‘I have always rather enjoyed being with mad or slightly dotty people; there is something liberating about being able sometimes to get away from the unspeakably worn-down, conventional paths, for the mind as well. I understand so well how it was that great folk in the old days felt their ménage to be incomplete without a jester, who should preferably not be quite all there’.[1] 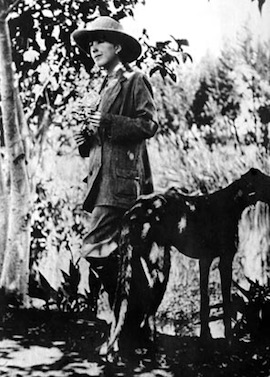 (Karen Blixen with one of her deerhounds, via http://blixen.dk/?lang=en)

We are still in the early stages of the book cull. Thirteen carrier bags to the charity shop so far; more to go. A small terraced house is (allegedly) not the most comfortable container for thousands of books (gathered over a long period: my wife and I were both booksellers for years). Some of this culling comes easily; some is hard; some impossible. A few of my solutions have been highly suspect. Recently, a second Library of America edition of work by Carson McCullers breezed in: those two volumes can now replace, yes, three paperbacks. One book less. It’s true that the two volumes take up more space than the three they replace; and they were more expensive. But damn! they do look good.

This second volume contains the complete stories, plays, essays, poems and autobiographical writings. After I’d ordered it—but before it arrived—I ordered a secondhand copy of Isak Dinesen’s Anecdotes of Destiny. I have other books by Dinesen: Last Tales, Seven Gothic Tales, Shadows on the Grass, Winter’s Tales, her Letters From Africa and, of course, Out of Africa, as well as the biography of Dinesen by Judith Thurman (who also wrote a very good one of Colette )—but I was missing that collection. What prompted me to order it was looking at a list of films I wanted either to watch or to watch again and remembering that I’d never actually seen the 1987 film Babette’s Feast (based on one of the stories in Anecdotes of Destiny), a Danish production directed by Gabriel Axel.

When the McCullers volume arrived, a few days ago, I opened it at random and immediately saw the name Isak Dinesen. Is there a unique category, a dedicated name for this sort of synchronicity specific to the world of books? Or is it just that, if you have a highly associative mind (one which retains a high density of that sort of material), those connections are apparent more widely and more frequently? I know that the moment for my reading a book I may have owned for months or even years is quite often decided by two or three references to it in different contexts. It’s a bit like the famous quote from Ian Fleming’s Goldfinger: ‘“Mr Bond, they have a saying in Chicago: ‘Once is happenstance. Twice is coincidence. The third time it’s enemy action’.”’ (Fleming used these categories as section titles in the novel: the quotation comes at the end of the second section.)

McCullers has two short pieces on Dinesen in this Library of America collection, the first on the volume called Winter’s Tales, the other an account which begins with McCullers being given, and reading, Out of Africa, published under the author’s real name, Karen Blixen. She realises that this is ‘one of the most radiant books’ of her life.[2] Subsequently, and unsurprisingly, she moves on to other books by that author: ‘When I was ill or out of sorts with the world, I would turn to Out of Africa, which never failed to comfort and support me—and when I wanted to be lifted out of my life, I would read Seven Gothic Tales or Winter’s Tales or, much later, The Last Tales.’[3]

The essay moves on to McCullers’ recollection of the Academy of Arts and Letters dinner in January 1959, at which Dinesen—in fact, the Baroness Karen Blixen-Finecke—was a guest of honour. They sat next to one another at dinner and, asked by Dinesen if she could arrange a meeting with Marilyn Monroe, McCullers said she could. On 5 February, Arthur Miller and Marilyn Monroe called for Dinesen and her companion Clara Svendsen, arriving ‘with the unpunctuality Marilyn was famous for’, and they all lunched with Carson McCullers, a meal including oysters, white grapes, champagne and a soufflé, laid out on McCullers’ ‘black marble table.’ Miller expressed concern about the extremely frail Dinesen’s standard menu—she’d said that, when oysters were out of season, she turned to asparagus—and recklessly mentioned ‘protein’. Dinesen replied that she didn’t know anything about that but she was old; she ate what she wanted and what agreed with her.[5]

Dinesen died on Friday 7 September 1962, of emaciation. Monroe had died barely a month before, on 5 August. Dinesen and McCullers had long admired one another’s work and Dinesen ‘loved’ McCullers but it was Marilyn Monroe who had made the deepest impression on her. ‘It is not that she is pretty,’ she wrote, ‘although of course she is almost incredibly pretty—but that she radiates at the same time unbounded vitality and a kind of unbelievable innocence.’[6]

Marilyn’s holding a copy of Ulysses and the book is open almost at the end, so she’s reading the final chapter, Molly Bloom’s soliloquy: ‘and then I asked him with my eyes to ask again yes and then he asked me would I yes to say yes my mountain flower and first I put my arms round him yes and drew him down to me so he could feel my breasts all perfume yes and his heart was going like mad and yes I said yes I will Yes.’[8]

[2] Carson McCullers, Stories, Plays, and Other Writings, edited by Carlos L. Dews (New York: Library of America, 2017), 479. William Maxwell commented of Blixen that ‘Nothing in the second half of her life corresponded to the sweep and grandeur of her life in Africa’: ‘Ideas of Honor and Aristocracy’, in The Outermost Dream: Essays and Reviews (New York: Knopf, 1989), 35.