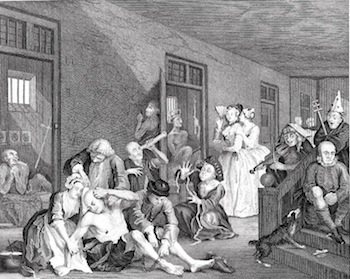 (‘Scene in Bedlam’: Plate VIII of Hogarth’s A Rake’s Progress.)

Hearing politicians declaim about ‘defence’ these days often puts me in mind of the anonymous poem, ‘Tom a Bedlam’ or ‘Tom o’Bedlam’s Song’, probably dating from the early seventeenth century if not before. Its last two verses are:

With an host of furious fancies,
Whereof I am commander.
With a burning spear
And a horse of Air,
To the wilderness I wander.

By a knight of ghosts and shadows,
I summoned am to tourney
Ten leagues beyond
The wild world’s end-
Methinks it is no journey.[1]

Phantasmal armies; equally phantasmal foes. Knowing the reality of what actually threatens us now, who are these enemies that can be defeated or discouraged by a massively expensive and inevitably anachronistic nuclear weapons system?

Following Jeremy Corbyn’s speech in the wake of the mass murder in Manchester, Theresa May, other Tories and the right-wing tabloids launched a predictable attack.

It’s only too possible that Michael Fallon didn’t wholly grasp what Mr Corbyn actually said. Certainly, on Channel 4 News, he dismissed a statement simply because he believed it to be by Jeremy Corbyn when in fact it was a quote from Boris Johnson. Theresa May would have understood what Jeremy Corbyn was saying but chose to wilfully misrepresent him, safe in the knowledge that most people would not have seen the text of his speech, and that a great many voters’ grasp of defence policy is hardly nuanced or anything much more than a drowsy assumption that Trident is something to do with an intelligent ‘defence policy’—rather than expressing a determination of the ‘size matters’ lobby to stay at the big table of the Security Council of the United Nations.

The primary misrepresentation was to pretend that Mr Corbyn had claimed that the Manchester atrocity and other terrorist acts were solely due to British foreign policy (though that pretence also entailed an apparent unfamiliarity with the English language’s distinction between ‘excuse’ and ‘explanation’). Neither he nor anyone else worth attending to would claim that this country’s foreign policy was the only factor but it would be naïve, misinformed or, frankly, deliberately misleading to claim that there is no connection whatsoever.[2]

Jeremy Corbyn actually said (in what was a perfectly reasonable and rational response): ‘We will also change what we do abroad. Many experts, including professionals in our intelligence and security services have pointed to the connections between wars our government has supported or fought in other countries, such as Libya, and terrorism here at home.
‘That assessment in no way reduces the guilt of those who attack our children. Those terrorists will forever be reviled and implacably held to account for their actions.
‘But an informed understanding of the causes of terrorism is an essential part of an effective response that will protect the security of our people, that fights rather than fuels terrorism.
‘Protecting this country requires us to be both strong against terrorism and strong against the causes of terrorism. The blame is with the terrorists, but if we are to protect our people we must be honest about what threatens our security.
‘Those causes certainly cannot be reduced to foreign policy decisions alone.’
‘And no rationale based on the actions of any government can remotely excuse, or even adequately explain, outrages like this week’s massacre. But we must be brave enough to admit the war on terror is simply not working. We need a smarter way to reduce the threat from countries that nurture terrorists and generate terrorism.’
‘So, let the quality of our debate, over the next fortnight, be worthy of the country we are proud to defend. Let’s have our arguments without impugning anyone’s patriotism and without diluting the unity with which we stand against terror.’

But it seems that we can’t do that in this country. We have to impugn, we have to dilute, we have to posture.

I am always busily resisting the temptation to align myself—mutatis mutandis—with the Major in J. G. Farrell’s novel Troubles, set during the Irish War of Independence:

‘The Major only glanced at the newspaper these days, tired of trying to comprehend a situation which defied comprehension, a war without battles or trenches. Why should one bother with the details: the raids for arms, the shootings of policemen, the intimidations? What could one learn from the details of chaos? Every now and then, however, he would become aware with a feeling of shock that, for all its lack of pattern, the situation was different, and always a little worse.’[3]

A language we only faintly remember

‘Natural objects—living things in particular—are like a language we only faintly remember. It is as if creation had been dismembered some­time in the past and all things are limbs we have lost that will make us whole only if we can recall them.’—Lewis Hyde, The Gift