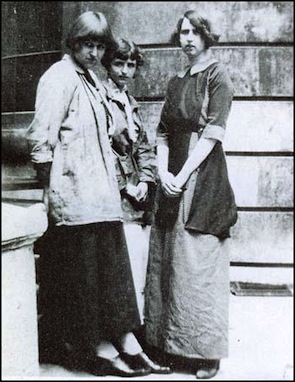 To Dorothy Brett, 1 December 1918, Aldous Huxley wrote: ‘I saw Carrington not long ago, just after the armistice, and thought her enchanting; which indeed I always do whenever I see her, losing my heart completely as long as she is on the spot, but recovering it as soon as she is no longer there. We went to see the show at the Omega, where there was what I thought an admirable Gertler and a good Duncan Grant and a rather jolly Vanessa Bell. Carrington and I had a long argument on the fruitful subject of virginity: I may say it was she who provoked it by saying that she intended to remain a vestal for the rest of her life. All expostulations on my part were vain.’[1]

Aldous Huxley and Dora Carrington spent time together at Lady Ottoline Morrell’s Garsington Manor, sleeping on the roof when the heat indoors became unbearable. ‘Strange adventures with birds, and peacocks, and hordes of bees. Shooting stars, other things.’[2] There’s little doubt that Huxley made use of Carrington when creating the character of Mary Bracegirdle in Crome Yellow. To Gerald Brenan in December 1921, Carrington remarked on the character, adding: ‘But it’s a book which makes one feel very very ill. I don’t advise you [to] read it.’[3] 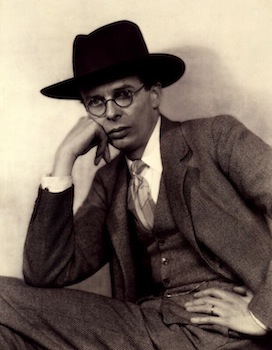 Aldous Huxley by Dorothy Wilding, © National Portrait Gallery, London. Probably not the right hat, then: ‘In later years he wore no hat—except occasionally a French beret—but then he still sported a black hat with a very large brim indeed, to all effects a sombrero. “Here”, the St John Hutchinson’s young children would cry when they saw his long form ambling up their garden path, “Here comes the Quangle-Wangle!”’[7]

In January 1919, Carrington experienced what her biographer terms ‘a disturbing dream about a furtive encounter with the creator of the virginal “Mary Bracegirdle” which took place in her mother’s house, only weeks after her father’s death’.[4] Carrington wrote to Strachey: ‘Such a nightmare last night, with Aldous in bed. Everything went wrong, I couldn’t lock the door; all the bolts were crooked. At last, I chained it with a watch chain to two nails. Then I had a new pair of thick pyjamas on and he got so cross because I wouldn’t take them off and they were all scratchy. Everything got in a mess, and he got so angry, and kept trying to find me in the bed by peering with his eye-glass, and I thought all the time how I could account to my mother for the mess on my pyjamas!’[5] 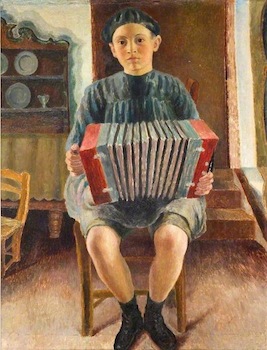 Carrington’s tendency to make such vivid impressions on those she met meant that confronting fictional versions of herself was a not infrequent ordeal. Gilbert Cannan’s Mendel: A Story of Youth (1916), dedicated to ‘D. C.’, had been a rather more brazen affair, drawing with little disguise on Carrington’s relationship with Mark Gertler: ‘How angry I am over Gilbert’s book! Everywhere this confounded gossip, and servant-like curiosity. It’s ugly, and so damned vulgar. People cannot be vulgar over a work of art, so it is Gilbert’s fault for writing as he did. . . . ’[6]

Lively stuff. The new collection of Carrington’s letters, edited by Anne Chisholm, biographer of Nancy Cunard and Frances Partridge, came out last week. We should finally get to the bookshop in the next few days and secure a copy. Somebody in the house is expecting it for Christmas. Apparently.

[2] To Lytton Strachey, August 1916, Carrington: Letters and Extracts from her Diaries, chosen and with an Introduction by David Garnett (New York: Holt, Rinehart and Winston, 1971), 35.

[3] Carrington: Letters and Extracts from her Diaries, 200.

[5] Carrington: Letters and Extracts from her Diaries, 127.

One thought on “Carrington and the Quangle-Wangle”