Exactly one hundred years ago today, there was a poetry reading, in aid of charity, held at the home of Lady Sibyl Colefax, later a highly successful interior decorator. Those taking part included Aldous Huxley, the actress and later playwright Viola Tree (daughter of Herbert Beerbohm Tree), Robert Nichols, T. S. Eliot and the Sitwells.

In a letter to his mother, some ten days later, Eliot told her: ‘I assisted in a poetry reading last week at the house of some rich person for the benefit of something. A hundred and fifty people were induced to pay 10/6 each, so it was rather a rich audience. Edmund Gosse presided, and a number of “young poets” of whom I believe I was the oldest, read. It was rather amusing, as the audience and most of the poets were very solemn, and I read some light satirical stuff, and some of them didn’t know what to make of it.’[1]

The broad-backed hippopotamus
Rests on his belly in the mud;
Although he seems so firm to us
He is merely flesh and blood.

Flesh and blood is weak and frail,
Susceptible to nervous shock;
While the True Church can never fail
For it is based upon a rock.

Forty years later, reading at Columbia, Eliot remarked: ‘This is a poem which I originally read, I remember, at a poetry reading for the benefit of some Red Cross affair with Sir Edmund Gosse in the chair, and he was profoundly shocked. On the other hand, the late Arnold Bennett liked it better than anything I’d written up to the time of his death, and kept asking me to write “another Hippopotamus.”. . . it’s the only poem of mine which I’ve any reason to suppose that James Joyce ever read.’ Eliot also read ‘A Cooking Egg’ at the charity event and, as Richard Aldington mentions in his autobiography, the poem’s  mention of Sir Alfred Mond provoked ‘a rumpus in the audience’, as Lady Mond ‘sailed indignantly out of the room’.[2]  (In fact, Joyce parodied The Waste Land in a letter to Harriet Weaver; and also wrote of it  in a notebook, ‘T. S. Eliot ends idea of poetry for ladies.’)[3]

Aldous Huxley was a little more expansive about the evening, in a letter of 13 December 1917 to his brother Julian. ‘I spent a strange day yesterday in town—being a performing poet for the sake of charity or something before a large expensive audience of the BEST PEOPLE. Gosse in the chair—the bloodiest little old man I have ever seen—dear Robbie Ross stage-managing, Bob Nichols thrusting himself to the fore as the leader of us young bards (bards was the sort of thing Gosse called us)—then myself, Viola Tree, a girl called McLeod and troops of Shufflebottoms, alias Sitwells bringing up the rear: last and best, Eliot. But oh—what a performance: Eliot and I were the only people who had any dignity: Bob Nichols raved and screamed and hooted and moaned his filthy war poems like a Lyceum villain who hasn’t learnt how to act: Viola Tree declaimed in a voice so syrupy and fruity and rich, that one felt quite cloyed and sick by two lines: the Shufflebottoms were respectable but terribly nervous: the Macleod became quite intoxicated by her own verses: Gosse was like a reciter at a penny reading. The best part of the whole affair was dinner at the Sitwells’ afterwards’.[4]

Nichols was one of the earliest war poets to achieve significant success. He was friends with both Graves and Sassoon—and Huxley, subsequently—and was close at hand when D. H. Lawrence died in March 1930 (Sybille Bedford prints his long letter to Dr Henry Head in her biography of Huxley).[5] Nichols’ poetry hasn’t lasted too well, unable as he was to evade the grip of the poetic conventions of the period even under the unprecedented pressures of the war.

They are bringing him down,
He looks at me wanly.
The bandages are brown,
Brown with mud, red only—
But how deep a red! in the breast of the shirt,
Deepening red too, as each whistling breath
Is drawn with the suck of a slow-filling squirt
While waxen cheeks waste to the pallor of death.
O my comrade![6] 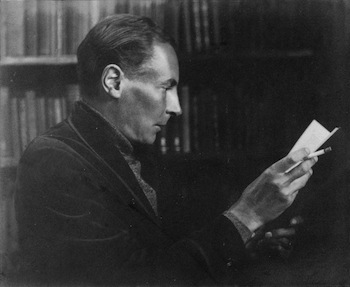 Aldous Huxley, on the other hand, is barely known as a poet even to those familiar with his novels and essays, though his first four published books were all volumes of poetry. While at Oxford, Robert Graves commented in a letter to Siegfried Sassoon, he had seen ‘a lot of the Garsington people [Lady Ottoline Morrell’s house] who were charming to me, and of the young Oxford poets, Aldous Huxley, Wilfred Childe and Thomas Earp – exceptionally nice people but a trifle decayed, as you might say.’[7]

In the previous year’s The Burning Wheel, Huxley—albeit a trifle decayed—had written ‘A Canal’:

No dip and dart of swallows wakes the black
Slumber of the canal: —a mirror dead
For lack of loveliness remembered
From ancient azures and green trees, for lack
of some white beauty given and flung back,
Secret, to her that gave: no sun has bled
To wake an echo here of answering red;
The surface stirs to no leaf’s wind-blown track. . .[8]

Garsington would loom larger for Sassoon a few months later when he went to consult Philip and Ottoline Morrell and ask their advice about his intended protest. Sassoon’s famous statement followed soon after his meeting in London with Bertrand Russell and Middleton Murry. Psychiatric treatment with W. H. R. Rivers at Craiglockhart—and a meeting with the young Wilfred Owen—beckoned.