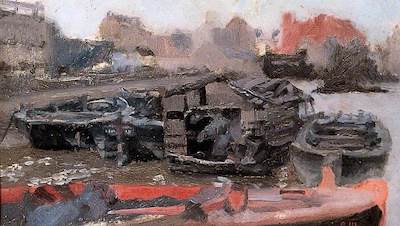 On a cold and blue and almost cloudless day, I pass through the park, between the bobbing magpies. Once you recognise the sight and sound of them, they’re everywhere. In our small garden yesterday, I watched a magpie take into its beak three, four, five suet pellets, and was put in mind of the fox.

Six or seven years ago, looking out of the window of my mother’s first-floor flat in Sutton, I would sometimes see foxes jogging along beside the railway line, about fifty metres away. At the end of the short garden was a garage with a flat roof and the downstairs neighbour used to throw food up onto it. One morning a fox appeared there – the roof was accessible from a low wall nearby. It took up items of food into its long jaws, meat and vegetables, five, six, seven pieces and, at the last, added a whole egg. Then it made its way down off the roof and emerged at the side of the track, all the food still apparently in place, undamaged, before padding off in the direction of home where, presumably, its cubs were waiting.

There are times when something occupying our minds or strongly present for a while—and it might be anything, from a car, a song or a woman’s name to a painting, a terrace of houses or a body of writing—exerts a powerful centripetal force. Details of things seen or heard fly to it and stick like burrs. Sounds and sights, images, phrases, connect with an audible click.

Since I’m reading or, mostly, rereading Penelope Fitzgerald’s books at present, when I walked in the park yesterday and heard the skirl of bagpipes launching into ‘Amazing Grace’, it was enough to recall the novel I’d just finished. Offshore, which won the Booker Prize in 1979, is set on the barges moored on Chelsea Reach and is dedicated ‘To Grace and all who sailed in her’. Grace is the name of the central character Nenna James’s barge, as it was the name of Fitzgerald’s, ‘a battered, patched, caulked, tar-blackened hulk’. The ‘great consolation was that a Thames barge, because of the camber of the deck, never sinks completely.’ On this point, Fitzgerald remarked, she could ‘give evidence, because we went down twice, and on both occasions the deck stayed just above water’, although Grace was finally ‘towed away to the Essex marshes to be broken up.’[1] After one of those disasters, Fitzgerald ‘went back to her teaching the next day, looking more than usually dishevelled, and said to her class: “I’m sorry I’m late, but my house sank.”’[2]

Similarly, thoughts of that fox recalled Fitzgerald’s letter in response to Frank Kermode’s review of her final novel, The Blue Flower, which centres on the life of the German Romantic poet Friedrich von Hardenberg, who wrote as ‘Novalis’. ‘I hope you won’t mind me writing to thank you for your review of The Blue Flower. I started from D. H. Lawrence’s “fatal flower of happiness” at the end of The Fox, having always wondered how DHL knew it was blue, and never quite managed to find out all I wanted to, partly because Novalis’ letters to Sophie have disappeared, buried in her grave I daresay.’[3]

Kermode had written of Fitzgerald: ‘She has the gift of knowing, or seeming to know, everything necessary, and as it were knowing it from the inside, conveying it by gleams and fractions, leaving those who feel so disposed to make it explicit.’ And, of the object of Fritz’s quest, ‘The visionary blue flower dominates his imagination, but in the waking life of Fritz von Hardenberg the part of the flower was played by Sophie von Kühn’.[4]

Sophie was the twelve-year-old girl with whom the poet fell in love. They became engaged on her thirteenth birthday but she died of tuberculosis just two years later. Novalis himself died before reaching thirty.

The end of ‘The Fox’ has ‘poor March’ musing on how, ‘The more you reached after the fatal flower of happiness, which trembles so blue and lovely in a crevice just beyond your grasp, the more fearfully you became aware of the ghastly and awful gulf of the precipice below you, into which you will inevitably plunge, as into the bottomless pit, if you reach any further. You pluck flower after flower – it is never the flower.’[5]

And the ending of Offshore? The two weakest characters, drunk and more than usually incapable, drift off in the storm, when the anchor comes clear and the mooring-ropes pull free under the strain. ‘It was in this way that Maurice, with the two of them clinging on for dear life, put out on the tide.’[6]

A craft that should be firmly linked to those of its close neighbours becoming unmoored and drifting off into the open sea because of intoxicated incompetence. Not a fable for our time, obviously.