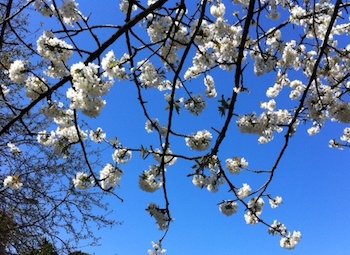 The first important news of the day, conveyed by the Librarian, is of a stand-off between two cats in the back garden, interrupted by the magpie with the screw-you attitude. It sometimes taunts the cat by raiding the bird table under its nose—and does so now under two such noses.

Making breakfast, I keep an eye on the dramatically upgraded arrangement for the birds—metal not wood, and taller, very like the lamp post in Narnia, scene of the first encounter between Lucy and Mr Tumnus. The female blackbird has cottoned on quickly; the male, not so much. Upstairs, the Librarian berates Nick Robinson for his woeful line of questioning of John McDonnell. And it is, of course, The Day: in fact, the newspapers and radio and television bulletins are awash with items for which I’m not the target audience, notably royal weddings and cup finals. I realise that huge numbers of people are drawn to these things but, as with, say, piercings, barbecues, tattoos, reality shows and holidays in ‘exotic’ places, they’re not really for me. Luckily—though some folk display a frightening propensity for forcing their views upon others—there’s generally enough world to go round, so that we can follow our own tastes and inclinations, leaving others to theirs.

‘I know you don’t like Michelangelo’, Ford Madox Ford wrote in a poem addressed to the partner of his last decade, the painter Janice Biala:

‘But the Universe is very large, having room
Within it for infinities of Gods
All co-existing, much as you and I
Drudge on, engrossed by paper or on canvas,
You in that corner, I, in this, our thoughts
Going side by side for years and years and years’.

Okay. So we have books and journals, the diversions of wildlife and gardening, food to prepare for a daughter’s visit later—and yet, and yet, there is always the nagging pull of spectacle, theatre, candyfloss and popcorn: and the Librarian is making worrying suggestions about cucumber sandwiches, even mentioning Pimm’s and lemonade. . .