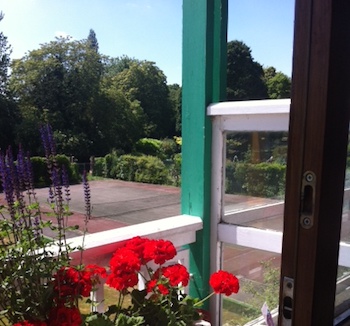 The weather continues hot, certainly by British standards. I recall the opening of Samuel Beckett’s first novel as ‘The sun shone, having no alternative, on the nothing new. Murphy sat out of it’, pausing there because I can’t remember what comes next (my copy is in a box ‘at another location’, as they say in the storage business), except that it places Murphy somewhere in London, a hundred and twenty miles from my desk. But certainly, as far as is possible, I sit out of it.

If I need to go out, I go as early as I can. In the park, small groups, especially the ones with small children, arrange themselves sensibly under the trees,. A few reckless or uninformed individuals sprawl asleep on unprotected slopes of grass. Small dogs race after balls and squeaky toys. A man and a woman are sitting together on the bench beside the path I’m walking down, with home almost in sight. A terrier races back towards the bench with a rubber ring between its teeth. “Good boy’, says the man. ‘Good girl’, says the woman. Good grief, I think, even the dog has gender issues.

Fourth of July, America’s Independence Day, has been and gone, largely drowned here by the roars of football fans and the smack of racquet on ball at Wimbledon; and muffled too, perhaps, by uncertainty about what precisely independence signifies, truth, equality, liberty and happiness having become so oddly complicated of late.

‘And the American dream isn’t dead, either – we just have no idea what it means any more.’ Sarah Churchwell wrote in Behold, America, reviewed in this week’s TLS.

Brexit, alas, is not dead either: but then nobody—whether unemployed metal workers, rural Tories, billionaire fixers, market traders, Scottish trawler men, barstool economists or, indeed, the people supposedly in charge of the process—ever really knew what that meant and certainly couldn’t agree on what it meant.

‘The acts of people are baffling unless we realize that their wits are disordered’, Edward Dahlberg once wrote. Reviewing the latest sequence in our long-running Punch and Judy show, one can only nod and raise a glass to the man Jonathan Williams called ‘the Job of American Letters’.