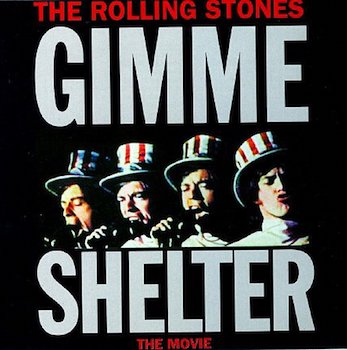 Listening again to the opening riff of the Rolling Stones’ Gimme Shelter, I think: ‘This is genius’. Coming up to fifty years ago—it was the opening track on Let It Bleed (1969)—Keith Richards playing an open tuning on a Maton EG240 Supreme, which he was ‘looking after’ for a friend. It sounded great, Richards said, although, on the very last note of Gimme Shelter, ‘the whole neck fell off. You can hear it on the original take.’ (www.guitarworld.com) If your guitar needs looking after, leave it with Keith.

‘This is genius’. If that statement doesn’t conjure up the phrase, ‘Excellency, a few goats’, you probably don’t spend a disproportionate amount of your time on such curious characters as Ford Madox Ford and Joseph Conrad. Ford is writing here of himself in the third person: ‘But no sooner had he got the words on the paper than Conrad burst into one of his roars of ecstasy. “This,” he shouted when he was in a condition to speak, “is genius!” And out of breath, exhausted and rolling on the sofa, he continued to gasp, “Genius I … This is genius…. That’s what it is. Pure genius…. Genius, I tell you!” The writer agreed that it was genius—for the sake of peace!’[1]

The occasion for this outburst was Ford’s reading to his collaborator a sentence written ‘in a quite commonplace frame of mind’, to ‘provide an obscure Lugareño [local, villager] with a plausible occupation’ – the man is being interrogated by the judge as to how he makes his living – hence the reply: ‘“Excellency—a few goats. . . . ”’[2] In Ford’s telling, Conrad recurred to this example of writerly precision and concision with great frequency for years afterwards.

‘Genius’ – or, as Ford termed it elsewhere, ‘that terrible word “genius”’. He had, after all, come out of ‘the hot-house atmosphere of Pre-Raphaelism where I was being trained for a genius.’[3] Fondly recalling his grandfather once more, forty years after Ford Madox Brown’s death, he wrote: ‘He was, I imagine, the best, the most honorable, the most generous, and the most optimistic of men. For him all geese were swans and all his children and grandchildren geniuses. That was what he asked of life—and to be allowed to go on working.’[4]

Terrible the word may have been but it recurs with striking frequency in Ford’s work (and the work of a great many others too, it’s only fair to add). It certainly did the rounds of the circle of fellow-writers with whom Ford was more usually associated. In 1913, he would note Henry James’s application of the phrase ‘the beautiful genius’ to Ivan Turgenev; in 1927, he would apply the same phrase to Stephen Crane and also referred to Conrad in just that way.[5] 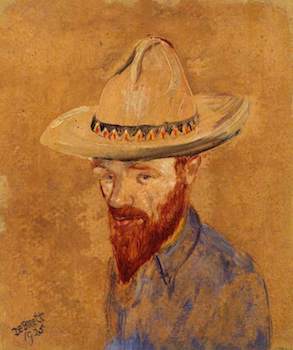 D. H. Lawrence too found himself in the firing-line. In ‘Autobiographical Sketch’, he recalled showing the manuscript of his first novel, The White Peacock, to Ford, who read it immediately. ‘And in his queer voice, when we were in an omnibus in London, he shouted in my ear: “It’s got every fault that the English novel can have.”’ Lawrence remarks that, ‘Just then the English novel was supposed to have so many faults, in comparison with the French, that it was hardly allowed to exist at all. “But,” shouted Hueffer in the ’bus, “you’ve got GENIUS.”’ Lawrence goes on to say that, ‘This made me want to laugh, it sounded so comical. In the early days they were always telling me I had got genius, as if to console me for not having their own incomparable advantages.
‘But Hueffer didn’t mean that. I always thought he had a bit of genius himself.’[6]

So did Ford’s friend Olive Garnett, who unleashed the offending word in a diary entry of March 1892. Commenting on a man named Henry Cecil Sturt, who worked at the British Museum, she wrote: “I couldn’t help contrasting him & Ford & the two arguments. He representing solid worth, clear & elaborate construction; Ford, unreliability, inaccuracy &—genius . . . ’[7]

Ezra Pound seemed not to have any problem with the word, writing home in 1908: ‘You have my hearty sympathy for having possibility of genius in the family but I suppose it cant be helped.’[8] And he would supply a lucid enough explanation for that quality in the Roman poet Propertius:

Yet you ask on what account I write so many love lyrics
And whence this soft book comes into my mouth.
Neither Calliope nor Apollo sung these things into my ear,
My genius is no more than a girl.

The poet goes on to enlarge upon this:

If she with ivory fingers drive a tune through the lyre,
We look at the process.
How easy the moving fingers; if hair is mussed on her forehead,
If she goes in a gleam of Cos, in a slither of dyed stuff,
There is a volume in the matter; if her eyelids sink into sleep,
There are new jobs for the author;
And if she plays with me with her shirt off,
We shall construct many Iliads.
And whatever she does or says
We shall spin long yarns out of nothing.[9]

Towards the end of his life, Ford specified one danger of using the word in connection with writers: ‘Really to account for how Jane Austen and Richardson achieved their masterpieces one has to resort to the very dangerous expedient of saying that they must have been natural geniuses. That is dangerous because once you make the concession the whole cry of hounds of the professorio-academic pack will be on your back, shouting: “You see, when it comes to real works of art this fellow has to admit that they can only be produced autochthonously—by writers and others who follow no traditions and know no aesthetic law.” With the corollary that artists who do follow traditions and aesthetic rules are dull fellows whom nobody loves.’[10]

Danger, genius at work! Yes, explanations are not always forthcoming or particularly helpful when they do arrive. Hugh Kenner remarks that ‘the biographer’s is the tested American strategy for doing something about unassimilable phenomena like Howard Hughes and literary genius.’[11] The dictionary can help with that one – ‘assimilable’: able to be taken fully into the mind; or made similar; or received and accepted fully into a group.

With this word in mind, I circle back to Lawrence, who had his faults but also, we remember, genius. Here he is, writing in 1921: ‘The moment has come when America, that extremist in world-assimilation and world-oneness, is reacting into violent egocentricity, a truly Amerindian egocentricity. As sure as fate we are on the brink of American empire.’[12]

A language we only faintly remember

‘Natural objects—living things in particular—are like a language we only faintly remember. It is as if creation had been dismembered some­time in the past and all things are limbs we have lost that will make us whole only if we can recall them.’—Lewis Hyde, The Gift