(Berwick-on-Tweed, via The Guardian)

In January 1923, Ezra Pound wrote: ‘Les guerres de Napoléon having interrupted communications between the islanders and the rest of the world, the light of the eighteenth century was lost, Landor went into exile, the inhabitants of Berwick and Sussex existed in darkness, England as a whole fell back into the tenebrosities of the counter reformation, and has remained there ever since.’[1]

Ah, those tenebrosities. Hello, darkness, my old friend, as we are practising saying. But the light of the eighteenth century? Pound is less likely to be pointing to Samuel Johnson, Pope, Crabbe, Burke and Swift than, given the context and his Francophile tendencies, the Encyclopaedists, Voltaire, Diderot, Montesquieu.

(Some 18th century light: William Blake, The Ancient of Days)

‘If Pound’s Enlightenment, with its stress on Bayle, Voltaire, a few historians, and the antecedents of Revolutionary America, is not precisely that of the eighteenth-century specialist, that is because of the sharp selection and re-emphasis incident to solving a poetic problem located two centuries later’, Hugh Kenner remarked, that ‘problem’ being Pound’s need to ‘break free from Rossetti, “the nineties” and the opalescent word’.[2] 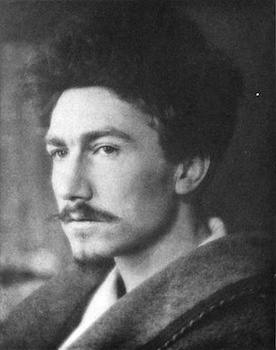 As for those inhabitants of Berwick and Sussex – it could be a straightforward ‘north’ and ‘south’ of England: still, for the latter, there had been Pound’s three winters (1913-1916) at Stone Cottage at the edge of Ashdown Forest, as ‘secretary’ to William Butler Yeats.[3] Then, too, in the summer of 1920, Pound had visited his friend Ford Madox Ford in Bedham: ‘And Mr. Pound appeared, aloft on the seat of my immense dog-cart, like a bewildered Stuart pretender visiting a repellent portion of his realms. For Mr. Pound hated the country, though I will put it on record that he can carve a sucking pig as few others can. With him I quarrelled about vers libres and he shortly afterwards left England and acquired his mastery of the more resounding rhythms.’[4]

And then – Berwick. In the summer of 1914, as Ford recalled it nearly twenty years later, ‘I went home to pack my things. Next morning I was on the high platform of Berwick station. Berwick town is in Berwickshire and Berwickshire is in Scotland. But Berwick town is neither English nor Scottish. It is “juist Berwick”. The King’s proclamations are ordered to be affixed to the church doors of England, Scotland, Wales and Ireland and the town of Berwick-on-Tweed.’ Then, putting down the newspaper, Ford catches sight of a three-line paragraph, ‘tucked away at the bottom of a page and headed minutely: AUSTRIAN HEIR MURDERED IN SARAJEVO. It was London’s news of the 28th June, 1914, reaching me there in a border town.’[5]

A little nearer in time to the events described, he shifts that moment forward a few weeks, writing that, ‘On the morning of 20th July, 1914, I stood upon the platform of Berwick-on-Tweed station, reading the London papers.’[6] Max Saunders discusses the conflicting dates with his usual thoroughness and accuracy.[7]

Ford was at Berwick-on-Tweed to catch the train on to Duns, where he and Violet Hunt had been invited to a house party by the novelist Mary Borden, who had rented Duns Manor with her husband, George Turner. The other houseguests included E. M. Forster and Wyndham Lewis (with whom Borden was having an affair).[8] Pound was not present but was in close contact with both Ford and Lewis (whose fictional rendering of the occasion, ‘The Country House Party, Scotland’, remained unpublished in his lifetime, though a version appears in his first autobiographical volume, Blasting and Bombardiering.[9]

At that time, Borden had published only one novel and a play, both under the name of ‘Bridget MacLagan’. She eventually produced twenty-five books, publishing well into the 1950s: the most highly regarded probably remains The Forbidden Zone, a collection of sketches and poems finally published in 1929. In both world wars, Borden set up and ran mobile hospitals in France, close to the front line, making full use of her wealth and contacts but also demonstrating immense personal courage and endurance. She was awarded the Croix de Guerre and made a member of the Légion d’honneur. After the fall of France in 1940, and a circuitous, hair-raising journey home, Borden ended up running a hospital in the Western Desert, spending time in Syria and Lebanon. She died in December 1968.[10]

Mary Borden working at a Field Hospital in France:
https://modernismmodernity.org/articles/war-experience-modernist-noise

Duns, the county town of Berwickshire, bordered the twin parishes of Bunkle and Preston, in which Ford’s great-grandfather, the physician John Brown had been born in the winter of 1735-36. In The Spirit of the People,[11] Ford again referred to Berwick-on-Tweed as if it were a separate entity, neither Scottish nor English and, a few years later, in his novel of border country, The Young Lovell, he has the Earl of Northumberland read to Margaret from an old document: ‘And when he had done with Hotspur, the Earl went on to read of the fate of the father of Hotspur, Henry, the Fourth Lord Percy of Alnwick. This lord fell at Bramham Moor fighting against King Henry IV, as Hotspur had done at Hately Field, fighting against the same King four years before. This lord’s head and quarters were placed upon London Bridge: one quarter upon the gate of York, another at Newcastle, and yet further pieces at King’s Lynn and Berwick- on-Tweed.’[12]

That seems to add up to five quarters, a miscounting to set beside Murphy’s scarves in Samuel Beckett’s novel (the text says seven but accounts for only six). In a letter to Hugh Kenner, referring to Guy Davenport’s work on the drawings for The Stoic Comedians, Beckett wrote: ‘I wonder where he will place that 7th scarf.’ In fact, Davenport used eight.[13]

Ford worked Berwick and the return journey to London into the first volume of the Tietjens tetralogy;[14] and Berwick is there again more than a decade later, ‘the patient New Yorker’ reading in Malory’s Morte d’Arthur Sir Gawaine’s letter to Sir Launcelot, telling him that he had been smitten upon the old wound received from Launcelot ‘afore the cité of Benwyke, and thorow that wounde I am com to my deth-day.’[15]

Dante Gabriel Rossetti, How Sir Galahad, Sir Bors and Sir Percival Were Fed with the Sanct Grael; but Sir Percival’s Sister Died by the Way (1864): Tate

There’s an obvious affinity between Ford (Englishman, German father, lived in France and America, published across two centuries, modernist who doesn’t quite fit the template), who wrote often—explicitly and implicitly—about borders, and Berwick, the northernmost town in England, at the mouth of a river which runs across the Anglo-Scottish border, a town which was at one time in Scotland, some of whose inhabitants regard themselves as English, some Scottish, others simply as Berwickers.

Fertile ground for the arts, then, borders – but in the wider world they can be lethal. . .