‘I think that, as I say, in England, living as if we are not part of Europe, we are living against the grain of what is nourishing to our artists, do you see? There seems to be an ingrown psychological thing about it, I don’t know why it is. You can see it reflected even in quite primitive ways like this market business now—the European Common Market. It’s purely psychological, the feeling that we are too damned superior to join this bunch of continentals in anything they do. And I think that’s why it is so vitally important for young artists to identify more and more with Europe. As for me, I have joined the Common Market, as it were. But, mind you, that doesn’t qualify one’s origins or one’s attitude to things. I mean if I’m writing, I’m writing for England—and so long as I write English it will be for England that I have to write.’

(Lawrence Durrell—born 27 February 1912: happy birthday, Larry—interviewed by Julian Mitchell and Gene Andrewski, 23 April 1959,[1] fourteen years before the United Kingdom joined what was then the EEC (European Economic Community). Two years later, a referendum resulted in a 67.2% vote in favour of remaining in the EEC.)

‘I shall never live in England again’, Katherine Mansfield wrote to Sydney Waterlow, ‘I recognise England’s admirable qualities, but we simply don’t get on. We have nothing to say to each other, we are always meeting as strangers.’[2] Of course, that ‘never’ turned out to have strict limits since, less than two years after writing her letter, Mansfield was dead, at the age of thirty-four.

A hundred years on; there are still some ‘admirable qualities’ (my choices wouldn’t be everybody’s) and I shall certainly go on living in England. That ‘meeting as strangers’, though, crops up a lot just lately. Good grief, how many times can you ask the question—of the empty air or, indeed, of a Librarian—‘What is wrong with these people?’ 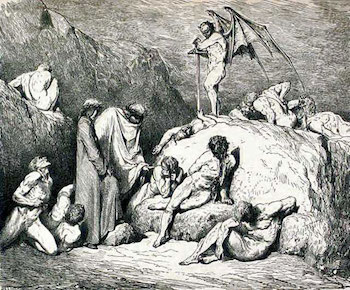 (Gustave Doré, ‘Punishment of the Sowers of Discord’ (1890), illustration for Dante’s Inferno)

The end-of-pier show lurched into literature following Donald Tusk’s studied musing into a microphone as to ‘what the special place in hell looks like for those who promoted Brexit without even a sketch of a plan how to carry it out safely’. Letter-writers determinedly sited the miscreants in Dante’s Inferno. I remember one suggestion that the ‘special place’ might be the poet’s eighth Bolgia or ditch, where the souls of deceivers and false counsellors are found, though I’d been thinking of the ninth one, where the sowers of discord are given a very hard time by a large demon equipped with a sharp sword. But of course, it might not be a special place at all and they may just be pitchforked in with the rest of the riff-raff.

There were people in the public sphere to be admired – but they all seemed to be under voting age – the twelve year old journalist Hilde Lysak, for instance (https://www.theguardian.com/us-news/2019/feb/24/hilde-lysak-police-officer-arrest-video) and the thousands of schoolchildren striking in protest at the feeble gestures made by the political class towards combatting climate change and environmental crisis, inspired by the example of the – now – sixteen year old Swede Greta Thunberg. The criticism of this demonstration from Downing Street and in the columns of one or two professional dimwits rather strengthened the case made by other commentators that the only adults in the room seemed to be, ah, children. The young environmental activists were acting in concert in the face of a planetary disaster. In the House of Commons, even the imminence of a national disaster couldn’t affect the posturing and squabbling and the exorbitant influence on Government policy exerted by a gaggle of fops, chancers and wide-boys.

Still, as a friend remarked to me yesterday, although the situation seems always the same it also seems to be constantly changing, a bizarre but discernible feature. So the Labour leadership has, at that familiar glacial pace, finally arrived at allowing, if not actually supporting, the idea of a People’s Vote, turning up at the party with a bottle of cheap white wine as the ashtrays are being emptied, the floors swept and the lights turned out. It could all, as they say, have been so different. But when historic opportunities come along, the relevant people need to be looking in the right direction.