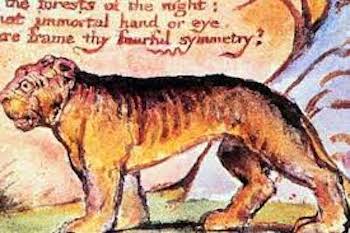 ‘Yes’, William Carlos Williams wrote to Ezra Pound on 14 June 1932, ‘I have wanted to kick myself (as you suggest) for not realizing more about Ford Maddox’s [sic] verse. If he were not so unapproachable, so gone nowadays. I want to but it is not to be done. Also he is too much like my father was – too English for me ever to be able to talk with him animal to animal.’[1]

That phrase would recur more than twenty-five years later, when Williams asked Hugh Kenner whether it might be possible to talk to T. S. Eliot ‘animal to animal’.[2] Ford and Williams became closer in the last year of Ford’s life, when he founded the Friends of William Carlos Williams.[3] Still, animal to animal. . . was there enough common ground for words to mean the same things to both parties? Would each of them even recognise the other’s direction of travel? Were their aims and ideals comparable, perhaps even within touching distance? Could they connect?

We accept we are animals; or no, it’s those others that are animals; some animal traits we see in humans, some human traits in our dogs, cats, horses. ‘Funny buggers the human animals’, David Jones wrote to Tom Burns, while Llewellyn Powys referred to ‘that escaped, brain-mad animal, man’ and, in order to escape the human into a dreamed world, immaterial and eternal, William Butler Yeats wrote:

Consume my heart away; sick with desire
And fastened to a dying animal
It knows not what it is; and gather me
Into the artifice of eternity.[5]

Guy Davenport remarks that, ‘Odysseus declining the stupidities of hallucination and Akhilleus taming the animal within himself end one age of Greece.’ And here is the philosopher George Santayana in a later Davenport story, ‘Dinner at the Bank of England’:

The unexamined life is eminently worth living, were anyone so fortunate. It would be the life of an animal, brave and alert, with instincts instead of opinions and decisions, loyalty to mate and cubs, to the pack. It might, for all we know, be a life of richest interest and happiness. Dogs dream. The quickened spirit of the eagle circling in high cold air is beyond our imagination. The placidity of cattle shames the Stoic, and what critic has the acumen of the cat? We have used the majesty of the lion as a symbol of royalty, the wide-eyed stare of owls for wisdom, the mild beauty of the dove for the spirit of God.[6]

Of T. H. White, author of both The Goshawk and The Once and Future King, David Garnett recalled: ‘Tim was not a mere devotee of blood sports, he was a naturalist with a gift for sharing the instincts and prejudices of all the animals he hunted or domesticated. Thus he could really enter into the soul of a hawk, or a fox, or a wild goose, or a badger. His description of Merlin’s education of Arthur in The Sword in the Stone is not a piece of fanciful writing, but full of his own experience.’[7] Patrick White wrote of his character, Miss Hare: ‘Now she recalled with nostalgia occasions when she had lost her identity in those of trees, bushes, inanimate objects, or entered into the minds of animals, of which the desires were unequivocal or honest.’[8] Some ten thousand years before the present, Julia Blackburn writes, ‘A man is preparing to go out hunting. In order to achieve the death of the animal that is to be hunted, he must become the animal. Inhabiting that other body is the first step towards possessing it.’[9]

That recognised and lived closeness of the worlds of human and animal is certainly an integral part of cultures both ancient and modern. In Tolstoy’s War and Peace, Natasha speaks of recalling memories until one remembers what happened before one was in the world. ‘“That’s metempsychosis,’ said Sonya, who had always been a good scholar and remembered what she learned. “The Egyptians used to believe that our souls once inhabited the bodies of animals, and will return into animals again.”’ And Carlo Levi, exiled by the Mussolini regime to Gagliano in the Lucania region of Italy, wrote: ‘The deities of the state and the city can find no worshippers here on the land where the wolf and the ancient black boar reign supreme, where there is no wall between the world of men and the world of animals and spirits, between the leaves of the trees above and the roots below.’[10]

No wall. So near and yet so far away. Reading aloud, animal to animal, I accept the cat as prospective audience – but he keeps his own counsel and, I notice, makes no comment at all.