Here’s a recent arrival: Enjoying Paintings, edited by David Piper, a Pelican Original (at twelve shillings and sixpence), published in 1964. I ordered my secondhand copy at the prompting of a few lines by Guy Davenport—another prodigious instigator of book purchases and readings, not unlike his admired Ezra Pound.

In March 1966, Davenport wrote to Hugh Kenner: ‘[Rene] Odlin tells me the Egyptians wrote letters to the dead, the temple being the post office.’ A month later, he advised: ‘Do add the Penguin Enjoying Paintings to your library (ed. David Piper) – contains essays on specific works by essayists who write in the gracious olden manner. Ayrton on Watteau, for instance. Piper on Holbein also excellent. And an essay on Stanley Spencer’s Resurrection in Cookham Churchyard, that has moved me more than any contemporary work of English painting. And more than anything in American painting.’[1]

Davenport didn’t say that this essay is by the painter Carel Weight, one or two of whose early paintings are a little reminiscent of Spencer’s own, nor did he mention, and may not have known, that Spencer also wrote letters to the dead, specifically to his first wife Hilda, beginning with a December 1950 letter and continuing until his own death nine years later. At no point did Spencer refer to her being dead. Some of the letters ran to a hundred pages.[2] More than fifty years after his own death, his younger daughter Unity, herself a painter, ends her autobiography, Lucky to be an Artist, with a moving letter addressed to her father.[3]

This very high value placed on Spencer’s painting is introduced fairly abruptly but Davenport’s interest in him manifested itself many times and in several contexts.

The attractions of Spencer’s work seem to have been the painter’s direct engagement with a world which is there, the human body crucially a part of its natural beauty; pictures often crowded with puzzling details that required an intense and knowledgeable gaze; and a figure of the kind that he felt too often evaded conventional critical and historical habits of classification. Davenport’s enthusiasms frequently tended to be for the maverick, the misunderstood, the overlooked, the misread and the misrepresented.

‘Christ Preaching at the Henley Regatta’, Davenport’s story in Eclogues, plays on Spencer’s Christ Preaching at the Cookham Regatta, a painting ‘made of a collage of elements: Dufy, Mallarmé, et d’autres choses.’[4] A few years later, Davenport’s essay ‘Stanley Spencer and David Jones’ begins by pointing to Roger Fry’s part in what was ‘a necessary revolution’ but one which had unforeseen consequences. The hierarchical placement of technique over subject ‘calcified into a dogma: the subject of a work of art is negligible.’ So a good many British artists largely disappeared from serious critical consideration. Davenport views Spencer and Jones as ‘spiritual twins’, together constituting ‘a thoroughly British phenomenon: nonmodernist modernism.’ He adds that, ‘The meaning of a work of art is efficacious only insofar as its charm elicits a response. Thus a new kind of art, like Spencer’s and Jones’s, must educate an audience before it can communicate.’ He remarks also that: ‘Modernism has been owned and operated by various groups with their own interests to look after.’[5] In an essay from the early 1940s, David Jones wrote: ‘“All must be safely gathered in”, as Mr Stanley Spencer said to me, with reference to the making of a picture (a more apt expression of the artist’s business I never heard).’[6] 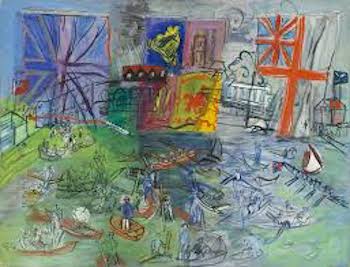 In an essay on Jonathan Williams, Davenport discusses English eccentricity, then the tradition stemming from Blake’s Ancients, seeing it for the most part as ‘a tangled and untraced path in and out of official literature and art.’ He mentions Charles Doughty, Tolkien, Edith Sitwell, Bruckner – and Stanley Spencer: ‘we await the historian of these visionaries.’[7] Elsewhere he suggests that Balthus and Spencer ‘illuminate each other’, the latter’s ‘intrepid religious grounding’ comparable to Balthus’ ‘privileged, undisclosed, but articulate psychology’, both of them expressing ‘a sensual delight in the material world that is openly hedonistic’. Davenport sees Balthus in ‘the distinguished category of the unclassifiable, like Wyndham Lewis and Stanley Spencer’, remarking that, ‘If modernity ended by trivializing its revolution (conspicuous novelty displacing creativity), it also has a new life awaiting it in a retrospective survey of what it failed to include in its sense of itself.’[8]

Most evidently, there is, in Thasos and Ohio—a selection of Davenport’s poems and translations—The Resurrection in Cookham Churchyard, which opens the book:

The Cookham dead begin to rise
When God with April in his eyes
Ended in O its midst the night.
To dogwood flowered hard and white,
To rain and violets overhead,
Sharp music lifted up the dead,
In cuckoo song and silence born,
A silver brilliant hunting horn.

In the following 212 lines, fifty or so named figures arise—a touch of verbal equivalence to the Jann Haworth and Peter Blake design for the sleeve of Sgt. Pepper’s Lonely Hearts Club Band—many of them familiar from other Davenport writings: Michael Ventris, who deciphered the Linear B script, Ruskin, Alan Turing, Charles Doughty, Hugh Miller, Christina Rossetti, Wittgenstein, Henri Rousseau, Babbage, Stan Laurel (also on the Beatles album cover, together with Oliver Hardy) – and Spencer himself, of course.

And Stanley Spencer rose upright,
Who, naked as a swimmer, stood
As best his sleepy body could
Beside his tombstone while his wise
And deep and dark untroubled eyes
Watched the startled, exultant dead
Take flesh of fire in flesh’s stead.[9]

Stanley Spencer wrote of his painting: ‘The resurrection is meant to indicate the passing of the state of non-realization of the possibilities of heaven in this life to the sudden awakening to the fact. This is what is inspiring the people as they resurrect, namely the new meaning they find in what they had seen before.’[10]

The Resurrection in Cookham Churchyard is a huge – 108 x 216 in/ 274 x 549 cm – painting, begun in 1924 and completed in 1926. ‘He painted it in a small room over a public house in the Vale of Health, Hampstead. Outside was a fairground, and Spencer used to say that the only way he could ever get far enough to see his picture as a whole was “to have two pennyworth on the swings” and glimpse it as he shot by the window.’[11] That’s a wonderful image. Penelope Fitzgerald, born in 1916, wrote to Howard Woolmer in 1990, ‘I’m glad you like the Spencer Resurrection and the Cookham pictures – I used to be taken to see them when I was quite small, and indeed Stanley Spencer was a familiar sight on Hampstead Heath in those days with his pram full of canvases.’[12]

There were many resurrections in Spencer’s body of work but The Resurrection in Cookham Churchyard represented, he thought, a consummation of all his work up to that point.[13] There are many interpretations of it but I doubt if anyone feels confident that they’ve plumbed its depths, not least because, as Carel Weight remarks, the painting is ‘a great piece of autobiography which can tell you more about its author and his immediate family than any self-portrait could have done’.[14] So Spencer’s wife Hilda appears at least three times and his favourite dresses of hers a couple times more; his brother-in-law Richard Carline is there two or three times, and Spencer himself twice.

As against Wyndham Lewis—‘The lines define, the surfaces are expanses of ink or graphite or paint, NOT cloth or flesh or any texture whatever’—Spencer, ‘by contrast, painted textures only.’[15] Spencer was ‘before all else a poet for whom the natural beauty of the world [ . . . ] was the primary fact.’ Of Spencer’s extensive and unfinished series, Christ Preaching at the Cookham Regatta, Davenport wrote that it was going to be ‘a very crowded. Bosch-like tangle of people, picnicking, and punts. A great deal of eighteenth-century British humor comes from too many people in a space (Rowlandson, Hogarth, Smollett). This very British theme becomes for Spencer an objet-petit-a [Jacques Lacan’s unattainable object of desire], an intimacy with gratuitous sensual content’. Spencer’s art exemplifies ‘an insistence that the world (not a world created ideally by a choice of attentions) is there.’[16]

Though he spent time during the First World War in the Beaufort War Hospital and later served in Macedonia, experiences which had a huge and lasting effect upon him—and resulted in some extraordinary pictures—the centre of his life and art was Cookham. There’s a world in William Faulkner’s Yoknapatawpha, in Thomas Hardy’s Wessex and in William Carlos Williams’ Rutherford – there’s one more distinction in Spencer’s case, which is the erasure of that line between the secular and the holy, between the human, godly and angelic realms. ‘Everything is holy and everything is connected’, Alexandra Harris wrote of Spencer’s work.[17] And so it is.