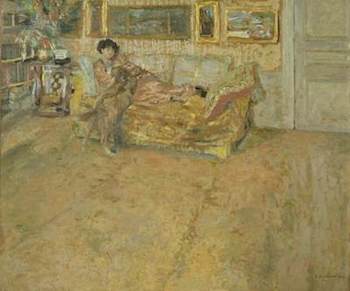 ‘What would you like to do on your birthday?’

The time before last that I lunched with the Librarian, she steered me to the excellent Sotiris Bakery for spanakopita and a Greek coffee (and some halva and cakes to take away), after which I drifted into the Bristol Museum & Art Gallery to visit a few favourites, including Vuillard’s portrait of Lucie Hessel and her dog.

Lucie Hessel—friend, muse, lover of Vuillard—was the wife of the art dealer Joss Hessel: they remained close friends for many years with Vuillard, to whom they offered constant hospitality in their Rue de Rivoli apartment or the Chateau de la Claye near Versailles. Vuillard lived mainly with his mother until her death: he was then sixty.

In 1955, Elizabeth Bishop wrote to Randall Jarrell, thanking him for his review of Poems: North & South—A Cold Spring: he had written that her work was ‘as unmistakable as the first few notes of a Mahler song, the first few patches of a Vuillard interior. (The poems are like Vuillard or Vermeer.)’[1] Bishop wrote that ‘it has been one of my dreams that someday someone would think of Vermeer, without my saying it first, so now I think I can die in a fairly peaceful frame of mind, any old time, having struck the best critic of poetry going that way. . . ’ She continued: ‘Something else rather funny too—I’ve been working on a long poem about an aunt of mine, and when I don’t write on the poem I’ve been trying to use all the same material for either a long story or a short play—and in both of them Vuillard was the person I had in mind for the exact effect I wanted to produce. In fact, in the beginning of the play version I’d already written (in the stage directions) that it was to look like a Vuillard, before I received your clippings. —Well, communication is an undependable but sometimes marvelous thing.’[2]

What more natural, then, in answer to the Librarian’s question as to what I’d like to do on my birthday than say lunch in Bath, followed by the Vuillard exhibition at the Holburne Museum (Édouard Vuillard: The Poetry of the Everyday, until 15 September)? Alas. Ten minutes before we left I stooped a little to put a book back on a shelf and yelled loudly—not from delight or exultation but because I must have twisted my upper body when shelving it, just enough anyway to wreck my—previously wrecked—back again. Instead of looking at paintings by Vuillard, then, I shouted, winced, clutched at walls and door handles, climbed the stairs on all fours and subsequently spent at least ten minutes getting out of bed, cursing and howling, with the aid of the Librarian and a bemused stare from the cat.