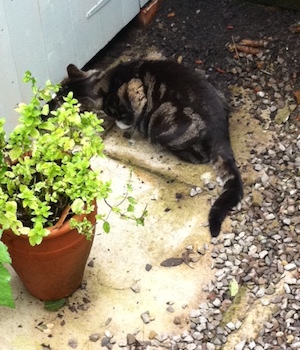 I was thinking again about rats, prompted not only by the current political situation, though that possesses strong indicators, but, in the first instance, by seeing a brown rat—not the endangered black rat—shoot across the garden and, on a later occasion, help itself to seeds on the bird table, having shinned up a long, smooth pole to reach it. I invited the cat to deal with the situation (perhaps you know the story of James Joyce and Ernest Hemingway out on the town in Paris, where the half-blind Joyce would get into fights, be unable to locate his opponent and simply say ‘Deal with him, Hemingway, deal with him!’)—but Harry showed no inclination to do so. It was not a particularly small rat.

The second instance was my nightly reading to the Librarian, not for the first time, Conan Doyle. Devotees of the Sherlock Holmes stories will recall that, in ‘The Adventure of the Sussex Vampire’, Holmes alludes to the giant rat of Sumatra, ‘a story for which the world is not yet prepared.’ Leslie Klinger notes the discovery made by Guy G. Musser and Cameron Newcomb of a species Sundamys infraluteus, weighing in excess of 22 pounds and 24 inches long (including the tail), a discovery reported in a 270-page article in 1983.

Then too there is ‘The Boscombe Valley Mystery’:

‘The Coroner: Did your father make any statement to you before he died?
Witness: He mumbled a few words, but I could only catch some allusion to a rat.
The Coroner: What did you understand by that?
Witness: It conveyed no meaning to me. I thought that he was delirious.’

Later, Watson asks Holmes: ‘What of the rat, then?’ His friend produces a map of the Colony of Victoria (he has wired to Bristol for it the previous night).

Aha! That was Charles McCarthy trying to utter the name of his murderer, John Turner, formerly Black Jack of Ballarat. [1]

Rats are affectionately observed or referenced by Colette—‘I have a little Rat [Colette de Jouvenel, otherwise Bel-Gazou, born 3 July 1913], and I have paid the price: thirty hours without respite, chloroform and forceps’[2]—and Kenneth Grahame, whose The Wind in the Willows appeared in 1908, though his rat was a water-vole. 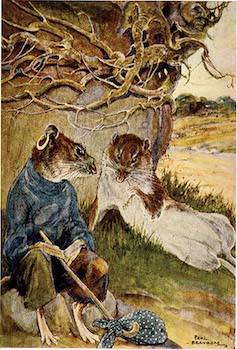 (Paul Bransom, from The Wind in the Willows)

The First World War, specifically life in the trenches on the Western Front, introduced new rat-perspectives, from David Jones:

You can hear the silence of it:
you can hear the rat of no-man’s-land
rut-out intricacies,
weasel-out his patient workings,
scrut, scrut, sscrut,
harrow out-earthly, trowel his cunning paw;
redeem the time of our uncharity, to sap his own amphibious paradise.[3]

and from Isaac Rosenberg, in ‘Break of Day in the Trenches’ (‘Only a live thing leaps my hand,/ A queer sardonic rat’).

Rats—and ferrets—bulked fairly large in Ford Madox Ford’s war too. When a French Minister in wartime Paris asked how he could be of use to Second Lieutenant Hueffer, Ford expressed his desire for some ferrets. ‘First of everything in the world—of everything in the whole world!—comes your battalion. And the ferrets of my battalion had all died suddenly; and the last thing they had said to me had been: Don’t forget to get us some ferrets. If you had seen the rats of Locre you would have understood.’ But, he adds, ‘the Minister had not seen the rats of Locre so he had not understood…. ’[4] Closer to the time of that ministerial incomprehension—‘“Quoi,” he asked. “What is a ferret?”’—the Francophile Ford wrote: ‘There are no ferrets in France, not in the Ministries, not in the Jardin des Plantes et d’Acclimatation. That is perhaps a defect of France, but I have perceived no other.’[5]

Another species of entente cordiale had emerged in the sixteenth century, with John Florio’s translation of the Essays of Michel de Montaigne. Sarah Bakewell writes: ‘But while Montaigne always moved forward, Florio winds back on himself and scrunches his sentences into ever tighter baroque spirals until their meaning disappears in a puff of syntax. The real magic happens when the two writers meet. Montaigne’s earthiness holds Florio’s convolutions in check, while Florio gives Montaigne an Elizabethan English quality, as well as a lot of sheer fun.’ So, ‘Where Montaigne writes, “Our Germans, drowned in wine” (nos Allemans, noyez dans le vin), Florio has “our carowsing tosspot German souldiers, when they are most plunged in their cups, and as drunke as Rats”’. And, wonderfully, ‘A phrase which the modern translator Donald Frame renders calmly as “werewolves, goblins, and chimeras” emerges from Floriation as “Larves, Hobgoblins, Robbin-good-fellowes, and other such Bug-beares and Chimeraes” – a piece of pure Midsummer Night’s Dream.’

And yes, as she goes on to say, Shakespeare did know John Florio, ‘was among the first readers of the Essays translation’ and left strong traces of that reading in several of his plays.[6] Or, if not Montaigne, then rats:

A rotten carcase of a butt, not rigg’d,
Nor tackle, sail, nor mast; the very rats
Instinctively have quit it (The Tempest, I, ii)