(Nicolas Poussin, A Dance to the Music of Time: Wallace Collection)

January, its name derived from Janus, the two-faced Roman god of doors and beginnings. In the Renaissance, his two faces became a symbol of past and future in allegories concerning time.[1] In periods of peace, his temple was closed. In Virgil’s Aeneid:

War has twin matched portals (the name they are known by is ‘War Gates’)
Sacred in cult and in frightening symbols of Mars the Relentless.
Sealed by a hundred barrier bolts made of bronze and eternal
Hardness of iron. And Janus is never off guard at the entrance.

Or, with a seventeenth-century flavour:

Two gates of steel (the name of Mars they bear),
And still are worship’d with religious fear)
Before his temple stand: the dire abode,
And the fear’d issues of the furious god,
Are fenc’d with brazen bolts; without the gates,
The wary guardian Janus doubly waits.

(With a brief pause to admire that neat ‘doubly waits’.)[2]

To Paul Nordoff, 5 January 1946, Sylvia Townsend Warner wrote: ‘No one in wartime can quite escape the illusion that when the war ends things will snap back to where they were and that one will be the same age one was when it began, and able to go on from where one left off. But the temple of Janus has two doors, and the door for war and door for peace are equally marked in plain lettering, No Way Back. And the dead are not more irrevocably dead than the living are irrevocably alive.’[3] 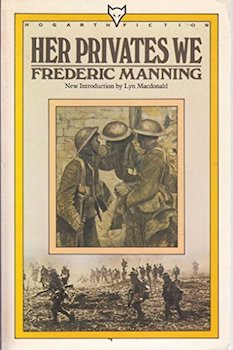 In January 1909, Ezra Pound met Olivia Shakespear, mother of his future wife, Dorothy. He also met Frederic Manning, the Australian poet and prose writer. In the same month in 1930, Manning’s fine novel Her Privates We (as by ‘Private 19022’) was published by Peter Davies. The private edition, anonymous and unexpurgated, had appeared the previous year, as The Middle Parts of Fortune. My 1986 edition, with an introduction by the historian Lyn Macdonald, uses the later title but the earlier, unexpurgated text.

In the Daily Mirror of Wednesday February 26, 1930, it was reported that: ‘Mr Frederic Manning, now revealed as the writer, is the author of two books, “The Vigil of Brunhild” (a narrative poem) and “Eidola”, which are regarded by eminent critics as among the finest contemporary books of verse, a life of Sir William White, and a volume of short stories entitled “Scenes and Portraits”.’ It went on: ‘The latter volume attracted considerable attention at the time of its publication. Colonel Lawrence, author of “Revolt in the Desert”, who was the only person to discern the author correctly from internal evidence, wrote to the publisher: I’ve read “Scenes and Portraits” at least fifty times, and the man who wrote it is the only man who could possibly have written “Her Privates We.”’ 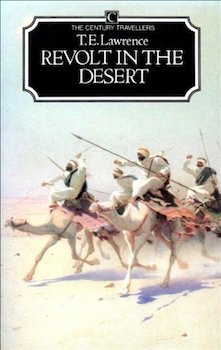 I’m a sometimes enthusiastic re-reader myself (though I’ve read Her Privates We and Scenes and Portraits only once) but – ‘at least fifty times’? A touch of exaggeration there. In February 1930, writing to Charlotte Shaw , Lawrence mentioned seeing J. G. Wilson of Bumpus the booksellers: ‘I said to him “who wrote Her Privates We – that being a superb lovable book, what The Mint ought to have been) – for I know his touch?” He said “I think it begins with M . . . ” and rang up Peter Davies. That let a flood of light in: So to P. D. I said “You haven’t heard of me, my name is Shaw: but perhaps you’ve read a thing called Revolt in the Desert which I published as Lawrence. Did the author of Scenes and Portraits write Her Privates We?” He was flabbergasted, having promised not to give it away.’ He added that Scenes and Portraits ‘has been one of my friends since undergraduate days, so of course Her Privates We is bound to make me happy.’

Later that month, responding to a letter from Manning which asked ‘Was it some uncanny flair, that led you to me; or did Will Rothenstein tell you that he has some letters from me with my regimental number on them, 19022?’, Lawrence wrote: ‘No, it wasn’t Rothenstein’ – ‘As for the authorship of the book—the preface gives it away. It is pure Scenes and Portraits.’[4]

Manning died in February 1935 at the age of fifty-two; Lawrence died just three months later, at the age of forty-six, killed in a motorcycle accident. Manning’s publisher, Peter Davies, took his own life in 1960, at the age of sixty-three. He had won the Military Cross in the First World War, was a cousin of Daphne du Maurier, and founded his publishing house in 1926, with financial help from J. M. Barrie. He was one of the Llewelyn Davies boys befriended by Barrie, who later claimed to have based his character Peter Pan on Peter Davies.

[4] The Letters of T. E. Lawrence, selected and edited by Malcolm Brown, corrected edition (Oxford: Oxford University Press, 1991), 436-437. Pop ‘19022’ into a search engine now—why would you?—and you find a train that runs a little over a thousand miles from Lucknow, in Uttar Pradesh, to Mumbai.