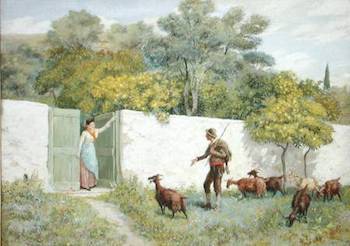 (22 March, birthday of the artist and illustrator Randolph Caldecott: ‘Scene at Montone’, with the shepherd and his sweetheart – ­if she is that – observing the rule of social distancing rather better than some inhabitants of these islands)

That old saying about a week being a long time in politics has been drastically revised; now a day is a long time and single hours are catching up, in part because, increasingly, we pay attention to other parts of the world, countries whose situations have previously tended to slide by under the generous rubric of ‘Elsewhere’.

The only course the Librarian and I can take is to stay at home and, for as long as possible and with all feasible precautions, have a daily walk. But the walks are getting trickier. Fine weather just at the moment, and more people feeling the need for fresh air, unused to spending so much more time than usual indoors. So we are zigzagging. Crisscrossing. Dodging to and fro, as we progress up the long, steep road, cut through the small park, circle the cemetery and come home again. One or two of the paths there are generously wide but most are not. A growing number of people are clearly conscious of the risks and the need to distance themselves but this only makes more obvious the many who are still not, whether distracted or thoughtless or simply irresponsible. Most of those, though, are at least walking near their homes and are to be distinguished from the massed ranks of arrant fools littering roads in the Scottish Highlands and the Lake District and Snowdonia and the Yorkshire Dales, crowding onto beaches and into beauty spots, stuffing themselves into second homes and holiday cottages in areas ill-equipped to deal with the likely fallout of their dangerous idiocy.

At long to medium range, you register the risks: people with young children and with dogs are likely to wander over the pavement without much warning for child- or dog-related reasons, so we give them a wide berth. Pregnant women are already mindful of the dangers so tend to take their own avoiding action. And there are those others, still behaving as though there is no crisis, no pandemic infecting huge swathes of people and killing a lot of them. We were changing to single file and keeping to the edge of the path but all too often the people bearing down on us would either hog the centre of the path or veer about all over it. So now we simply cross the road or dive down side paths or detour abruptly over flowerbeds or old graves. In the cemetery, there are many paths branching off the main road – but other walkers can appear without warning, necessitating an explosive burst of speed. I’m now armed with the useful knowledge that the Librarian can move from 0 to 60 m.p.h. in about four seconds when threatened by a family group bursting out of the trees.

At least we can still go for a walk without needing to produce a document authorising us to do so. That, of course, could change. What’s needed is for common sense to become a bit more common – and quickly.

No one meaning for a text

‘There can be no one meaning for a text. Even that of the writer is but an option.’— Alan Garner, The Voice That Thunders