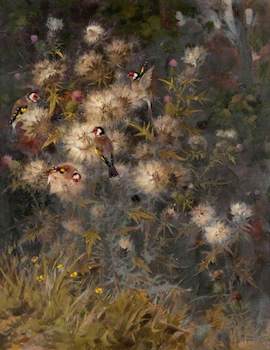 Yesterday, two goldfinches in a tree beside the uphill path through the park. Gulls, pigeons, starlings, sparrows and blackbirds also, singing in a purer air among the hawthorn. ‘Dutch study’, the Librarian murmured once as a cyclist moved along a parallel path, referring to the joint Belgian-Dutch research project which concluded ‘that for walking the distance of people moving in the same direction in 1 line should be at least 4–5 meters, for running and slow biking it should be 10 meters and for hard biking at least 20 meters. Also, when passing someone it is advised to already be in different lane at a considerable distance e.g. 20 meters for biking.’
https://medium.com/@jurgenthoelen/belgian-dutch-study-why-in-times-of-covid-19-you-can-not-walk-run-bike-close-to-each-other-a5df19c77d08 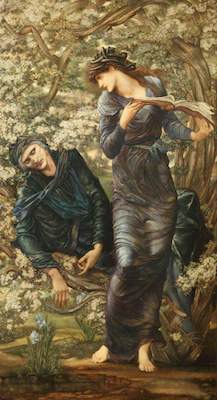 My current social distance is 25 metres, to be on the safe side. Beyond the early morning walk, age and circumstances mean that the only contribution I can realistically make is to stay at home, out of the health professionals’ way, and take no chances. With a small back garden and the wider expanse of the park nearby, I have the luxury of making such choices. Many don’t, as is clearer every day, the fault lines of social and economic inequality—the gaping holes that ten years of austerity, cuts and closures and underfunding, have left in the social structure—painfully apparent. The blunders made by the government in the early stages of its response to the crisis are also increasingly clear.
https://www.newstatesman.com/2020/04/eleven-days-may-have-tragically-cost-uk-fight-against-coronavirus

Today: steady rain. But a parcel arrives, sensibly placed on the doorstep by the postman, who knocks and retreats. My order has arrived from the excellent Handheld Press, started a few years back by the writer and academic Kate MacDonald. Beautifully designed books, superbly packaged and received in two working days from my placing the order: post free too.
https://www.handheldpress.co.uk/ 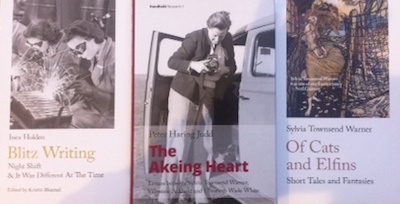 And we go on. ‘Nothing, perhaps, is strange’, Rose Macaulay wrote, ‘once you have accepted life itself, the great strange business which includes all lesser strangenesses.’[1] Jonathan Williams was more proactive: ‘I love to visit The Strange like some people love to visit The Country, as I say over and over again.’[2]

Now The Strange has ferociously visited all of us, is mutating into many forms, some of them mimicking the ordinary, habits of strangeness bedding down, the same people in the park at six in the morning, that couple, that runner with her dog, the spaniel man, the man who picks up rubbish as he tours the perimeter. Some days, some moments, are stranger than others. Every so often, taking what have now become the habitual precautions, washing your hands yet again, wiping down door handles, quarantining envelopes, packages, food wrapped in plastic, you catch your own eye in the mirror and ask what the hell you’re doing and what you’ve become.

Probably more disturbing is the widespread evidence that a great many people not only expect things to ‘go back to how they were before’ but believe that to be a desirable outcome. Are we so lacking in ambition? Are those tens of thousands of lost lives, including many medical and other frontline staff, not worth more than that? Might it not be an opportunity to begin repairing and rebuilding the country? Or do we simply not have any contemporary politicians with the necessary qualities?

‘O God, I could be bounded in a nutshell’, Hamlet says, ‘and count myself a king of infinite space, were it not that I have bad dreams’ (Hamlet, II, ii). 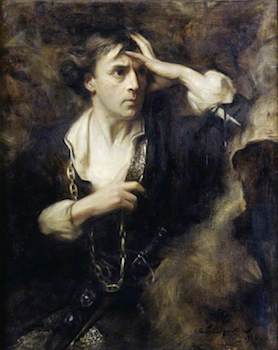 Infinite space is itself a dream just lately – and yes, I’ve been having a few bad ones myself, probably in the company of at least twenty or thirty million other people in this country and who knows how many more worldwide. Tens of millions of bad dreams, not so much nightmares as creeping unease, unsettling encroachments, an impermeable sense of threat, figures in doorways, dark cars waiting where they really shouldn’t be. ‘There is at least one spot in every dream at which it is unplumbable’, Sigmund Freud wrote, ‘a navel, as it were, that is its point of contact with the unknown.’[3] At least one, yes. And all those dreams must add up to a lot of negative energy. Or is the arithmetic quite different? Does it account in part for the immense weariness that seems to be affecting so many people now, even the ones working from home? Or is that down to their online meetings, ten times as tiring as those old face-to-face ones? 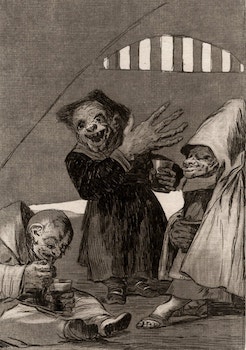 After a visit to an injured colleague, feeling unsettled, Inspector Maigret ‘did not go home, although he lived only 500 metres from there, in Boulevard Richard Lenoir. He began walking, because he needed to walk, needed to feel the indifferent crowd brush against him.’[4]

Yes, that is familiar, less so recently but for years, the desire to be one of a crowd, any crowd, the mass, the many, included, immersed, incorporated and invisible. Less keen these days, unsurprisingly, on crowds and certainly on being brushed against by anyone that I can’t personally vouch for, currently one woman and one cat.