(Jean Rhys by Teresa Chilton via The Independent)

‘I am very astonished that the BBC like my work’, Jean Rhys wrote to Maryvonne Moerman (9 November 1949). It seems, she went on, ‘they thought I was dead – which of course would make a great difference. In fact they were going to follow it up with a broadcast “Quest for Jean Rhys” and I feel rather tactless being still alive!
‘However I’m cheered up too for if they can make a fuss of me dead surely they can make a little fuss though I’m not.’[1]

Rhys had seen an advertisement in the New Statesman a few days earlier, asking anyone who knew of Rhys’s whereabouts to contact Hans Egli – the husband of the actress Selma Vaz Dias, who had adapted Good Morning, Midnight and wanted to make contact with its author.

In his ‘Introduction’ to the 1927 edition of The Good Soldier, Ford Madox Ford wrote: ‘I had in those days an ambition: that was to do for the English novel what in Fort Comme la Mort, Maupassant had done for the French.’[2] Also published that year was The Left Bank, Jean Rhys’s first book, a volume of stories with an introduction by Ford, ‘Rive Gauche’. The affair between Ford and Rhys was over by then: it has been, unsurprisingly, written about at length, by all four participants—Ford, Stella Bowen, Rhys and her husband Jean Lenglet—and by their biographers and critics.[3] In Paris in December 1924, the painter Paul Nash and his wife Margaret bumped into Ford and Rhys at the Gare de Lyons. Nash referred to her as ‘the ghost’, Margaret also thought her ‘ghost-like’. The writer Alexis Lykiard, who knew Rhys late in her life, described her as ‘a truly helpful revenant’.[4]

In her ‘Introduction’ to Rhys’s Collected Short Stories, Diana Athill remarked, noting the title story of Tigers are Better-Looking (1968) as an example, ‘there is more humour in Jean Rhys’s observation of life than is usually recognised’.[5] At the end of ‘The Day They Burned the Books’, one of the stories in that collection, the narrator and Eddie both retrieve one book from the library that Mrs Sawyer is burning: Eddie has Kipling’s Kim but it’s been torn and ‘starts at page twenty now’; while the narrator—who doesn’t at first know what she has because it’s ‘too dark to see’— is ‘very disappointed’ because her book ‘was in French and seemed dull. Fort Comme La Mort, it was called. . . . ’[6] 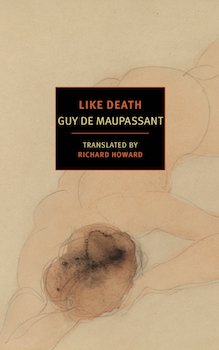 Rhys was very familiar with Maupassant’s work. In 1953, she wrote, in a letter to Morchard Bishop (novelist and biographer: real name Oliver Stoner):

I read a letter in the Observer last Sunday from some editor – Peter Green – promising to accept any story up to (of) the standard of “Boule de Suif”. Well I should damned well think he would! [ . . . ] Poor Boule de Suif. They won’t let her rest –
The thing is I very much doubt whether any story seriously glorifying the prostitute and showing up not one but several British housewives to say nothing of two nuns! – their meannesses and cant and spite – would be accepted by the average editor or any editor.
And “La Maison Tellier”? Well imagine – (Jean Rhys: Letters, 99)

To Selma Vaz Dias, about ‘The Day They Burned the Books’, she commented that it was ‘fairly recent’ and that readers would need to realise that it was about the West Indies ‘a good while ago when the colour bar was more or less rigid. More or less.’ She went on: ‘Also I don’t think I’ve got over what I meant when I called the book “Fort comme la mort” –   (Jean Rhys: Letters, 105)

There’s a nice touch of ambiguity about that phrase ‘got over’: primarily meaning ‘conveyed to the reader’, no doubt, but with a lingering shadow of ‘recovered from’. Jean Rhys never did set down her memories of Ford outside the pages of her fiction, so I like to think of that use of the Maupassant title as something like a wink or a wave from across the street. Although, come to think of it, though the edition of Christina Rossetti’s poems is bound in leather (and the more expensive books are to be sold, not burnt), it goes into the heap to be burnt. Ford always praised Christina as the finest poet of the nineteenth century and wrote about her often.

Jean Rhys’s contribution to the ‘Memories and Impressions’ section of The Presence of Ford Madox Ford comprised just seventy words:

I am writing my autobiography and have tried to say all I know about Ford Madox Ford in that. Of course his great generosity to young writers was very well known both in London and in Paris. He was willing to take a lot of trouble for those he thought of promise.
I learnt a good deal from him and can’t think of anyone who has quite taken his place.[7]

Alas, that autobiography remained unfinished. There were difficulties, her editor Diana Athill observed, since Rhys’s writerly honesty meant that she was reluctant to include dialogue that she couldn’t be sure she remembered exactly; also, ‘that much of her life had been “used up” in the novels.’ So the end of the main text has Rhys showing some of her writing to Mrs Adam, wife of the Times correspondent in Paris, who suggests having it typed and sending it to ‘a man called Ford Madox Ford’.[8]