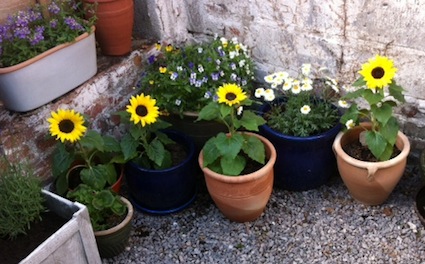 On a day disfigured by news of another mass murder, this time in London, I turn to our new dwarf sunflowers, as the sunflower itself is fabled to turn toward the sun. Helianthus annuus, ‘frequently appearing on rubbish-tips and in unexpected places in gardens, usually from birdseed’, Richard Mabey notes.[1]

‘I am hard at it, painting with the enthusiasm of a Marseillais eating bouillabaisse, which won’t surprise you when you know that what I’m at is the painting of some big sunflowers,’ Vincent van Gogh wrote to his brother Theo.

‘I have three canvases going—1st, three huge flowers in a green vase, with a light background, a size 15 canvas; 2nd, three flowers, one gone to seed, having lost its petals, and one a bud against a royal-blue background, size 25 canvas; 3rd, twelve flowers and buds in a yellow vase (size 30 canvas). The last one is therefore light on light, and I hope it will be the best. Probably I shall not stop at that. Now that I hope to live with Gauguin in a studio of our own, I want to make decorations for the studio. Nothing but big flowers. Next door to your shop, in the restaurant, you know there is a lovely decoration of flowers; I always remember the big sunflowers in the window there.’[2] 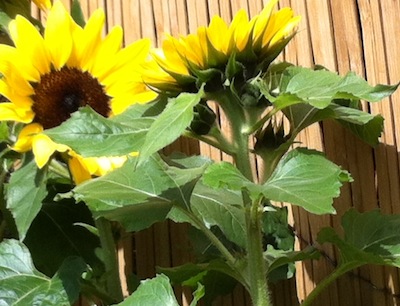 In ‘Morality and the Novel’, D. H. Lawrence writes of ‘the living moment’, of the ‘business’ of art being ‘to reveal the relation between man and his circumambient universe’ at that moment. His first example is this: ‘When van Gogh paints sunflowers, he reveals, or achieves, the vivid relation between himself, as man, and the sunflower, as sunflower, at that quick moment of time. His painting does not represent the sunflower itself. We shall never know what the sunflower itself is. And the camera will visualize the sunflower far more perfectly than van Gogh can.
‘The vision on the canvas is a third thing, utterly intangible and inexplicable, the offspring of the sunflower itself and van Gogh himself. The vision on the canvas is for ever incommensurable with the canvas, or the paint, or van Gogh as a human organism, or the sunflower as a botanical organism. You cannot weigh nor measure nor even describe the vision on the canvas. It exists, to tell the truth, only in the much-debated fourth dimension. In dimensional space it has no existence.
‘It is a revelation of the perfected relation, at a certain moment, between a man and a sunflower.’[3]

Allen Ginsberg’s ‘Sunflower Sutra’ remembers an occasion with Jack Kerouac but looks back to William Blake:

‘Look at the sunflower, he said, there was a dead gray shadow against the sky, big as a man, sitting dry on top of a pile of ancient sawdust—
—I rushed up enchanted—it was my first sunflower, memories of Blake—’[4] 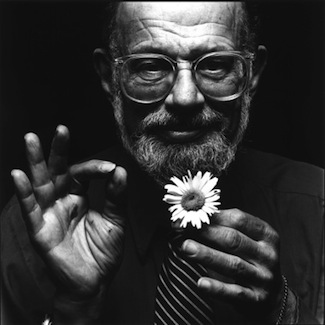 Ah Sun-flower! weary of time,
Who countest the steps of the Sun:
Seeking after that sweet golden clime
Where the travellers journey is done.

Where the Youth pined away with desire,
And the pale Virgin shrouded in snow:
Arise from their graves and aspire,
Where my Sun-flower wishes to go.[5]

Hardly a cheerful poem, to be sure: ‘his terrible lyric on the sunflower’, the flower ‘which wistfully follows the sun across the sky all day, a perfect symbol of the “vegetable” life rooted in this world and longing to be free.’[6] It’s a flower, too, associated strongly with a painter—Vincent—who killed himself at the age of thirty-seven.

Not uncomplicatedly life-affirming, then, but clearly hugely attractive to a great many poets and painters. And forget those, anyway, for the moment, because what strikes me most often is people that say simply: ‘I love sunflowers’ or ‘Aren’t they beautiful?’ Quite basic, no doubt: the shape of a sun, the colour of sunlight. But an immediate, powerful, and genuine response or sense of connection. 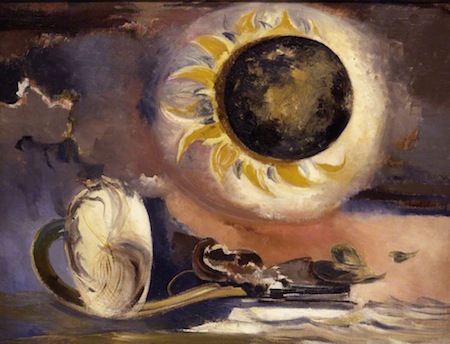 Each morning we devour the unknown.
Each day we find, and take, and spill, or spend, or lose, a sunflower splendor of which none knows the source.[7]