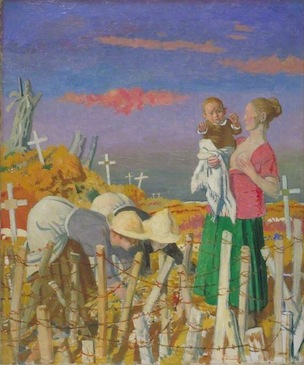 August. High summer, though you’d hardly know it as the rainclouds roll over the house and the showers come and go. The first day of August, in fact. Lammas, hlafmaesse, ‘loaf-mass’. First fruits, harvest. Hurry into your local church with the bread and the wheat.[1] ‘After Lammas corn ripens as much by night as by day.’[2]

The harvest (a word related in origin to ‘autumn’) has been, is still, quite literally a matter of life and death for a great many people. It’s been a rich source for the horror genre too, both on the screen and on the page (Stephen King, Thomas Tryon, The Harvest, Dark Harvest, Blood Harvest, and more, no doubt). And it has its visionary or mystical moments. Poet and playwright Ronald Duncan, a pacifist, ran a co-operative farm in Devon during the Second World War. He recalled of an August day in 1940 that, ‘Binding up these sheaves of oats, I am certain I believe in oats. The stalks falling behind the cutter which we draw behind an old car, the monk binding methodically, the new members binding enthusiastically, women with coloured scarves round their heads are gleaning and one cannot glean ungracefully. If one cannot see God in an oatfield one will never see. For, here is the whole of it.’[3] 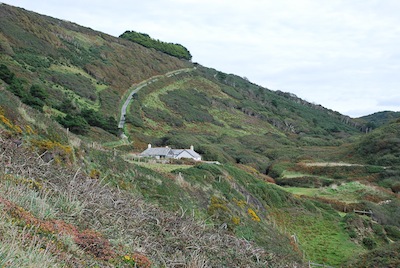 ‘Standing there in the morning happiness,’ T. H. White recalled, ‘with a saffron sky in the east and the moon in the south-west still lemon yellow, beside a field where the harvest had already begun, one saw in the mind’s eye the imaginary lines all over England: the roads coming up macadamized to the invisible threads, and going on as stone, the ditches suddenly changing from cut to uncut, the parishes and territories and neighbours’ landmarks: all slept at peace now, all this beautiful achievement of cooperation and forethought among our fathers who were at peace also, in dust.’[4] 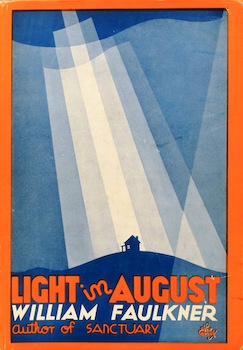 Over the years, William Faulkner’s 1932 novel, Light in August provoked a good deal of discussion over the meaning of its title. Lena Grove is heavily pregnant at the novel’s opening and Faulkner was once asked at the University of Virginia whether his title did indeed refer to a ‘colloquialism for the completion of a pregnancy’. He said no, it was to do with the peculiar quality of light in that month.[5] In his biography of Faulkner, Joseph Blotner tells of the novelist sitting with his wife Estelle in the late afternoon. ‘“Bill,” she said, “does it ever seem to you that the light in August is different from any other time of the year?”’ In this account, Faulkner goes directly to his worktable, crosses out his working title for the novel, ‘Dark House’ and replaces it with ‘Light in August’. It has to be said, though, that Faulkner was largely responsible for the later uncertainty over the ‘meaning’ of his title.[6]

This morning, I noticed a tiny stain on the shoulder of the shirt I wore yesterday: blackberry juice. We’d been wading in among the brambles and nettles for the second time in a few days. Blackberrying is ‘the one almost universal act of foraging to survive in our industrialised island’, Richard Mabey writes.[7] The country in the city, so to speak. We pick them on a path which certainly isn’t hidden. There’s a fair amount of traffic but only by foot and bicycle—there’s no motor traffic nearby which is the main consideration, since we object to being poisoned. Still, it’s odd that quite a few passers-by seem baffled by what we’re doing and hurry their children past. (‘What are they doing, mummy?’ ‘Picking delicious free food, dear, I’ve no idea why.’) Blackberry and apple crumble: even the words taste good. 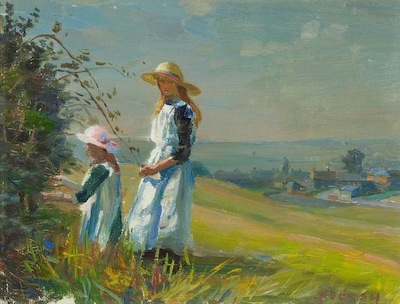 Late August, given heavy rain and sun
For a full week, the blackberries would ripen.
At first, just one, a glossy purple clot
Among others, red, green, hard as a knot.
You ate that first one and its flesh was sweet
Like thickened wine: summer’s blood was in it
Leaving stains upon the tongue and lust for
Picking.

The speaker in Heaney’s poem recalls how quickly the blackberries would rot. ‘Each year I hoped they’d keep, knew they would not.’[8] 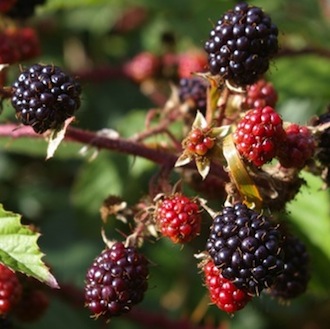 And we have thorn pricks, nettle stings, stained hands. Still—two and a half kilos of blackberries in the freezer. Kilos! What am I saying? That may be a little too foreign for these troubled time. Say five and a half pounds, avoirdupois—but there I go again. . .

I have, though, called to mind a story that Ford Madox Ford told, which seems to me to hint at why some people chose the option that they did in last year’s referendum (and perhaps in more than one election since). Ford was, for a brief time, working on a small farm on the outskirts of Philadelphia. His employer eventually hired another worker, which released Ford from his labours. He was stopping up a wasp’s nest one day, while the hired man was on the roof, fixing the shingles.

The older I get

‘The older I get, the more I seem to live almost wholly in the imagination.’—Guy Davenport to Hugh Kenner, 13 September 1964.