Exactly one hundred years ago, at dawn on 1 April 1918, the poet and painter Isaac Rosenberg was killed by a German raiding party. He was twenty-seven years old. He left behind ‘more than one hundred and fifty poems, four plays, three slight volumes of poems that he had published himself, a handful of prose works, and at least two hundred letters’, Vivien Noakes writes. She adds that, ‘Although he is thought of as a war poet, the greatest part of his output has nothing to do with war; when he left for France in the summer of 1916 he had written 137 of the 158 poems that are known to have survived.’[1]

Rosenberg was born a few hundred yards from where I’m sitting. ‘I spent my wild little pick a back days in Bristol’, he wrote to Ruth Löwy in early 1917. His three Bristol homes—in Adelaide Place, Victoria Square and Harford Street—have all been destroyed but the family lived in the city from his birth in November 1890 to 1897.[2] His boyhood in Stepney and Whitechapel was marked by extreme poverty but, in 1911, a patron named Mrs Herbert Cohen funded his first year at the Slade School of Fine Art. The famous photograph of the 1912 Slade picnic, showing Stanley Spencer, Mark Gertler, Dora Carrington, Barbara Hiles, C. W. R. Nevinson, William Roberts, Edward Wadsworth and David Bomberg, among others, includes Rosenberg, kneeling at the far left of the picture, a little apart from the others, his left forearm resting on his knee and so pointing away from the group, out of the frame. 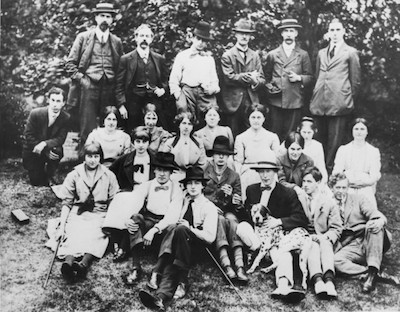 Before the war, Rosenberg was a part of the group that frequented the Whitechapel Library, ‘the university of the ghetto’, a member of the ‘intellectual elite among the Jewish immigrants’, which included Gertler, John Rodker and Bomberg.[3] In 1914, the Whitechapel Art Gallery’s summer exhibition, ‘Twentieth Century Art: A Review of Modern Movements’, showed fifty-four works in the ‘Jewish Section’, selected by Bomberg and including five by Rosenberg.[4]

In early 1914, Rosenberg’s poor health resulted in a trip to South Africa to stay with his sister Minnie, his fare paid by the Jewish Educational Aid Society. By October of the following year, unable to find a job, he enlisted in the army. Sent first to the Bantam Battalion of the 12th Suffolk Regiment, he was transferred, in January 1916, to the 12th South Lancashire Regiment. Reaching France in June 1916, he was soon in the front line and wrote the first of his ‘trench poems’, ‘Break of Day in the Trenches’:

The darkness crumbles away.
It is the same old Druid Time as ever.
Only a live thing leaps my hand,
A queer sardonic rat,
As I pull the parapet’s poppy
To stick behind my ear.

In a letter postmarked 8 February 1917, Rosenberg told Edward Marsh that his commanding officer, after being contacted by Marsh, had had Rosenberg examined ‘but it appears I’m quite fit.’ He went on: ‘This winter is a teaser for me; and being so long without a proper rest I feel as if I need one to recuperate and be put to rights again. However I suppose we’ll stick it, if we don’t, there are still some good poets left who might write me a decent epitaph.’ In January of the following year, he wrote, again to Marsh,‘ You see I appear in excellent health and a doctor will make no distinction between health and strength. I am not strong.’ And he added (these lines, his editor comments, were excised or censored): ‘What is happening to me now is more tragic than the “passion play”. Christ never endured what I endure. It is breaking me completely.’

And it was to Marsh that Rosenberg wrote on 28 March 1918—the letter was postmarked 2 April 1918, a day after the poet’s death: ‘We are now in the trenches again and though I feel very sleepy, I just have a chance to answer your letter so I will while I may.’[5]

A year later, Stanley Spencer wrote to Gwen and Jacques Raverat, ‘I will always feel sorry for Rosenberg; he was never fit for active service. His suffering must have been terrible.’[6] He was, Robert Graves asserted, ‘one of the three poets of importance killed in the war’, along with Wilfred Owen and Charles Sorley.[7] In 1921, Graves mentioned to Edmund Blunden that he had ‘urged’ Sydney Pawling of Heinemann, ‘to publish Rosenberg before anyone else hears about him.’[8] A few people already had: Gordon Bottomley, Laurence Binyon, R. C. Trevelyan and, of course, Edward Marsh. In 1922, Poems by Isaac Rosenberg appeared, edited by Bottomley and with an introductory memoir by Binyon. It ‘passed almost unnoticed.’[9]

There have been several biographies – three in 1975 alone – and Jean Moorcroft Wilson’s second life of the poet was published in 2007. The late Vivien Noakes’ superb edition of Rosenberg’s poems, plays, prose and letters (following the collected editions of 1937 and 1979), appeared in 2008, as did Whitechapel at War: Isaac Rosenberg and His Circle, the catalogue accompanying the impressive exhibition of that title at the Ben Guri Galley. And, of course, Rosenberg crops up in dozens of other biographies, memoirs and art histories. Most recently, he’s warranted a good many mentions and entries on the website, A Century Back, which follows an extensive cast of characters, day by day, through the Great War:
http://www.acenturyback.com/

A few years ago, the Guardian reported on the discovery – or probable identification – of film footage of Rosenberg in the trenches:
http://www.theguardian.com/world/2014/dec/07/war-poet-isaac-rosenberg-film-footage

So much critical and biographical and editorial attention. And yet Rosenberg seems never to have been quite accepted at the War Poets’ top table – Owen, Sassoon, Graves – and is not even always found at the next table in the company of, variously, Brooke, Blunden, maybe Sorley and, more and more often now, Ivor Gurney. He certainly doesn’t seem as widely known, even though ‘Break of Day in the Trenches’ and ‘Returning, we hear the larks’ and, perhaps, ‘Dead Man’s Dump’ are so frequently anthologised. Is he seen as just a little off the main track? And is that because he was also a painter (Wyndham Lewis suffers a little from this, in some contexts, I suspect) – two arts! confusing! – or is it to do with his background, his social class, his Jewishness? Or, most likely, a combination of several or all of these?

He may just be one of those figures that doesn’t fit easily into the dominant narrative: but then the interesting figures often turn out to be precisely those that don’t fit the accepted modernist model (from Gurney to Sylvia Townsend Warner with quite a few in between) and that narrative has, in any case, fragmented into many colliding or overlapping stories.

From her hair’s unfelt gold
My days are twined.
As the moon weaves pale daughters
Her hand may never fold.

Her eyes are hidden pools
Where my soul lies
Glimmering in their waters
Like faint and troubled skies.

Dream pure, her body’s grace,
A streaming light
Scatters delicious fire
Upon my limbs and face.

What in our lives is burnt
In the fire of this?
The heart’s dear granary?
The much we shall miss?

Three lives hath one life–
Iron, honey, gold.
The gold, the honey gone–
Left is the hard and cold.

Iron are our lives
Molten right through our youth.
A burnt space through ripe fields,
A fair mouth’s broken tooth.[10]

There are manuscript versions, letters, notes and other fascinating material on the outstanding First World War Poetry Digital Archive:
http://www.oucs.ox.ac.uk/ww1lit/collections/rosenberg