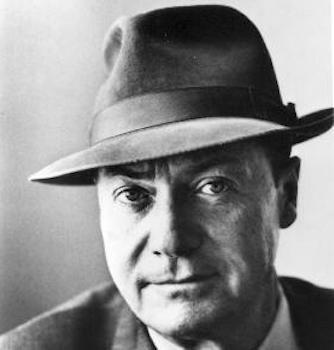 ‘I passed the courthouse on my way downtown. In a cast stone bas-relief above the entrance, a big old Justice with bandaged eyes fumbled at her scales. She needed a seeing-eye man, I told her silently. I was feeling dangerously good.’

Lifting my gaze from Ross Macdonald’s The Goodbye Look, I tried to remember when I’d last felt ‘dangerously good’. As for the world out there – dangerous, if not evidently good – a few ‘seeing-eye’ men and women would certainly come in handy just at the moment. I was hoping that Aldous Huxley might not be right when he wrote in 1946, in Science, Liberty and Peace, ‘The most important lesson of history, it has been said, is that nobody ever learns history’s lessons.’

The title of Macdonald’s novel occurs earlier in the book, when two (male) characters are described as each having a funny look on their faces, as if they were going to die, wanted to kill each other and be killed. ‘I knew that goodbye look,’ Lew Archer says, ‘I had seen it in the war, and too many times since the war.’

Let’s hope that some of the relevant players lose that goodbye look.