‘Oh this wonderful wonderful world, and we who stand in the middle of it are all in a maze.’—Letter to Bernard Barton, 11 April 1844.

In 1922, modernism’s annus mirabilis, Virginia Woolf confided to her diary that she had made up her mind that she was not going to be popular. ‘My only interest as a writer lies, I begin to see, in some queer individuality: not in strength, or passion, or anything startling; but then I say to myself, is not “some queer individuality” precisely the quality I respect? Peacock, for example: Borrow; Donne; Douglas, in Alone, has a touch of it. Who else comes to mind immediately? FitzGerald’s Letters.’ She added that, ‘People with this gift go on sounding long after the melodious vigorous music is banal.’[1]

People of a bookish bent tend to know one or two things about Edward FitzGerald: the most generally known one is that he translated the Rubáiyát of Omar Khayyám; the second thing, also pretty widely known now, is that A. C. Benson’s book about FitzGerald, published in the English Men of Letters series in 1909, which includes the lines, ‘Here he sits, in a dry month, old and blind, being read to by a country boy, longing for rain’, lay behind the famous beginning of T. S. Eliot’s ‘Gerontion’:

Here I am, an old man in a dry month,
Being read to by a boy, waiting for rain.

‘I can recall clearly enough’, Eliot wrote, a decade after The Waste Land, ‘the moment when. at the age of fourteen or so, I happened to pick op a copy of Fitzgerald’s Omar which was lying about, and the almost overwhelming introduction to a new world of feeling which this poem was the occasion of giving me. It was like a sudden conversion; the world appeared anew, painted with bright, delicious and painful colours.’[2]

Most recently, I find a small slip of paper lodged in my old proof copy of W. G. Sebald’s Rings of Saturn, scrawled all over with a couple of dozen one- or two-word notes: names, from literature and history, on which Sebald’s mind has seized until the point is made, the connection or association teased out, the story told. Thomas Browne, Rembrandt, Dunwich, Ashburnham, Michael Hamburger, Middleton, sugar and art, Merton, the Ashburys, Chateaubriand, herrings, silk, the storm of 16 October 1897, Felixstowe, Orfordness – and Edward FitzGerald.[3]

FitzGerald was born on 31 March 1809. On the death of his grandfather in 1818, his mother was reputed to be the wealthiest commoner in England. After grammar school and Cambridge, he eventually furnished a cottage on the edge of the family estate at Boulge Hall in Suffolk. Two years later, after describing a typical day, he could add, with justice, ‘But such as life is, I believe I have got hold of a good end of it.’[4] He married reluctantly – and briefly: less than a year later, he and his wife Lucy concluded that the marriage was a failure and decided to separate. In 1864, FitzGerald moved to Woodbridge. He numbered among his friends, acquaintances and correspondents George Borrow, Thomas Carlyle, the poet George Crabbe’s son (also George), the actress and writer Fanny Kemble, Alfred and Frederick Tennyson, and William Makepeace Thackeray. At Woodbridge, he read, continued to write marvellous letters and visit his circle of friends.

It was in 1856 that one of those friends, E. B. Cowell, had begun transcribing portions of the Ouseley MS of Omar Khayyám’s Rubáiyát, which he’d recently discovered in the Bodleian; in July of that year, he gave FitzGerald the complete transcript. The following year, Cowell, by then in India, sent a transcript of the Calcutta MS of the Rubáiyát. FitzGerald submitted a translation to Fraser’s Magazine but later retrieved it and determined to publish it himself, having two and hundred and fifty copies printed, of which he reserved forty for his own use. It appeared in late March 1859 but failed to sell. It was discovered in the bookseller Bernard Quaritch’s ‘penny-box’ by W. H. Thompson and by Whitley Stokes, a Celtic scholar, who bought other copies and gave one to Dante Gabriel Rossetti. From Rossetti, the circle of appreciation widened, taking in George Meredith, Swinburne, William Morris, Edward Burne-Jones and, through him, his nephew, Rudyard Kipling. Ruskin also read it, quoting a stanza of the poem in a letter to Mrs Simon and remarking, ‘I wish the old Persian could see how much better I write for love of him.’[5] Famously, Ezra Pound would recall, in the context of Burne-Jones and Rossetti that ‘The English Rubaiyat was still-born/ In those days.’[6]

Myself when young did eagerly frequent
Doctor and Saint, and heard great Argument
About it and about: but evermore
Came out by the same Door as in I went. 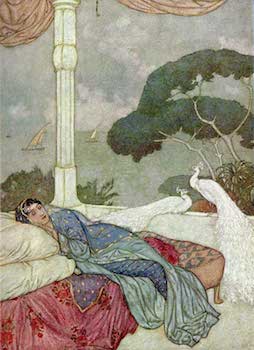 (Edmund Dulac, one of twenty colour illustrations to the Rubáiyát, 1909)

If a loaf of wheaten bread be forthcoming,
A gourd of wine, and a thigh-bone of mutton,
And then if thou and I be sitting in the wilderness—

This is, apparently, a literal translation by Edward Heron-Allen (1899) of the lines that FitzGerald translated as ‘A Jug of Wine, a Loaf of Bread—and Thou/ Beside me singing in the Wilderness—’ (II, 308 n.11). No wonder, then, that Ezra Pound, who had condensed twelve lines of poetry translated from the Chinese by H. A. Giles to a three-line work plus, indispensably, the title (‘Fan-Piece, for her Imperial Lord’), was so receptive to the qualities of FitzGerald’s Rubáiyát.[7]

Ah, fill the Cup: – what boots it to repeat
How Time is slipping underneath our Feet:
Unborn TO-MORROW, and dead YESTERDAY,
Why fret about them if TO-DAY be sweet![8]

To his friend W. F. Pollock, FitzGerald wrote in 1846: ‘I have been all my life apprentice to this heavy business of idleness; and am not yet master of my craft; the Gods are too just to suffer that I should’ (I, 550). Though no stranger to the capital he was rarely at ease there. ‘Though I had to run to London several times, I generally ran back as fast as I could; much preferring the fresh air and the fields to the smoke and ‘“the wilderness of monkeys”’ in London’ (II, 56). FitzGerald was hit hard by the deaths of two close friends, particularly that of Kenworthy Browne who died in a riding accident, crushed by his horse. It was the death of Browne, the editors of his letters remark, ‘that finally made London intolerable to FitzGerald. The two had visited the city together frequently and the memory of his friend so haunted FitzGerald in streets and taverns as to “fling a sad shadow over all”’(I, 4).

Then too, for all his enjoyment of the English countryside, time could hang heavy even in Suffolk. ‘Oh, if you were to hear “Where and oh where is my Soldier Laddie gone” played every three hours in a languid way by the Chimes of Woodbridge Church, wouldn’t you wish to hang yourself? On Sundays we have the “Sicilian Mariners’ Hymn”—very slow indeed. I see, however, by a Handbill in the Grocer’s Shop that a Man is going to lecture on the Gorilla in a few weeks. So there is something to look forward to.’ (II, 411-412). And one of my favourites, in a letter to Mrs Charles Allen in 1857. ‘I always think a Nation with great Estates is like a Man with them:—more trouble than Profit: I would only have a Competence for my country as for myself’ (II, 296). Hurrah for a Competence. 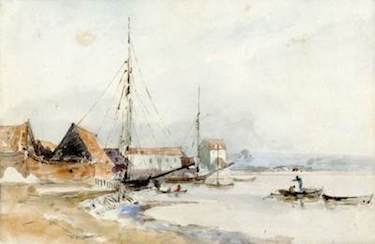 His focus was increasingly on sailing, on his boat, on all things maritime—‘My chief amusement in Life is Boating, on River and Sea’ (II, 400). In August 1875, he wrote to Cowell, ‘I have not been very well all this Summer, and fancy that I begin to “smell the Ground,” as Sailors say of the Ship that slackens speed as the Water shallows under her. I can’t say I have much care for long Life: but still less for long Death: I mean a lingering one’ (III, 592-593).

FitzGerald died on 14 June 1883 and is buried in the churchyard of St Michael & All Angels, Boulge, Suffolk.[9]

[1] Entry for Saturday 18 February: The Diary of Virginia Woolf, Volume 2: 1920-24, edited by Anne Olivier Bell, assisted by Andrew McNeillie (Harmondsworth: Penguin, 1981), 168. A footnote mentions that Norman Douglas’s Alone had appeared in late 1921; and that Woolf possessed the seven volumes of the 1902 Letters and Literary Remains of Edward Fitzgerald

[4] To John Allen, 28 April, 1839. The Letters of Edward FitzGerald, edited by Alfred McKinley Terhune and Annabelle Burdick Terhune, four volumes (Princeton: Princeton University Press, 1980), I, 224. All references in text to this edition.

[8] Quotations from the first edition, the text used in The Penguin Book of Victorian Verse (London: Allen Lane, 1997), selected and edited by Daniel Karlin, who subsequently produced the Oxford World Classics edition of the Rubáiyát (2009).

[9] A visit to the grave by T. F. Powys is the starting-point for a fascinating discussion of the Fitzgerald–Sebald–Powys connection in Stephen Batty’s ‘“To grasp this sorry Scheme of Things”’: Theodore Francis Powys & the Rubáiyát of Omar Khayyám’, The Powys Journal, XXI (2011), 71-95.

2 thoughts on “Edward Fitzgerald: a Life in Letters”