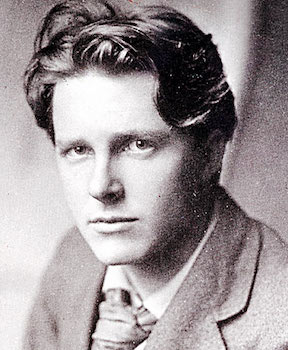 In Jane Gardam’s A Long Way from Verona, Jessica Vye tells Florence Bonne about one of the books given to her by Miss Philemon: it includes ‘some poems by a heavenly-looking man (there’s a photo) called Rupert Brooke, but he only seems to write about fish.’[1] ‘Heaven’ is certainly concerned with fish, as is—unsurprisingly—‘The Fish’ but Jessica probably suffered from the oddities of an anthologist’s choices. That ‘heavenly-looking man’, though, was attested to by many, certainly more than the famously smitten, such as Henry James and Sir Edward Marsh. ‘It was in 1913, I think, and I sitting in the Café Royal feeling amazingly grand, when a young man came in who had a great air of beauty and walked like a panther—and the person I was with said, There’s Rupert Brooke. The only time I set eyes on him. [ . . . ] It was a year when everything was happening [ . . . ] but nothing ever got between me and my impression of the young man walking like a panther.’[2]

On this date in 1915 (a popular anniversary: Shakespeare! Wordsworth! Prokofiev! Lee Miller!) Rupert Brooke died of septicaemia aboard a hospital ship in the Aegean, at the age of twenty-seven, and was buried on Skyros. His legacy often seems to have dwindled to a selection of brooding photographs, a few quotations from besotted admirers, occasional ‘iconoclastic’ versions of the life, pointing out that he wasn’t always as nice as he should have been, and a handful of poems loved by a certain kind of reader and dismissed with a sniff by another kind of reader.

Three years ago, in the Times Literary Supplement (24 April, 2015, 13-15), William Wootten, wrote about Brooke’s afterlives, not least those envisaged by Brooke himself, though generally in terms of dust and scuffed earth rather than heavenly light or adoring readers. He traced a line connecting Brooke’s literary interests with those of T. S. Eliot a few years later. Brooke was deeply read in the work of John Webster (the subject of his dissertation) and other Jacobean dramatists, and recognised immediately the significance of Herbert Grierson’s landmark 1912 edition of Donne’s poems. ‘Had Brooke survived the war,’ Wootten commented, ‘he might well have made the gap between Georgian and Modernist seem far smaller than it has been made to appear.’ Of course, Brooke didn’t survive—but would, I suspect, not have made the case for such writers, often by practical demonstration in original poems, as Eliot did.

In November 1912, Brooke went to Berlin to stay with his Cambridge friend Dudley Ward. A few days later, T. E. Hulme arrived and Brooke met him at the station. They had several conversations about aesthetics, sitting outside the Café des Westens, though the ten days they spent often together didn’t lead to a friendship. In the following year, Hulme was one of the members of the jury that chose Brooke’s ‘The Old Vicarage, Grantchester’ as the best poem to have appeared in The Poetry Review that year, netting Hulme £30.[3] Edward Thomas, though friendly with Brooke and also on the jury, voted for Wilfrid Gibson.[4] The implied place and date of composition—or conception—of the poem, given in parentheses after the title, is ‘Café des Westens, Berlin, May 1912: this was the second of his four trips to Germany that year.

‘[Edward] Marsh gave me a book of English poems [Georgian Poetry]’, Stanley Spencer wrote to his friends, Jacques and Gwen Raverat. ‘I like Rupert Brooke because he knows what teatime is’.[5] ‘Stands the church clock at ten to three? / And is there honey still for tea?’ These are not only two of the best-known lines in British poetry; they are two of the most deceptive, in that they’re often quoted as if comprising almost the entire poem. But that poem contains one hundred and forty lines; and eleven questions precede these two. There is also a lot more humour in the poem than is sometimes allowed for, ‘poor Brooke—he was wittier than I thought’, as Elizabeth Bishop remarked.[6]

I only know that you may lie
Day-long and watch the Cambridge sky,
And, flower-lulled in sleepy grass,
Hear the cool lapse of hours pass,
Until the centuries blend and blur
In Grantchester, in Grantchester. . . .

Before the outbreak of war, Brooke would travel to North America and the Pacific (which produced some of his most interesting work). In 1913, he wrote to Edward Thomas to explain that he hadn’t been able to get down to Hampshire to visit because ‘London gripped me too firmly by the ankle.’ Might Thomas be in the capital the following week? If so, he could charge Brooke with some message for the United States. ‘And I could leave the muses of England in your keeping—I do that anyhow. Feed the brutes. If I don’t see you, farewell.’[7]

On the last day of July 1914, Brooke wrote to Stanley Spencer (‘Dear Cookham’), ‘But this damned war business. . . . If fighting starts, I shall have to enlist, or go as a correspondent. I don’t know. It will be Hell to be in it: and Hell to be out of it.’[8] Brooke was not really a war poet: his five sonnets are essentially the total of his ‘war poetry’. But he saw the effects of war closely enough, in Antwerp, writing to Leonard Bacon on11 November 1914, ‘That was like Hell, a Dantesque Hell, terrible. But there—and later—I saw what was a truer Hell. Hundreds of thousands of refugees, their goods on barrows and hand-carts and perambulators and waggons, moving with infinite slowness out into the night, two unending lines of them, the old men mostly weeping, the women with hard white drawn faces, the children playing or crying or sleeping.’ And, later in the same letter: ‘It’s a great life, fighting, while it lasts, The eyes grows clearer and the heart. But it’s a bloody thing, half the youth of Europe blown through pain to nothingness, in the incessant mechanical slaughter of these modern battles. I can only marvel at human endurance.’[9] 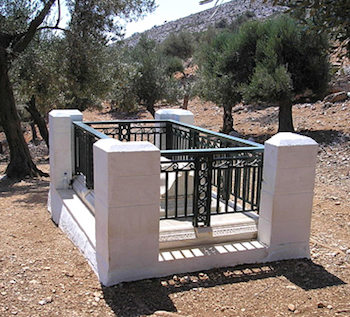 Brooke’s poetic reputation has often struggled to stay alive among ‘serious’ readers, the established image of him and the symbolic burdens he’s been made to bear tending to obscure his writing and the few good poems to be found there. That figure of the naively patriotic, sentimental pastoralist of Edwardian England was not quite him. The narrator of Elizabeth Taylor’s novel writes of Hugo Macmillan, Vesey’s uncle: ‘He had gone on being Rupert Brooke all through the war – a tremendous achievement – and was only now, much later, finding his enthusiasms hardening into prejudices’.[10] The ironic thrust of this (‘all through the war’) is that Brooke’s death was indispensable to his dazzling afterlife, that celebrity in turn often obscuring what was authentic in his work.