A word about Thomas Eakins – not Thomas Atkins, which is a whole other world* – but Thomas Cowperthwait Eakins, painter, sculptor and photographer, born 25 July 1844 (died 1916). A tremendous artist of the realist persuasion, who didn’t always chime with the prevailing tastes or accepted modes of behaviour. His public ‘often resented having unvarnished truth shoved at it, and he entered his forties regarded as truculent and socially inept – at home with his family and his cabal of students, but otherwise unpleasant to know.’[1]

In Artopia, his art diary, the late John Perreault discussed Thomas Eakins and a recent book about him by Henry Adams, Eakins Revealed: The Secret Life of an American Artist (Oxford University Press, 2005). He asserted that Adams was certainly right in taking to task Lloyd Goodrich, one-time director of the Whitney Museum of American Art, ‘for creating the deceptive view of Eakins as manly, honest, and forthright, posing him as virtuously all-American and the dubious precedent for the all-American representational painters Goodrich was promoting then’. In reality, Perreault says, Eakins ‘had a high-pitched voice, affected volunteer fireman’s clothes and often painted in his underwear; failed his classes in Paris, told dirty jokes, was “feminine,” was not exactly fond of women, was never much of an athlete, and drank a quart of milk with every meal.’
https://www.artsjournal.com/artopia/2006/02/eakins_naked.html

Though he had a three-year stint in Paris, which included training at the Ecole des Beaux Arts, Eakins was back in Philadelphia by the end of 1870 and remained in the city thereafter, teaching at the Academy until he was forced to resign in 1886, the purported reason being his removal of a male model’s loincloth in a class which included female students. 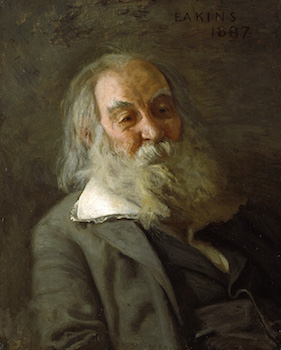 In December 1887, Eakins took the ferry across the Delaware River to Camden and began painting a portrait of Walt Whitman, a few weeks after their first meeting. Eakins had had no significant contact with the Impressionists in France, absorbing rather the lessons of French academicism: his ‘contemporary reputation as a radical lies more in his pedagogy, his use of photograph, and in his interest in the nude, rather than in his approach to portraiture.’[2] Nevertheless, Whitman would prefer Eakins’ interpretation of him above all the many other versions because it depicted him ‘“without feathers”’.[3] ‘I never knew of but one artist, and that’s Tom Eakins, who could resist the temptation to see what they thought ought to be rather than what is.’[4]

As so often, ‘Realism’ is the beginning rather than the end of the matter. Robert Hughes remarks that there are two halves of Eakins the realist: the idea of a painting as ‘a factual and consistent slice of life’ but, ‘rejecting the illusion of Impressionist instantaneity’, he is for ‘memory and combination’, for ‘the tangle of feelings, however far under the surface they may be.’ He bought his first camera in 1880 and saw clearly enough how it could both empirical and romantic, that it could ‘describe fact and suggest fiction’.[5]

Eakins’ most familiar painting is probably The Swimming-Hole, first, The Swimmers: apparently, John Perreault comments, Eakins’ widow tried to shift the title further, to the ‘even more sentimental’ The Old Swimming Hole, and denied that he used photographs – but he did.

Unsurprisingly, the painting recalls Whitman: ‘Where the splash of swimmers and divers cools the warm noon’.[6] And the title recalls too Ezra Pound’s ‘Canto XIII’, the ‘Confucian’ canto, where Kung walks ‘out by the lower river’ with several companions. He asks them what they would do to fulfil their destinies and they speak of government, military administration, religious practices.

And Tian said, with his hand on the strings of his lute
The low sounds continuing
after his hand left the strings,
And the sound went up like smoke, under the leaves,
And he looked after the sound:
”The old swimming hole,
”And the boys flopping off the planks,
”Or sitting in the underbrush playing mandolins.”
And Kung smiled upon all of them equally.
And Thseng-sie desired to know:
”Which had answered correctly?”
And Kung said, “They have all answered correctly,
”That is to say, each in his nature.” 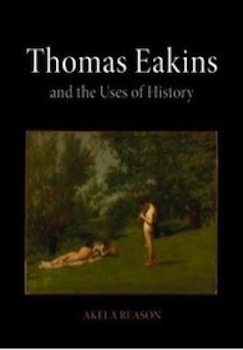 Back in my book trade days, I remember a book by Akela Reason, Thomas Eakins and the Uses of History (Philadelphia: University of Pennsylvania Press, 2010), which drew on unpublished letters, diaries of friends and contemporaries, and period newspapers, and won the SECAC Award for Excellence in Scholarly Research and Publication.

*Popular term for a British infantryman, dating back to at least the mid-eighteenth century, prevalent in the First World War, generally shortened to ‘Tommy’, and used not infrequently by Rudyard Kipling, as in the poem of that name:

[6] Song of Myself, in Walt Whitman: The Complete Poems, edited by Francis Murphy (Harmondsworth: Penguin Books, 1986), 98. This edition has a detail from The Swimming Hole on the jacket.