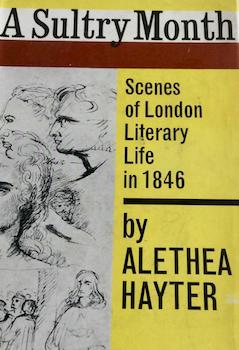 It was ‘the hottest summer month that anyone could remember. For the first twenty-two days of the month the average day temperature was 84° in the shade, 105° in the sun. Kent had had six weeks without rain and midday temperatures of 104° to 116°.’ Alethea Hayter is writing here, in A Sultry Month, about June 1846, though the period covered by her book extends over the first two weeks of July as well.

It was, she adds, ‘murderous weather. Wherrymen, out in boats on the Thames all day, died of sunstroke; farm-labourers died of heat-stroke after a day’s mowing; many people all over the country were drowned while bathing.’ But there were also ‘sudden and violent storms all over the country, many people were killed by lightning, in some places the very air smelt of fire, and the raindrops that fell were the largest ever seen.’[1]

It’s been murderous weather enough in Greece and Japan, to name but two. Still, we tend to look at temperatures with a comparative eye. Only 86°F? In the past few days, I see that Arizona has been running up temperatures of 111° while Basra recorded 45C (113°F). But in 1846 there was no refrigeration; workers’ rights were minimal or non-existent; and in many places the water was quite unfit to drink: a Royal Commission, reporting in 1844 and 1845, inquired among much else into the water-supply of fifty large towns and found that it was good in only six cases.[2]

As for the dangers—no sun cream and no health professionals advising you to slap it on. Half a century after Hayter’s sultry month, Roy Porter notes, the Danish physician Niels Finsen (1860-1904) suggested ‘that ultraviolet rays were bactericidal, and so could be useful against conditions like lupus. Many early hospital radiology departments provided both radiation and ultraviolet light therapy, and Finsen’s researches stimulated high-altitude tuberculosis sanatoria and inspired the unfortunate belief that sun-tans were healthy.’[3]

Sun-tans. Sunbaths. Sun. In his story of that title, D. H. Lawrence writes of a woman and her child sent away to the sun. ‘It was not just taking sunbaths. It was much more than that. Something deep inside her unfolded and relaxed, and she was given.’ Naked by the cypress trees when the husband, in his suit and tie, returns after many weeks. ‘She had always been mistress of herself, aware of what she was doing, and held tense for her own power. Now she felt inside her quite another sort of power, something greater than herself, flowing by itself. Now she was vague, but she had a power beyond herself.’ She becomes intimate with a peasant, seen from a distance—though her next child will be her husband’s.[4]

‘It is strange how different the sun-dried, ancient, southern slopes of the world are, from the northern slopes’, Lawrence wrote in another context. ‘It is as if the god Pan really had his home among these sun-bleached stones and tough, sun-dark trees. And one knows it all in one’s blood, it is pure, sun-dried memory.’[5]

D. H. Lawrence, Frieda and Witter Bynner at Teotihuacan, Mexico, 1923: site of the Pyramid of the Sun

He was not always so positive about the beneficial effects of the sun. Immediately following ‘Sun’ in the Collected Stories is ‘The Woman Who Rode Away’: the sun reaching a certain point in the sky is the moment at which the woman will be sacrificed under the knife of the old priest. ‘The Shadow in the Rose Garden’ has a woman encountering her ex-lover Archie, the rector’s son, now a lunatic after contracting sunstroke during military service in Africa.

Rupert Brooke’s death from blood poisoning in 1915 was first reported as sunstroke. Lawrence attributed this to the sun-god, Phoebus Apollo: ‘He was slain by bright Phoebus shaft – it was in keeping with his general sunniness [ . . . ] Bright Phoebus smote him down. It is all in the saga.’[6]

In Patrick White’s Voss, Laura Trevelyan takes charge of Rose Portion’s baby. Her relationship with the child wonderfully exemplifies Laura’s own complex and courageous character: ‘They were the baby’s days. There was a golden fuzz of morning in the garden. She could not bring herself to tread upon the tender flesh of rose petals that were showered at her feet. To avoid this, she would walk round by another way, though it meant running the gauntlet of the sun. Then her duty was most delicious. She was the living shield, that rejoiced to deflect the most savage blows. Other pains, of desert suns, of letters unwritten, of the touch of his man’s hands, with their queer pronounced finger-joints, would fluctuate, as she carried her baby along the golden tunnels of light.’[7]

Julian Barnes remarks that Fauvism was ‘all about heat’ and that ‘the journey towards analytic and then synthetic cubism also plays out in terms of temperature.’ Fauvism ‘is all pinks and mauves, with shouty blues and hilarious oranges: the sun is ferocious, whatever the sky in the picture may pretend.’ Classical Cubism was suspicious of colour, Braque embracing rich browns, greens, greys. ‘By 1910-11 you could have any colour you liked, so long as it was grey, brown or beige.’[8]

cut apart the heat,
rend it to tatters.

Fruit cannot drop
through this thick air—
fruit cannot fall into heat
that presses up and blunts
the points of pears
and rounds the grapes.

Cut the heat—
plough through it,
turning it on either side
of your path.[9]

But now the cloud is thickening and darkening, and the quickening wind smells of rain, all of this perfectly natural, since I’ve just watered the tomato plants. . .

[3] Roy Porter, The Greatest Benefit to Mankind: A Medical History of Humanity from Antiquity to the Present (London: Harper Collins, 1997), 607.