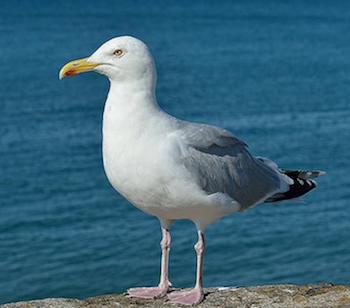 A crisp, cold morning and, walking up through the park, I see two sets each of four magpies but mainly wonder at the unusual number of common gulls, black-headed gulls and herring gulls. I recall, though, a day last year when the Librarian and I saw almost a hundred gulls scattered across the grass on either side of the park. Towards the centre of one large group of them on the left-hand side, a gathering of sparrows; towards the rear and again to one side, two loose groups of wood pigeons. All of them feeding, grazing, pecking, circling. Wet weather, the grass recently cut and still rich green. The upshot: a bad day to be a worm. That note to be scrawled in countless earthy diaries and gardening journals against the date of 16th November: Bad Worm Day.

Yes, we may outnumber the rats by six to one in this country – but there are always the gulls. . . Just a few weeks ago, walking along the front at Lyme Regis, holding tightly shut the box containing fish and chips, I was dive-bombed by a gull, its beak thumping against the lid. At Lyme these days the fish and chips stallholders routinely warn you about the gulls as they hand over your order but I’d naively thought that holding the box closed was a reasonable response to that warning.

Years ago, in my room at the top of an eighteenth-century townhouse in Bath, I would hear the gulls circling and crying outside the window. Later, living in a seaside town where gulls were, unsurprisingly, common, I would be reminded of Bath. Moving again, years later, I would recall the seaside town as a place in which I heard gulls and was reminded of Bath. And so on. On a day when their flight paths seem higher than usual, their calls still sometimes bring back a long ago holiday in Wales, in a cottage set back from the cliff edge above the beach, where gulls would ride the currents of air and be flung high up above the wall at the end of the thin garden, laughing like maniacs.

So immediately and unmistakeably evoking the sea; yet now perhaps even more familiar in urban settings, certainly in parks and on rubbish tips. As a child when I asked about seagulls spotted on pavements or rooftops, I was told: ‘It’s rough at sea.’ That was the assumption: seagulls unable to find food at sea had been driven inland, to try their luck in the cities. Now, of course, there’s so much rubbish in the streets, smeared with sugar and salt and sauces, with chunks of rotting meat and fish, why would they bother to do an honest day’s work out at sea?

Always the gulls. Certainly with the poets, through whose work they wheel and wail endlessly. Jack Bevan’s translations of the Sicilian poet Salvatore Quasimodo, who won the 1959 Nobel Prize for Literature, were published in the Penguin European Poets series in the mid-1960s (my copy’s worn but dourly resilient). Here’s ‘Again I Hear The Sea’

Many nights now I have heard the sound of the sea
once more, lightly rising and falling on smooth beaches.
A voice’s echo shut away in the mind,
rising from time; and, too, this persistent
crying of gulls; perhaps of
tower birds that April
is tempting onto the plains. Once
you, with that voice, were near me;
and I wish now that there could come to you
also an echo memory of me,
like that dark ocean murmur.[1]

There was a period in bookselling when a certain kind of reader would buy a sort of starter pack: this would include Gibran’s The Prophet and Richard Bach’s Jonathan Livingston Seagull. Then, as their reading muscles toughened, they’d move on to Trout Fishing in America and Siddhartha. And then – did they all train to be therapists or did it only seem so? Perhaps only the more disturbed ones.

The poet George Barker published a novel, described somewhere as ‘tortuously symbolic’, called The Dead Seagull, which drew heavily on his relationship with the novelist and poet Elizabeth Smart. A paperback, published by Panther, I believe, with heavier perhaps silk coated paper and line drawings but this could be invention. I lent it to the poet Tony Lopez decades ago and didn’t see it again. That much is not invention. These poets…

He sits, halfway up the stalls
listening to the gulls
resting his eyes

listening to the sea, so sleepy
this damned heat and the flies

And the next thing I say is this:
I saw an eagle once circling against the clouds
over one of our principal churches—
Easter, it was—a beautiful day!
three gulls came from above the river
and crossed slowly seaward!
Oh, I know you have your own hymns, I have heard them—
and because I knew they invoked some great protector
I could not be angry with you, no matter
how much they outraged true music—

You see, it is not necessary for us to leap at each other,
and, as I told you, in the end
the gulls moved seaward very quietly.[3]

John Masefield’s Billy had his own notions about them:

‘Goneys an’ gullies an’ all o’ the birds o’ the sea
They ain’t no birds, not really,’ said Billy the Dane.
‘Not mollies, nor gullies, nor goneys at all,’ said he,
‘But simply the sperrits of mariners livin’ again.’

Phlebas the Phoenician, a fortnight dead,
Forgot the cry of gulls, and the deep sea swell
And the profit and loss.

Eliot wrote a little gloomily to Ezra Pound, who was editing what began as ‘He Do the Police in Different Voices’ and ended as The Waste Land, cutting out long passages of Eliot’s draft, ‘Perhaps better omit Phlebas also???’ Pound replied: ‘I DO advise keeping Phlebas. In fact I more’n advise. Phlebas is an integral part of the poem; the card pack introduces him, the drowned phoen. sailor. And he is needed ABSOlootly where he is. Must stay in.’[5]

Phlebas stayed in, ten lines salvaged from a great many more. And the forgotten gulls stayed in too. Hardly forgotten now, though, neither gulls nor Phlebas.

[5] T. S. Eliot, The Waste Land: a facsimile and transcript of the original drafts including the annotations of Ezra Pound, edited by Valerie Eliot (London: Faber and Faber, 1971), 143, 129.