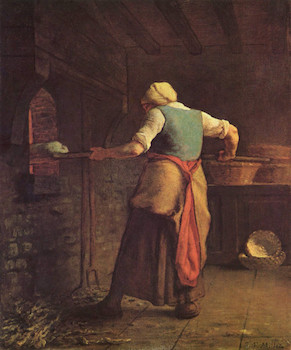 Yesterday, after a night of rain had put paid to the snow and the bird chorus in the park was at full stretch again, I walked uphill in mizzle or, better, dringey—‘the kind of light rain that still manages to get you soaking wet’—which I borrow from the back pages of Melissa Harrison’s splendid Rain: Four Walks in English Weather, even though she indicates that its usage is mainly in Norfolk, Suffolk and Lincolnshire. I should also nod to her ‘Scotch mist’, noted here as ‘the kind of fine rain a Scotsman will barely notice but which will wet an Englishman to the skin (Northamptonshire, Scotland)’.[1]

In fact, there were still sad heaps of snow—or rather, heaps of sad snow—scattered about the slopes, some the remains of snowmen, others less artistic, never being more than heaps, just bigger ones for a while. The rest had melted away more quickly—much more quickly—than a fantasy Brexit.

With that in mind, today I reach for flour and yeast. One small step for man—actually no, not for this particular man. Decades since I made bread but it seems, at this juncture, a handy skill to have. Not that I’m paranoid, you understand—though I recall with fondness the days when certain people were only on the early pages of the How to Fuck your Country Up Handbook, Part One, initial indicative wish list: lorry queues from Dover to Dartford, empty supermarket shelves and bodies strewn along the sides of the roads—and we’ve normally bought bread from a local baker anyway. But making your own is just a very satisfying thing to do. Carpentry would be too – but I have no talent for it and can barely cut paper straight. Mastery of a foreign language would be, yes – but I’ve shown little aptitude for it thus far and it’s a bit late now. I can, though, bake a loaf of bread.

This baking business is no mundane matter. In 1917, there was a Royal Proclamation, a call from the King to his people, to eat less bread, in the face of unrestricted U-boat warfare.[2] A world war later, here was poet and playwright Ronald Duncan, then working on the land and railing against the false division of things into different ‘departments’, singling out the baking of a loaf of bread: ‘Is this an economic action, a spiritual ritual, a biological necessity or a work of art? Is it not obvious that the whole is contained in any part?’[3] I think I’m aiming for the first and last of these, though when you get into the rhythm of kneading, the idea of ritual is a feasible one.

‘Give us this day our daily bread’, I intoned for years as a child before experiencing what was, I suppose, the opposite of what Saul of Tarsus experienced, though also on a dusty road, in my case walking to a summer Sunday service from the school where my father had chosen to board me while he occupied himself with a new job a hundred and fifty miles away—and, concurrently, divorce from my mother.

James Joyce seems to have had a properly elevated view of such things, Stephen Dedalus seeing himself as ‘a priest of eternal imagination, transmuting the daily bread of experience into the radiant body of everliving life.’[4]

I probably won’t aim quite so high – but I do need to advance beyond that two pound loaf tin. I feel it’s cramping my style a little. Today the tin but tomorrow – the baking sheet.