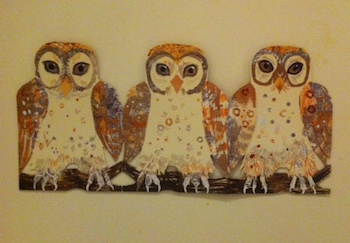 My daughter’s flight from Barcelona, due late in the evening, is delayed by two hours, so I sit up, well beyond my usual bedtime. ‘Night-owl’, people used to say, certainly my mother used to say, of those who kept late hours, though Edward Hopper’s famous 1942 painting of four people in a diner keeping very late hours, ‘the classic film noir Hopper’, as Robert Hughes calls it, is entitled Nighthawks.[1] 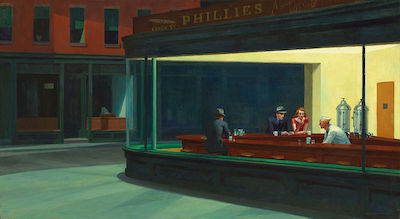 Owls, though, I associate with at least three firsts in my life: in the pages of the brief travel journal I kept on my first trip to Greece some twenty years ago, I see several mentions of the call of the Scops owl, the Eurasian (or Common) Scops owl, known to a generation of young (and older) readers of J. K. Rowling’s Harry Potter books because Ron Weasley’s owl is a Scops. Similar in some ways to a Scops and, apparently, sometimes mistaken for it, is the Little Owl, Athene noctua, sacred owl of Athena. The goddess with the grey eyes, she was traditionally described as. When James Joyce talked to Sylvia Beach of his eye problems and mentioned glaucoma, Beach remembered: ‘It was the first time I had ever heard of this disease, with its beautiful name. “The gray owl eyes of Athena,” said Joyce.’[2] So said the author of Ulysses but, apparently, while Homer uses the word for an ‘owl’ (skops) only once, glaukopis—derived from glaux, the generic term for ‘owl’—occurs some ninety times in his work. It may have meant ‘sharp-eyed’ or ‘with gleaming eyes’.[3] 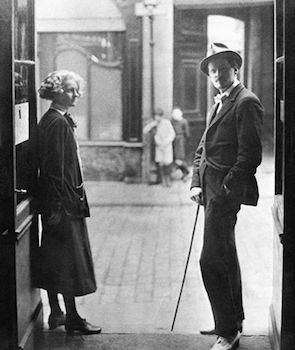 (Sylvia Beach and James Joyce via The Washington Times)

I was working on my thesis when my supervisor, the poet Charles Tomlinson, mentioned in conversation that John Ruskin had discussed the meaning of glaukopis in a book called The Queen of the Air (1869). ‘In her prudence, or sight in darkness, she is “Glaukopis,” owl-eyed’, he wrote of Athena. And a little later, Glaukopis ‘chiefly means grey-eyed: grey standing for a pale or luminous blue; but it only means “owl-eyed” in thought of the roundness and expansion, not from the colour; this breadth and brightness being, again, in their moral sense, typical of the breadth, intensity, and singleness of the sight in prudence’.[4]

I’d been reading Ezra Pound on Allen Upward and the pages to which Charles had directed me evolved into a large part of my first published essay.[5] Upward regarded with a severely critical eye the attempts of scholars thus far ‘to understand the word glaukopis, given to the goddess Athene. Did it mean blue-eyed, or gray-eyed, or—by the aid of Sanskrit—merely glare-eyed? And all the time they had not only the word glaux staring them in the face, as the Athenian name for owl, and the name of ox-eyed Hera to guide them, but they had the owl itself cut at the foot of every statue of Athene, and stamped on every coin of Athens, to tell them that she was the owl-eyed goddess, the lightning that blinks like an owl. For what is characteristic of the owl’s eyes is not that they glare, but that they suddenly leave off glaring, like lighthouses whose light is shut off. We may see the shutter of the lightning in that mask that overhangs Athene’s brow, and hear its click in the word glaukos. And the leafage of the olive, whose writhen trunk bears, as it were, the lightning’s brand, does not glare, but glitters, the pale under face of the leaves alternating with the dark upper face, and so the olive is Athene’s tree, and is called glaukos. Why need we carry owls to Oxford?’[6] (The many owls that were in Athens gave rise to the saying, ‘To bring owls to Athens’, an early forerunner of the English phrase, ‘to take coals to Newcastle’.) 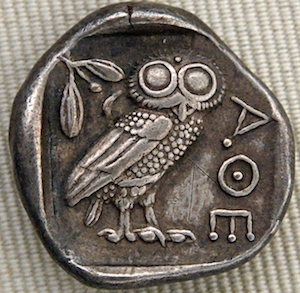 The novelist Violet Hunt, who often received Ezra Pound at South Lodge, her home on Campden Hill Road, had an owl named Ann Veronica, after the novel by H. G. Wells, ‘a very pretty little owl’ but—‘She died untimely.’[7] The owl was part of a menagerie that included a bulldog, nine Persian cats, and several parrots that ‘shrieked “Ezra! Ezra!” whenever they saw him bouncing up the walk.’[8] Hunt’s partner for a decade was, of course, Ford Madox Ford, the other main focus of my research: the rest of my essay linked Upward and his double vortex, or waterspout, with Ford’s 1913 novel The Young Lovell. Ford published almost eighty books in his lifetime but the first of them all was a fairy tale called The Brown Owl, its frontispiece created by his grandfather, the painter Ford Madox Brown. 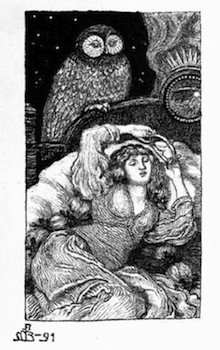 The mountains being so tall
And forcing the town on the river,
The market’s so small
That, with the wet cobbles, dark arches and all,
The owls
(For in dark rainy weather the owls fly out
Well before four), so the owls
In the gloom
Have too little room
And brush by the saint on the fountain
In veering about.[9]

[6] Allen Upward, The New Word: An Open Letter addressed to the Swedish Academy in Stockholm on the meaning of the word IDEALIST (New York: Mitchell Kennerley, 1910), 238.