Today is the birthday of Jonathan Williams (1929-2008), poet, publisher, photographer, essayist, ‘gentleman farmer and amiable grouch’, as Thomas Meyer phrased it—he would have been 90. His last unpublished manuscript, Walks to the Paradise Garden, has just been released by Institute 193, the non-profit arts organisation based in Lexington, Kentucky—yes, Guy Davenport country—which collaborates with artists, musicians, and writers to produce exhibitions, publications, and projects that document the cultural landscape of the modern South. The 240-page book chronicles Williams’ road trips across the Southern United States with photographers Guy Mendes and Roger Manley ‘in search of the most authentic and outlandish artists the South had to offer.’ 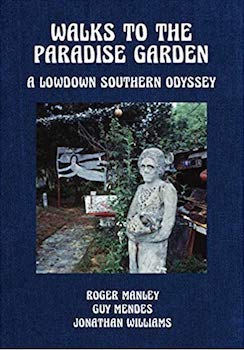 The exhibition associated with the book has just opened: Way Out There: The Art of Southern Backroads at the High Museum of Art in Atlanta, March 2 – May 19, 2019.

A post about Williams last year brought me into contact with the poet Jeffery Beam, co-editor with Richard Owens of Jonathan Williams: The Lord of Orchards, (Wesport: Prospecta Press, 2017).

Here—and why not?—is a Williams poem, ‘An Omen for Stevie Smith’, which caught my eye earlier today.

this is your aunt, Stevie,
and oh you must hurry!

The Man in Black
who waits tonight along the Lyke Wake Walk
has a gown for you
the colour of rowan berries;

a gown borne in air by hornets,
hagworms, and ants, riding
the backs of great bustards and herons. . .

your cats,
Brown and Fry and Hyde,
yes, Stevie, they too
shall come at last
to Whinny-Moor. . .

the five of you
shall dance that heath
to Death!

Stevie Smith has a poem called ‘My Cats’:

I like to toss him up and down
A heavy cat weights half a Crown
With a hey do diddle my cat Brown.

I like to pinch him on the sly
When nobody is passing by
With a hey do diddle my cat Fry.

I like to ruffle up his pride
And watch him skip and turn aside
With a hey do diddle my cat Hyde.

Hey Brown and Fry and Hyde my cats
That sit on tombstones for your mats.

Jeffery Beam has a new book out, which I’ve just begun reading, a collaboration with the Welsh painter Clive Hicks-Jenkins, Spectral Pegasus / Dark Movements: Poems by Jeffery Beam; Paintings by Clive Hicks-Jenkins (Higganum, Connecticut: Kin Press, 2019, ISBN 9780998929316) A limited edition CD of the poems and songs is included with the first 500 copies and available thereafter through Beam’s website: www.jefferybeam.com

Jeffery has a series of readings and launch events coming up, mostly in the United States, but he’ll be at MOMA, the Museum of Modern Art in Machynlleth, Powys, Wales on 15 May 2019.