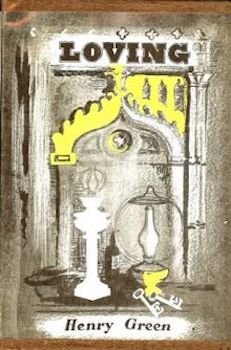 (Henry Green via the TLS; jacket of first edition, Loving)

‘This writer is unique’, Sebastian Faulks remarked. ‘No fiction has ever thrilled me as the great moments in Living and Loving; I have been moved by Tolstoy, Lawrence, Proust and others, perhaps more so, but not in the same way.’[1]

Green – real name Henry Yorke – worked in his family’s engineering firm, after Eton and Oxford, eventually becoming its managing director. His second novel, Living (1929), set in a Birmingham iron foundry, cast a cold eye on the definite article and focused closely on the rhythms of its characters’ speech and behaviour.

‘Lily Gates and Jim Dale, who was Mr Craigan’s young man in iron foundry, stood in queue outside cinema on Friday night. They said nothing to each other. Later they got in and found seats. Light rain had been falling, so when these two acting on screen walked by summer night down leafy lane, hair over ears left wet on his cheek as she leant head, when they on screen stopped and looked at each other. [ . . . ] Later her head was leaning on his shoulder again, like hanging clouds against hills every head in this theatre tumbled without hats against another, leaning everywhere.’[4]

Written during the war, when Green served in the Auxiliary Fire Service, his fifth novel—exactly midway in that sequence of nine, spread over twenty-seven years—was Loving, set in an Irish country house, staffed by English servants, during the Second World War. Those circumstances are conveyed early in the book with great economy, as the old butler lies dying: ‘The pointed windows of Mr Eldon’s room were naked glass with no blinds or curtains. For this was in Eire where there is no blackout.’[5]

‘I got the idea of Loving from a manservant in the Fire Service during the war. He was serving with me in the ranks, and he told me he had once asked the elderly butler who was over him what the old boy most liked in the world. The reply was: “Lying in bed on a summer morning, with the window open, listening to the church bells, eating buttered toast with cunty fingers.” I saw the book in a flash.’[6]

Loving’s central character is Charley Raunce, the footman promoted to butler after Eldon’s demise—or rather, one of the central characters, since the novel concerns in large part the coming together of Raunce and Edith, beautiful and sweet-natured, one of the two under-housemaids, who, when we first encounter her, has ‘stuck a peacock’s feather above her lovely head, in her dark-folded hair’ (19). The Tennants’ two hundred peacocks play a recurring part in this novel, as practical elements in the story as much as in symbolic force. Green’s working-class characters are sometimes untruthful or dishonest or selfish or conniving—fully human, that is to say—but they tend to come off immeasurably better than their social ‘superiors’ who, though of Green’s own class, are often mercilessly anatomised to reveal their shallowness, amorality and hypocrisy. Green denied any socio-political programme in his work: with Living, he said, ‘I just wrote what I heard and saw’. A group of workers at the factory put in a penny each and bought a copy. ‘And as I was going round the iron-foundry one day, a loam-moulder said to me: “I read your book, Henry.” “And did you like it?” I asked, rightly apprehensive. He replied: “I didn’t think much of it, Henry.” Too awful.’

I’ve always been drawn to Green in part because he seems unlike any other writer (though Ivy Compton-Burnett is sometimes cited: the social class of many characters and the dominance of dialogue); and critics seem not to know where to put him, if they put him anywhere. His first novel appeared in 1926, just four years after Ulysses; his second in 1929, the year of The Sound and the Fury—and, though Green said he hadn’t read Ulysses until after he’d completed Living, he did profess great admiration for Faulkner. So, as a novelist, he was a contemporary of Joyce, Ford, Faulkner, Wyndham Lewis, Woolf—but rarely crops up in discussions of ‘modernism’.[7] In the Paris Review interview, Southern commented on the difficulty of tracing Green’s work to sources of influence, noting that V. S. Pritchett had tried to place it ‘in the tradition of Sterne, Carroll, Firbank, and Virginia Woolf’, while Philip Toynbee had gone for ‘Joyce, Thomas Wolfe, and Henry Miller’. When the question of influence was put directly to him, Green answered rather splendidly: ‘I really don’t know. As far as I’m consciously aware I forget everything I read at once including my own stuff.’ (He then admitted to ‘a tremendous admiration for Céline.’)[8]

Here are Edith and her fellow-maidservant Kate, discovered by Charley dancing in the ballroom, in a part of the great house now closed: ‘They were wheeling wheeling in each other’s arms heedless at the far end where they had drawn up one of the white blinds. Above from a rather low ceiling five great chandeliers swept one after the other almost to the waxed parquet floor reflecting in their hundred thousand drops the single sparkle of distant day, again and again red velvet panelled walls, and two girls, minute in purple, dancing multiplied to eternity in these trembling pears of glass’ (65). 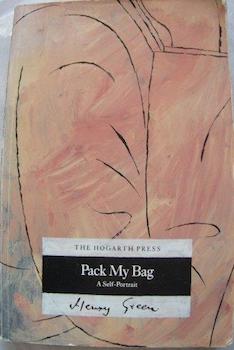 There are many moments of startling beauty and poignancy in Green’s books – and innumerable moments of comedy. There are, too, tiny, distinctive touches such as Raunce’s regular letters to his mother in Peterborough, first written in pencil—as is the envelope—then carefully inked in (and the money order added).

‘Prose is not to be read aloud but to oneself alone at night, and it is not quick as poetry but rather a gathering web of insinuations which go further than names however shared can ever go’, Green wrote in his ‘mid-term autobiography’. ‘Prose should be a long intimacy between strangers with no direct appeal to what both may have known. It should slowly appeal to feelings unexpressed, it should in the end draw tears out of the stone, and feelings are not bounded by the associations common to place names or to persons with whom the reader is unexpectedly familiar.’[9]

‘A long intimacy between strangers’ sounds about right—and pretty characteristic of its author too. A touch enigmatic and paradoxical, with that hint of contradiction which seems to dissolve on closer inspection.

[3] Rachel Cooke, review of The Unpunished Vice: A Life of Reading: https://www.theguardian.com/books/2018/jul/02/the-unpunished-vice-life-reading-edmund-white-review

[6] The interview is reprinted in Surviving: The Uncollected Writings of Henry Green, edited by Matthew Yorke, introduction by John Updike (London: Chatto and Windus, 1992), 234-250. A headnote quotes a letter from Southern: ‘No, there is no real trouble over our interview. There is some vague and preliminary dissension among the staff over the use of the word “cunty”, but nothing concrete.’ A little later, this exchange occurs: INTERVIEWER: And have you ever heard of an actual case of an Irish household being staffed with English servants? MR GREEN: Not that comes quickly to mind, no. (249).