Sitting at the kitchen table with the recent Library of America collection of Joan Didion’s early books, I can hear the Librarian upstairs in vigorous dialogue with the radio. Is it politicians or another helping of vox populi snippets? It’s not easy to say which is more thoroughly depressing these days.

It’s not been a cheering week generally: adding to the university staff strike and the gloom of a general election campaign that’s demeaning to us all came the deaths of Clive James and Jonathan Miller – as one of the contributors to the ‘Letters’ page remarked, ‘just when we’re most in need of an increase in the gross national IQ, we get a drastic reduction.’
https://www.theguardian.com/culture/2019/nov/28/sad-loss-of-clive-james-and-jonathan-miller-modest-witty-intellectual-giants

(Jonathan Miller via The Independent; Clive James via The Financial Times)

On the plus side, not unusually, Guy Davenport – it was his birthday on 23 November (1927-2005); sitting in a rented house on the South coast, I’d just finished re-reading his second collection of essays, Every Force Evolves a Form; and, to complete the trinity, I also read Greg Gerke’s splendid short essay, ‘Davenport as Exemplar’.

Quoting Davenport’s foreword to The Hunter Gracchus and Other Papers on Literature and Art—‘I am not writing for scholars or fellow critics, but for people who like to read, to look at pictures, and to know things’—Gerke writes: ‘I’d always wanted to come at art in a vital Davenportian way, which is to say not with pompous stridency—declaiming for my own notoriety, using Hegel and Derrida as petards to enjoyment—but in a cogent, stylistic manner for the aforementioned “people who like to read.”’ He mentions other critics from whom he has learned—William Gass, Hugh Kenner, Elizabeth Hardwick, Susan Sontag, Cynthia Ozick—and notes that, ‘Though Davenport’s style is not the closest to mine, he is probably the most inimitable, and maybe the most angry’, the three notable forerunners of such literate anger being Blake, Ruskin and Ezra Pound, all of them of central concern to Davenport. Gerke goes on to explore the relationship between the writing self and the ‘superficial’ self, Proust’s ‘self that frequents the world’, a relationship that inhabits, implicitly or explicitly, many of the essays collected in his recent See What I See.*

(* ‘Davenport as Exemplar’ is available here: https://www.essaydaily.org/2019/11/greg-gerke-davenport-as-exemplar.html
See What I See collects thirty-one essays on literature, cinema and the writing life); also recommended is Especially the Bad Things (Gerke’s short fiction). Both have just been published by Birmingham-based Splice: https://www.thisissplice.co.uk/?s=gerke )

A few days ago, it was the birthday of Claude Levi-Strauss—he died in 2009, aged one hundred—whose work I know rather patchily and, frankly, can’t be sure of how much I absorbed from ‘The Champollion of Table Manners’, an essay by Davenport which is by way of being a review of The Origin of Table Manners: Introduction to a Science of Mythology: 3.

Davenport wrote another essay called ‘The Anthropology of Table Manners from Geophagy Onward’, a far more personal take on the subject – within the very definite autobiographical limits that Davenport allows, agreeing with Menander that ‘Talking about oneself [ . . . ] is a feast that starves the guest’ (a reference that Gerke instances in the essay mentioned above). Briefly citing both Davenport essays, Adam Mars-Jones remarked (‘Introversion Has Its Limits’, London Review of Books, 8 March 2018), ‘Shockingly, there is no overlap between them, though cannibalising your own material is generally regarded as anthropophagy at its most respectable.’

‘The Anthropology of Table Manners’ seems saturated with Lévi-Strauss, though it never mentions his name, and The Geography of the Imagination, in which it is collected, preceded Every Force Evolves a Form by several years. The original journal publication of the two essays, though, reverses the volume order, so the reading for the review did indeed underlie ‘The Anthropology of Table Manners’, one of Davenport’s funniest essays (and he can be extremely funny). ‘He is not an easy writer’, he concludes his review. ‘The Elementary Structure of Kinship is one of the most difficult books ever. The Savage Mind is, in its charming way, almost as difficult. The four volumes of the Mythologies require dedication and stamina to read all 2,500 pages. Yet he has never written an uninteresting sentence.’ And when he asserts that Lévi-Strauss ‘is, to my knowledge, the best and most diligent interpreter of our time’, that knowledge very probably incorporated a great deal, if not all, of Lévi-Strauss’s oeuvre. In 1978, he referred, in a letter to Hugh Kenner, to Lévi-Strauss’s Totemism, translated by Davenport’s friend from Merton College, Oxford days, Rodney Needham, and with an introduction by Roger Poole, the Virginia Woolf and Kierkegaard scholar who later wrote on Ford Madox Ford and became a hugely valued member of the Ford community. 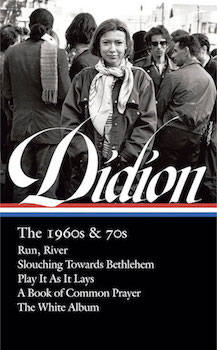 The day moves on from radio to housework, yoga, cooking. Over coffee, I turn to another page of the Joan Didion volume, the opening of her third novel, A Book of Common Prayer: ‘I am an anthropologist who lost faith in her own method, who stopped believing that observable activity defined anthropos. I studied under Kroeber at California and worked with Lévi-Strauss at São Paulo’.

As for what Gerke accurately characterises as Davenport’s ‘very poetic, crisp style—the long pungent sentences are masked by short pugilistic ones’, so many of those sentences stick in the mind, my mind, some consoling, some vertiginously relevant to the present, even if shaped thirty or more years ago.

‘If the past is prologue, it is also a record of grievances to call up and enlist as excuses. All you need is rhetorical talent and a gift for rationalizing.’ Or try: ‘Words are tyrants more powerful than any Caesar. When they are lies, they are devils.’ In one of his most memorable pieces, ‘On Reading’, he writes: ‘We can evince any number of undeniable beliefs—an informed society cannot be enslaved by ideologies and fanaticism, a cooperative pluralistic society must necessarily be conversant with the human record in books of all kinds, and so on—but we will always return to the private and inviolable act of reading as our culture’s way of developing an individual.’ I also pause over ‘Every epoch chooses its own past and cannot know how it will be remembered’; on ‘The uncritical mind is a prey to credulity, and without skepticism there can be no democracy’; and close with ‘Where language has torn the world to pieces, the writer can put it back together.’

More than ever, clearly, the writers have a great deal of work to do.

The older I get

‘The older I get, the more I seem to live almost wholly in the imagination.’—Guy Davenport to Hugh Kenner, 13 September 1964.