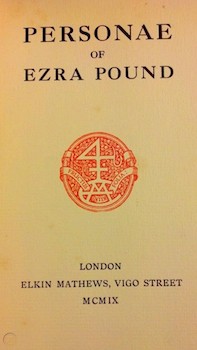 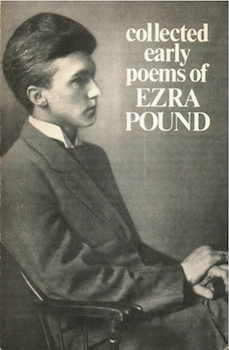 Leafing through Peter Jay’s edition of The Greek Anthology—borrowed from the library, so likely to be with me for a while—its translators ranging from Fleur Adcock and Guy Davenport to Tony Harrison and Peter Whigham, I came across Glaukos – not, a note explains, Glaukos of Athens but Glaukos of Nikopolis (‘perhaps the suburb of Alexandria’). This is translated by Clive Sansom:

No, not earth, nor a stone slab,
But the whole vast surface of the ocean that you see
Is Erasippus’ tomb.
He and his ship drowned together. – Where
And in what unknown depths his bones wander
Seabirds alone can tell.[1]

I like the neat manner in which the close relationship of man and ship is conveyed; and the suggestion that the bones ‘wander’, the voyager never still even in death. Who the seabirds might tell is, of course, a separate question.

In classical literature and mythology, Glaukos or Glaucus crops up several times, including in the Iliad; he is also the son of Sisyphus who ends up being eaten by his own mares, possibly because Aphrodite was in a snit with him. But the best-known is probably the fisherman who ate a magical herb and was transformed into a sea-god. He was later renowned for his prophecies. The story of his doomed love for Scylla is told by Ovid, as is the moment of his ‘sea change’:

I picked some stalks and chewed
What I had picked. The juice, the unknown juice,
Had hardly passed my throat when suddenly
I felt my heart-strings tremble and my soul
Consumed with yearning for that other world.
I could not wait. “Farewell”, I cried, “farewell,
Land never more my home”, and plunged beneath
The waves.[2] 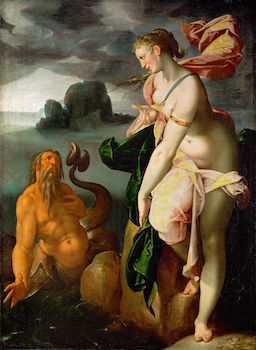 Glaucus is mentioned by Dante – and that mention, from the Paradiso, is the epigraph of Ezra Pound’s ‘An Idyl for Glaucus’, included in his third volume, Personae, published on 16 April 1909.

Pound’s poem is a dramatic monologue, which has ‘invented the lover who witnessed Glaucus’ transformation’, David Moody writes, ‘but does not know how to follow him, and who is left astray in the mortal world in which she can no longer be at home.’[3]

I sought long days amid the cliffs thinking to find
The body-house of him, and then
There at the blue cave-mouth my joy
Grew pain for suddenness, to see him ’live.
Whither he went I may not come, it seems
He is become estranged from all the rest,
And all the sea is now his wonder-house.

She suspects that ‘each time they come/ Up from the sea heart to the realm of air/ They are more far-removèd from the shore’. Once he plucks some grass and bids her eat it before abruptly leaping back into the sea. Then:

I wonder why he mocked me with the grass.
I know not any more how long it is
Since I have dwelt not in my mother’s house.
I know they think me mad, for all night long
I haunt the sea-marge, thinking I may find
Some day the herb he offered unto me.

I am quite tired now. I know the grass
Must grow somewhere along this Thracian coast,
If only he would come some little while and find it me.[4] 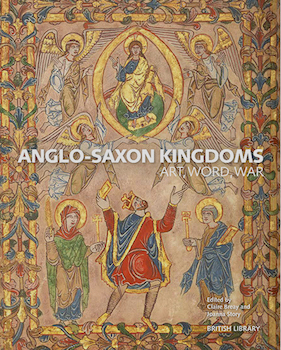 This is still early Pound: there are numberless inversions, archaisms and ‘poeticisms’ but the power and force of some of the work—including ‘An Idyl for Glaucus’—is undeniable. While ‘The Seafarer’ is two and a half years away, Hugh Witemeyer remarks of an earlier poem in the volume, ‘At the Heart O’ Me, A. D. 751’, that it was Pound’s ‘earliest experiment with Anglo-Saxon diction and meter’. Do this poem’s ‘body-house’ and ‘wonder-house’ point in the same direction?[5]

Perhaps. But then Pound read a great deal of Rudyard Kipling’s work and I remember that the opening lines of Kim are: ‘He sat, in defiance of municipal orders, astride the gun Zam-Zammah on her brick platform opposite the old Ajaib-Gher—the Wonder House, as the natives call the Lahore Museum.’ So perhaps not.

The influences tumble over one another in the first years, sometimes fighting like rats in a sack, but he’ll gradually outdistance Pre-Raphaelites, Aesthetes, Symbolists and others—not abandoning or jettisoning them but absorbing them into a stronger and more expansive poetic framework. Dante and Ovid will last the course, though: the experience of the underworld, the reaching for paradise and the lure of transformation.