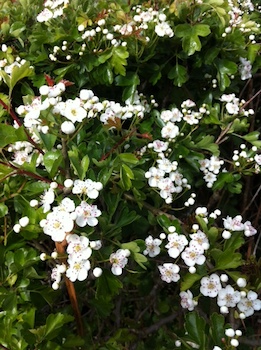 Midway through our week in the Anglo-Welsh border country—wonderful setting, indifferent weather—we take advantage of the fact that we are less than twenty miles from Hay-on-Wye (‘the Book Town of Wales’) where we stayed a couple of years ago and brought home an alarming number of secondhand volumes needing shelf space.

The main event is going back to The Poetry Bookshop. I say ‘back’ but since we were last there, the shop has moved, to a more central position in Hay. The owners, Christopher and Melanie Prince, now stock new titles as well as secondhand. Theirs is the only specialist poetry bookshop in the country. There may be others elsewhere in the world, I don’t know, nor do I feel any need to since the stock here is astonishingly good, ranging from the obscure contemporary to the major classic and modern—I think books by and about William Blake, for instance, take up three shelves. But, not having planned this or prepared for it, I fidget, exhale noisily, pick up and put down a dozen volumes, from George Barker to Alun Lewis, browse the Pound shelves and lapse into staring blankness. Then I remember James Merrill.

A while ago, in the course of an unearthing, I turned up an old stray copy of The Hudson Review, dating back to 1972. It led off with poems by Octavio Paz, included four translations of Osip Mandelstam by W. S. Merwin and Clarence Brown and, the reason for its being in my possession in the first place, a twenty-page essay by Richard Pevear, ‘Notes on the Cantos of Ezra Pound’. I had no clear memory of it—my reading must have coincided with thesis research—but my pencil marks are in evidence: ‘Pound’s poetry has its source in “the noblest of the senses,”, the eyes’, ‘The Greek word for truth, aletheia, means unveiling’, ‘there is nothing fictional, nothing mythological, nothing allegorical in the Cantos’, and the remark that, while Homer makes use of the devices of oral poetry (as have many writers of literary epics since), Pound, ‘on the other hand, makes use of the devices of print, not only in the lay-out of the page, but in his basic technique of the suppression of narrative links, which presupposes a fixed text.’ This looked back, I suspect, to an earlier statement that, ‘There is a feeling of wholeness in the Cantos that is very hard to explain.’ I must have frowned over some of this a good deal at the time but the item that struck me when I brought the journal back into the light of day was Merrill’s ‘Days of 1935—a long poem’. The narrator remembers himself as a child, the news on the radio about the Lindberghs’ kidnapped and murdered baby—Richard Hauptmann’s trial took place in early 1935—and imagining his own kidnapping in a long, detailed narrative:

On the Lindbergh baby’s small
Cold features lay a spell, a swoon.
It seemed entirely plausible
For my turn to come soon,

For a masked and crouching form
Lithe as tiger, light as moth,
To glide towards me, clap a firm
Hand across my mouth,

Then sheer imagination ride
Off with us in its old jalopy,
Trailing bedclothes like a bride
Timorous but happy. 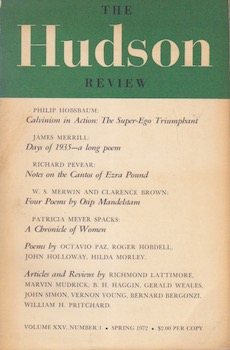 Elegant, accomplished, the form seeming very traditional—regular and capitalised lines, rhymes!—in contrast with most of the stuff I was reading at the time. Then too, the main influences or affinities – Henry James, Proust, even Stevens – were not quite the usual suspects for my favoured poets then either. Reviewing Merrill’s Selected Poems in the New York Times (7 November 2008), August Kleinzahler observed: ‘Many readers will find the poetry mannered. It is, by design. The poet is an aesthete, a dandy in the Baudelairean sense, unabashedly so.’ He added that Merrill ‘enjoys creating the sorts of atmospheres found more often in novels than in poetry, and a number of his poems are narratives in miniature, tiny blank verse novels of manners.’

Your village touched us by not knowing how.
Even as we outdrove its clear stormlight
A shower of self-belittling brilliants fell.
Miles later, hours away, here are rooms full
Of things you would have known: pump organ, hymnal,
Small-as-life desks, old farm tools, charter, deed,
Schoolbooks (Greek Grammar, A Canadian Reader),
Queen Mary in oleograph, a whole wall hung
With women’s black straw hats, some rather smart
—All circa 1915, like the manners
Of the fair, soft-spoken girl who shows us through.
Although till now she hasn’t heard of you
She knows these things you would have known by heart
And we, by knowing you by heart, foreknew. 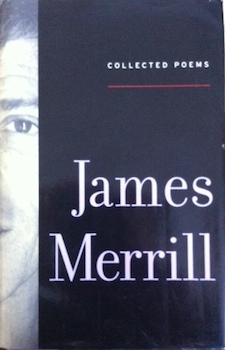 Merrill cropped up several times in the course of other reading: in the letters of Elizabeth Bishop and a biography of her—the lines above are the opening of one of the poems that Merrill wrote to her, the elegiac ‘Overdue Pilgrimage to Nova Scotia’—and in Timothy Materer’s Modernist Alchemy, picked up for the sake of Yeats and Pound but which also pays attention to Merrill because of the famous use of an Ouija board in the making of his enormous poem, The Changing Light at Sandover. And I came across other poems of his, mainly in anthologies, which showed a wide range of styles and forms. So a few relevant facts had lodged in my mind: he’d written a lot, some of it very impressive – and I didn’t have any of his books. Until now.

So, the Librarian having snagged a couple of posters by Jackie Morris—and a few Virago titles in Addyman Books later—I was also pretty restrained, limiting myself to the Peter Russell collection of essays on Pound, read decades ago but not previously owned – and the Merrill Collected Poems, a modest volume of a little under 900 pages. Even so, it still excludes The Changing Light at Sandover. Another time, perhaps. . .