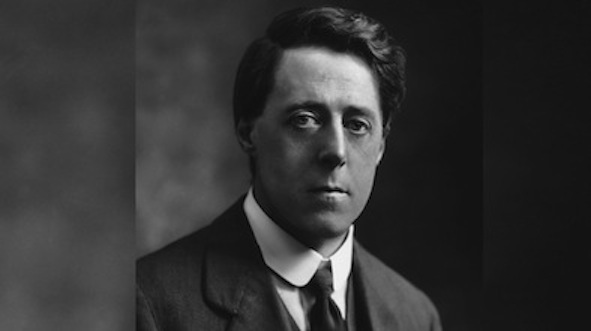 A great many people in the English-speaking world, even if unfamiliar with the name of Laurence Binyon, would probably recognise his words. These words anyway:

They shall grow not old, as we that are left grow old:
Age shall not weary them, nor the years condemn.
At the going down of the sun and in the morning
We will remember them.[1]

The fourth stanza of seven, used in all manner of places on Remembrance Day, formerly Armistice Day—of course, many people still call it that, though the date refers to only one armistice: the signatures on a document in a railway carriage in a clearing in the forest of Compiègne on 11 November 1918.

Binyon was born on 10 August 1869 (he died in 1943). For literary historians and, perhaps, some art historians, the authorship of those famous words might easily be forgotten or set aside as a mere detail in Binyon’s story, interesting in its own right but also connecting with a great many other stories.

One example would be the Abstract & Concrete exhibition (February 1936), which was organised by Nicolete Gray. She was a friend of Myfanwy Evans, who edited a periodical called Axis, devoted to abstract art, from 1935 to 1937, and married John Piper in the latter year. Nicolete was an art scholar and calligrapher, later a friend of David Jones, publishing a book about his paintings  – and the youngest of Laurence Binyon’s daughters: she married Basil Gray, Binyon’s assistant at the British Museum.[2] 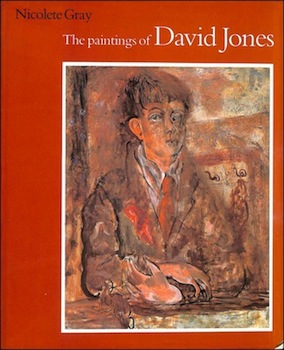 (The jacket illustration is Jones’s 1931 self-portrait entitled Human Being).

Another example would be an encounter in the Vienna – or Wiener – Café:

So it is to Mr Binyon that I owe, initially,
Mr Lewis, Mr P. Wyndham Lewis. His bull-dog, me,
as it were against old Sturge M’s bull-dog, Mr T. Sturge Moore’s
bull-dog[3]

The poet and playwright Thomas Sturge Moore was, in a way, Lewis’s mentor at that stage and, thirty years later, Lewis would write from his self-imposed wartime exile in Toronto: ‘How calm those days were before the epoch of wars and social revolution, when you used to sit on one side of your work-table and I on the other and we would talk’.[4] Thirty years before the Pisan Cantos, Pound wrote in Poetry magazine (June 1915) an appreciation of Sturge Moore in which he referred to the poet as ‘more master of cadence than any of his English contemporaries.’ In the same piece, he wrote a famous line that William Cookson would isolate many years later in his edition of Pound’s Selected Prose: ‘The essential thing in a poet is that he build us his world.’[5] And Pound said that these lines of Sturge Moore’s had stayed with him: ‘Aie, aie, aie!/ Laomedon![6]

At the time of that meeting in the Wiener Café, Binyon was Assistant Keeper at the British Museum. He became, in 1913, Keeper of the new Sub-Department of Oriental Prints and Drawings, with the orientalist Arthur Waley as his assistant. The exhibition Binyon organised of Chinese and Japanese paintings ran throughout 1910-12. His access to, and wide knowledge of, oriental art was hugely influential in the development of modernism. He published over forty books, including more than a dozen volumes of poetry and almost as many on British art and literature, another eight on oriental art, plus plays and biographies.

Pound often referred approvingly to Binyon’s 1911 book, The Flight of the Dragon, on Chinese and Japanese art (one factor in preparing Pound to respond as he did to the gift of Ernest Fenollosa’s notebooks from his widow, Mary, which resulted in Cathay); and he remembered too Binyon’s thirty-page poem Penthesilea (1905), about the queen of the Amazons, her involvement in the Trojan War and her eventual death at the hands of Achilles, whose spear penetrates her shield:

in her side it pierced
And bore her down; imperially she fell
Without a cry, sank on lost feet, nor heard
Achilles’ dread voice, ‘Art thou satisfied,
Penthesilea?’ but the heavy shield
Rang on her fallen, the helmet rolled in dust
From her proud head, and the long, loosened hair
Tossed one tress richly over throat and bosom
Shuddering strongly up from where the blood
Welled dark about the spear forced deep within;
And sudden as a torch plunged in a pool
Her face lay dead-pale with the eyes quite closed.[7]

Much later in life, Binyon produced a translation of Dante’s Divine Comedy in terza rima, which was the version used in the Portable Dante, published by Viking and available from Penguin Books for many years. Pound corresponded with him about his ten-year project and involved himself quite actively in it. In 1934, he published a long, complimentary review, in T. S. Eliot’s Criterion, of Binyon’s version of Inferno. In the course of that review, looking back to his pre-war acquaintance with Binyon at the British Museum, he recalled how he ‘perused, it now seems, in retrospect, for days the tales of . . . demme if I remember anything but a word, one name, Penthesilea, and that not from reading it, but from hearing it spoken by a precocious Binyonian offspring.’[8]

Pound wrote several detailed letters while Binyon was working on the Purgatorio and went through the proofs, commenting to his old teacher William Shepard that Binyon ‘sheds more light on Dante than any translation I have ever seen.’[9]

His attitude to Binyon was often one of ‘baffled exasperation’, as Donald Davie phrases it in some fascinating pages on the relationship between them. Binyon, Davie says, ‘knew the unformulated rules of the society that he moved in, and played the game consistently as the amateur that that society required him to be. It is true to this day in England that, if one has learning, one must wear it so lightly that it is unnoticeable.’[10] (That was 1976. Forty years later—?)

One other thing that Pound remembered was mentioned in a letter of 6 March 1934, when he asked Binyon: ‘I wonder if you are using (in lectures) a statement I remember your making in talk, but not so far as I recall, in print. “Slowness is beauty,” which struck me as very odd in 1908 (when I certainly did not believe it) and has stayed with me ever since’.[12]

It stayed with him for at least another twenty years, until ‘Canto LXXXVII’: ‘BinBin “is beauty”./ “Slowness is beauty.”‘

[6] Richard Sieburth points out that this is the opening to Sturge Moore’s 1903 work, The Rout of the Amazons: Ezra Pound, The Pisan Cantos, edited by Richard Sieburth (New York: New Directions, 2003), 148, note.

[7] Collected Poems of Laurence Binyon (London: Macmillan, 1931), 215. More Amazons! Why just then? The Suffragette group called The Bodyguard was dubbed ‘The Amazons’ by sections of the press, but this was a few years later.