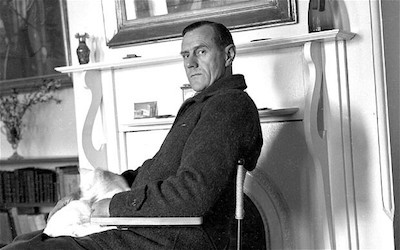 ‘But old Mrs Goodman did die at last.’ That opening sentence—of The Aunt’s Story, by Patrick White (London, 28 May 1912—Sydney, 30 September 1990)—has stayed in my head since I first read it more than thirty years ago. It’s partly the use of the conjunction to open not merely a sentence but a book: a conjunction which, by definition, usually contradicts or qualifies what has come before it. Nothing has come before it here—except the epigraph, taken from Olive Schreiner’s The Story of an African Farm: ‘She thought of the narrowness of the limits within which a human soul may speak and be understood by its nearest of mental kin, of how soon it reaches that solitary land of the individual experience, in which no fellow footfall is ever heard.’[1]

So ‘But’, together with ‘did’ in that first short sentence, looks backward to an existing situation not yet explained; and the epigraph looks forward to what will become an increasingly internal voyage made by Theodora Goodman:

Then, in a gust, Theodora knew that her abstraction also did not fit. She did not fit the houses. Although she had in her practical handbag her destination in writing, she was not sure that paper might not tear. Although she was insured against several acts of violence, there was ultimately no safeguard against the violence of personality. This was less controllable than fire. In the bland corn song, in the theme of days, Theodora Goodman was a discord. Those mouths which attempted her black note rejected it wryly. They glossed over something that had strayed out of some other piece, or slow fire.[2]

The Aunt’s Story was White’s first great novel, following Happy Valley and The Living and the Dead. He won the initial Miles Franklin Award for Voss (and won it again four years later with Riders in the Chariot), declined a knighthood in 1970 and was awarded the Nobel Prize for Literature in 1973 (he didn’t attend the ceremony in Stockholm so the painter Sidney Nolan collected it on his behalf and read White’s acceptance speech). But, even though an unfinished novel, The Hanging Garden, was published in 2012 and a film of The Eye of the Storm released a year earlier (with Geoffrey Rush, Charlotte Rampling and Judy Davis, among others), White seems to have suffered the neglect which often follows the deaths of major artists, coupled with his kind of writing—perhaps seen as that of ‘another dead white male’—apparently going out of fashion.[3]

What was his kind of writing? Modernist, dense, often lyrical, psychologically penetrating, serious (which certainly didn’t exclude an often savage humour), built on the grand scale. The Nobel citation referred to White’s ‘epic and psychological narrative art which has introduced a new continent into literature’. The continent was Australia, which White left, returned to, embraced, rejected, loved and loathed. I read a lot of White’s work many years ago and remember that, at the time, it made a great many other contemporary writers look as though they were just playing at it. These days, the research seems to be the important thing, sometimes more than the actual writing. A lot of people seem to have forgotten what fiction actually is and does. It wasn’t a matter of research with White: it was the immense ambition, the scale of things, the grasp of the elemental, the hard rock at the basis of lives and the extraordinary lengths to which people will go to fulfil or deny their individual destiny. Sometimes his characters staggered under their symbolic weight but even White’s partial failures were more impressive than the majority of contemporary successes. From the pages of his best books, even opened at random, one is often reluctant to stop transcribing:

To what extent is this girl dishonest? he wondered.
Unaccustomed to recognize his own dishonesties, he was rather sensitive to them in others.
It is disgraceful, of course, Laura realized; I have come out here for no convincing reason. She was defenceless. Perhaps even guilty.
‘I try to visualize your life in this house,’ said Voss, facing the honeycomb of windows, in some of which dark figures burrowed for a moment before drowning in the honey-coloured light. ‘Do you count the linen?’
He was truly interested, now that it did seem to affect him in some way not yet accounted for.
‘Do you make pastry? Hem sheets? Or are you reading novels in these rooms, and receiving morning calls from acquaintances, ladies with small waists and affectations?’
‘We indulge in a little of each,’ Laura admitted, ‘but in no event are we insects, Mr Voss.’
‘I have not intended to suggest,’ he laughed. ‘It is my habit of approach.’
‘Is it so difficult then, for a man, to imagine the lives of poor domesticated women? How very extraordinary! Or is it that you are an extraordinary man?’
‘I have not entered into the minds of other men, so that I cannot honestly say with any degree of accuracy.’
But he would keep his private convictions.[4]

White battled constantly with reactionary forces in Australia. Increasingly irascible, with an ever-expanding list of shipwrecked friendships and moving politically further to the left, he campaigned and spoke in public against cowardly or shifty politicians, nuclear weapons and environmental vandalism.

Who could fail to be diverted by White’s rehearsal of testimony as a literary expert at the Melbourne trial of Philip Roth’s Portnoy’s Complaint? White mentioned the charges of pornography laid against Lady Chatterley’s Lover, suggesting that Lawrence’s novel ‘might well be considered pornographic since when I read it I developed a cockstand. Judged by this criterion, Portnoy’s Complaint cannot be considered pornographic since I read it from start to finish without once developing a cockstand.’ The judge then asking, ‘But Mr White – at your age do you think you are capable of manifesting such a physical alteration?’ To which White, ‘beaming around the courtroom’, replies: ‘Shall the court go in camera while we find out?’[5]

‘I went down to Melbourne one day last week for the Portnoy trial’, White wrote to Tom Maschler of Jonathan Cape, who published Roth’s novel as well as many of White’s own, ‘It was an ordeal till I actually got in the box, then the actor in me quite enjoyed the performance. The whole thing has to be conducted with great solemnity, I realise, but I couldn’t resist saying what a funny book I think Portnoy is: I hope I didn’t put my foot in it.’[6]

Thinking about Patrick White, revisiting even the memory of his books, has had a couple of immediate effects: the rapid acquisition of a tidy copy of David Marr’s large volume of White’s Letters—to set beside his fine biography of White; and a troubling determination to add at least half a dozen White titles to my ‘Books to Re-read’ list: certainly The Aunt’s Story, Voss, The Tree of Man, The Eye of the Storm and The Vivisector – about a painter, Hurtle Duffield, one to put beside Joyce Cary’s The Horse’s Mouth (for all the differences); and probably A Fringe of Leaves and The Solid Mandala. Then there’s Riders in the Chariot, The Cockatoos, The Twyborn Affair—a late, remarkable work—and White’s characteristically fierce and candid self-portrait, Flaws in the Glass.[7] Frankly, the list was already looking ridiculous.

There’s a valuable reappraisal of White by the novelist David Malouf, first published in the TLS but probably more generally accessible here:
http://www.theage.com.au/news/books/patrick-white-reappraised/2007/01/26/1169594479079.html?page=fullpage

An appreciation by novelist and biographer Nicholas Shakespeare is here:
https://www.telegraph.co.uk/culture/books/bookreviews/9617484/Patrick-White-Under-the-Skin.html

[1] In fact, Schreiner’s sentence begins with the word ‘Perhaps’, which White omits here. Part Three of The Aunt’s Story uses another epigraph from Schreiner’s novel: ‘When your life is most real, to me you are mad.’

[3] See the edited extract from the recent book on White by Christos Tsiolkas here:

[7] ‘In my own opinion, my three best novels are The Solid Mandala, The Aunt’s Story, and The Twyborn Affair’: Patrick White, Flaws in the Glass: A Self-Portrait (London: Jonathan Cape, 1981), 145.