Do the crows know something that we don’t? Maybe –­ or perhaps we all know the same damned thing.

‘Family customs should not be kept up after they decompose.’—Sylvia Townsend Warner to William Maxwell, 31 December 1975.

Almost there – and yet there’s no great feeling of relief as there often has been in the past when we’re finally shot of a dreadful year. It’s as if, when Philippides arrived at the assembly with news of the Battle of Marathon, he wasn’t even given time to collapse and die but told: ‘Sorry, mate, didn’t we tell you? You have to turn round and run all the way back again now.’

As for the next one, there’s little likelihood of it being any better, a strong chance of it being measurably worse, given the levels of mendacity and cowardice among our leading politicians. I suspect that the recent case of the lucrative ferry contract given to a company that has never run a ferry service and has, in fact, no ships is accurately representative of the levels of intelligence and competence among the governmental ranks.
https://www.theguardian.com/politics/2018/dec/30/no-deal-brexit-ferry-company-owns-no-ships-and-has-never-run-ferry-service

I was reading about Anniversaries by Uwe Johnson, finally translated – by Damion Searls – in its entirety, two volumes totalling 2000 pages.
https://www.theguardian.com/books/2018/dec/30/uwe-johnson-anniversaries-review

The only book by Johnson that I’ve read, forty years ago, is An Absence, which was a novella, short enough, I think, to appear in the small, pocket-sized Cape editions. Anniversaries sounds fascinating but I’ve not yet finished navigating my current two-volume, 2000-page opus, Questioning Minds, Edward Burns’ superb edition of the Kenner-Davenport letters, let alone two or three other colossi, longer-term tenants, combining to crowd Johnson out of my particular landscape. 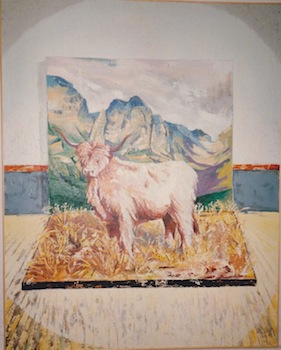 I seem to be constitutionally opposed to the whole idea of New Year resolutions – if it’s really worth doing or changing, you’ll probably do it or change it anyway – but I do entertain reading intentions, probably because I just like making booklists. More poetry for sure, now that I have the books up on shelves and can actually see what we have. The Patrick White and Penelope Fitzgerald re-reads were such a blast that I’ll have a couple more next year: Henry Green definitely; Eudora Welty and Olivia Manning are certainly in the frame; and, of course, I have some Ford Madox Fords to revisit. Then too, some history—a more widespread ability to distinguish history from myth might have saved us all some pain—and particularly local history, this city. Read, walk, ask, listen.

2019’s pleasures, positives and signs of intelligent life will, I think, be firmly located in private, personal spaces. But – always – there just might turn out to be cracks in the wall. O optimist!