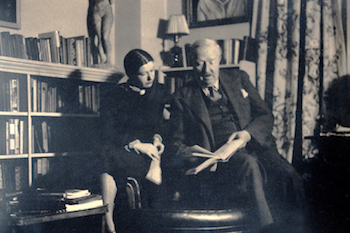 Eighty years ago today, Thursday 25 May 1939, William Carlos Williams, poet and paediatrician of Rutherford, New Jersey, went into New York City to make his farewells to Ford Madox Ford and his partner, the painter Janice Biala. Ezra Pound was also expected to say goodbye but didn’t turn up. Ford and Biala were due to leave on 30 May, aboard the Normandie. Williams ‘knew with his trained medical eye that Ford would soon be dead. Nevertheless, Ford himself, wheezing and overweight, was still optimistic. He was taking a villa on the French coast near Le Havre and invited the Williamses to sail over for the month of August.’

The next day, three and a half thousand miles away, Lawrence Durrell and his wife Nancy, returning to Corfu from England, called in to see Henry Miller in Paris. ‘With a sense of finality, Henry inscribed a copy of Tropic of Capricorn to them with the words, “To Larry and Nancy from Henry – Paris 5/26/39 ‘last few days’”.’

(Nancy Durrell and Lawrence Durrell, family photograph, Joanna Hodgkin, included in Amateurs in Eden: The Story of a Bohemian Marriage, Virago, 2012, via The Guardian)

(Miller’s novel begins: ‘Once you have given up the ghost, everything follows with dead certainty, even in the midst of chaos.’)

Ford fell ill on the voyage to France; he and Biala reached Le Havre on 4 June and moved across the Seine to the port of Honfleur. Three weeks later, on 26 June 1939, Ford died at the age of sixty-five. His death ‘hit Williams hard’, though it was four months before he set down his feelings about Ford in a poem because ‘he deeply mistrusted occasional verse’. Towards the end of October, his poem ‘To Ford Madox Ford in Heaven’ emerged. It was later included in his volume The Wedge (1944) and begins:

Is it any better in Heaven, my friend Ford,
than you found it in Provence?

I don’t think so for you made Provence a
heaven by your praise of it
to give a foretaste of what might be
your joy in the present circumstances.
It was Heaven you were describing there
transubstantiated from its narrowness
to resemble the paths and gardens of a
greater world where you now reside.
But, dear man, you have taken a major
part of it from us.
Provence that you
praised so well will never be the same
Provence to us
now you are gone.

With Europe under threat, Paul Mariani comments, Williams was ‘writing an elegy not only for a man but for a whole world in danger now of disappearing forever.’

Ford’s long poem ‘On Heaven’, written before the First World War, essentially identified that celestial place with his beloved Provence. It became increasingly central to his work in the last decade of his life. In the late work Provence: From Minstrels to the Machine (1935), Ford remarked, ‘If I write of Provence a little as if it were an earthly Paradise the reader must amiably condone what, not being fully in the know, he will consider as a weakness.’

Earthly Paradise was the title that Robert Phelps gave to his skilfully assembled collection of Colette’s autobiographical writings. Colette once observed that, ‘For the hearts which have chosen Provence it takes only July, August, to restore – new, annual unchanging – every astonishment and every bestowal.’ Lawrence Durrell, who spent his last decades, living in Sommières, wrote of catching a glimpse of what Provence must have meant to the ancients: ‘a sort of Tibet-shaped land of paradisiacal luxuriance, remote and at peace’.

In earlier years, it was Greece that had seemed paradisal to Durrell, not least because it represented release from a stifling England—it did to his wife Nancy as well at the outset, though Durrell’s jealousy and controlling behaviour led to their separation during the Second World War, after they had been forced to flee Greece. For Henry Miller too, his first experience of Greece tasted of heaven in the face of encroaching catastrophe. A few months before the outbreak of war, he went to the Dordogne region: ‘It is the nearest thing to Paradise this side of Greece.’ Arriving at Piraeus in a heat wave in July 1939, he joined Durrell and spent time on Corfu, in Athens and travelling in the Peloponnese. He would later state simply that, ‘Greece is now, bare and lean as a wolf though she be, the only Paradise in Europe.’

The ‘last few days’. But the noises of war were increasingly difficult to ignore. The American Embassy was keen to get its nationals home safely and Miller returned to the United States.

A few years later, in a detention camp a little to the north of Pisa, Ezra Pound wrote:

Joanna Hodgkin, Amateurs in Eden: The Story of a Bohemian Marriage (London: Virago, 2012).