Given that it’s Walt Whitman’s two hundredth birthday, I meant to write about that ‘good gray poet’; but then, hundreds if not thousands of people will be commenting on Whitman, stressing his concentration on democracy and America, even quoting a bit of his poetry; and, in any case, I’ve been distracted today by the machinations and opaque absurdities of banks – and also by the important business of settling in Harry,  a recent addition to the household. 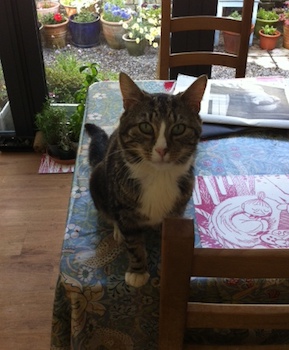 Quick, quick, said the bird. Here’s a bit of poetry:

Warble me now for joy of lilac-time, (returning in reminiscence,)
Sort me O tongue and lips for Nature’s sake, souvenirs of earliest
summer,
Gather the welcome signs, (as children with pebbles or stringing
shells,)
Put in April and May, the hylas croaking in the ponds, the elastic
air,
Bees, butterflies, the sparrow with its simple notes,Blue-bird and darting swallow, nor forget the high-hole flashing his golden wings[1]

I was thinking, anyway, of James Augustine Aloysius Joyce and Franz Kafka. On 2 February 1926, Sylvia Beach, proprietor of the Shakespeare & Company bookshop and first publisher of James Joyce’s Ulysses, held a party for the fourth birthday of the novel (and its author’s own forty-fourth birthday). Both she and Joyce wore eye patches for the occasion. Joyce suffered consistently from eye problems for many years; Sylvia, more specifically, was suffering an obstruction of the lacrimal ducts, having strained her eyes while working, with Adrienne Monnier, on a translation of Walt Whitman’s unpublished speech, ‘The Eighteenth Presidency’. Sylvia, a member of the newly formed Walt Whitman Committee of Paris, had suggested a Whitman exhibition at the bookshop, with manuscripts, photographs and early editions. At the Ulysses party, Joyce had quoted some Whitman. Now he announced: ‘I am going to Stratford-on-Odéon’, before attending the opening of the Whitman exhibit, to a private audience, on 20 April 1926.[2]

Sylvia’s Aunt Agnes had once visited Whitman in Camden, where manuscripts, letters and much else was strewn all over the floor.[3] Her aunt was with a friend, Alys Smith, who later married Bertrand Russell. ‘Whitman was anything but the style’, Sylvia wrote later. ‘“The Crowd” couldn’t put up with him, especially after T. S. Eliot aired his views about Walt. Only Joyce and the French and I were still old-fashioned enough to get along with Whitman. I could see with half an eye Whitman’s influence on Joyce’s work – hadn’t he recited some lines to me one day?’[4]

(Franz Kafka via The Guardian)

As is often noticed, ‘old Whiteman self’ turns up in both Finnegans Wake and—‘Do I contradict myself? Very well then, I contradict myself’—Ulysses.[5] If Mr Eliot was unconvinced, and Messrs Pound and Lawrence conflicted, there were, quite apart from the French and Mr Joyce, admirers everywhere. In Prague, Franz Kafka gave a copy of the German translation of Leaves of Grass to his young friend, Gustav Janouch, praising Whitman as one of ‘the greatest formal innovators in the modern lyric.’ He went on: ‘The formal element in Walt Whitman’s poetry found an enormous echo throughout the world. Yet Walt Whitman’s significance lies elsewhere. He combined the contemplation of nature and of civilization, which are apparently entirely contradictory, into a single intoxicating vision of life, because he always had sight of the transitoriness of all phenomena. He said: “Living is the little that is left over from dying.” So he gave his whole heart to every leaf of grass.’[6]

Four years after the Whitman exhibition, another American arrived in Paris, who was also an enthusiast. Henry Miller would later write: ‘For me Walt Whitman is a hundred, a thousand, times more America than America itself’; and, of Dostoievsky and Whitman: ‘for me they represent the peaks in modern literature.’ To the photographer Brassaï, Miller remarked: ‘You know that one of my gods is Walt Whitman. The cosmological scope of his vision no doubt owes a great deal to the “vastness” of the American continent. Whitman was dreaming of a new race on the scale of that land, an earthly paradise. Despite everything about American life that’s been spoiled, that potentiality still exists. I’m convinced of it.’[7]

Paul Zweig registered the noticeable trait among leading modern poets of bringing ‘the unpoetic’ into poetry, pointing to Pound, Rilke, Eliot and Williams: ‘But in this area, Whitman is the master. Apparently there was nothing he could not use: his personal knowledge of house building, Italian opera, Olmsted’s lessons on astronomy, the world atlas.’[8]

Master Whitman posed a problem for many poets, especially American poets. How to avoid and evade the legacy of ‘the great American poet’? Interestingly, in an essay on Wallace Stevens, Hugh Kenner observed that: ‘Nonsense freed both Eliot and Stevens from a poet they longed to be freed from: Whitman. It permitted an American to manipulate the rituals of certified Poetry (the resonant turn of phrase, the mighty line) without sounding the way Whitman had made Tennyson sound, provincial. Whitman’s was no longer the only way around an Anglophile provincialism.’[9]

In a 2008 lecture, the poet Michael Longley said that, throughout fifty years of writing, ‘when the creative buzz comes on, I have felt sizeable, capacious like Walt Whitman; but when I’ve written the poem and typed it out I realise that I am still Emily Dickinson – the pernickety Emily who, when asked for her opinion of Leaves of Grass, said of Whitman, “I never read his book ­ but was told that he was disgraceful.”’

Longley went on to say that he had worshipped Emily Dickinson since his university days. He had read Whitman ‘of course’ but ‘the penny has only recently dropped. How could I have managed without him for so long?’[10]

Well, yes. How could anybody?

A line in long array where they wind betwixt green islands,
They take a serpentine course, their arms flash in the sun—hark
to the musical clank,
Behold the silvery river, in it the splashing horses loitering stop to
drink,
Behold the brown-faced men, each group, each person a picture,
the negligent rest on the saddles,
Some emerge on the opposite bank, others are just entering the
ford—while,
Scarlet and blue and snowy white,
The guidon flags flutter gayly in the wind.

‘Whitman’s excitement carries weight because he realized that a man cannot use words so unless he has experienced the facts that they express, unless he has grasped them with his senses.’[11]