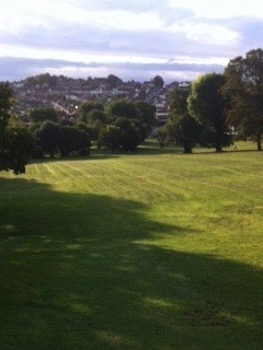 Not far into Edith Wharton’s The Spark, one of the novellas in her 1924 volume, Old New York, I came across the young narrator’s query to Jack Alstrop about what Harvey Delane, a figure of great interest to him, has done in his life: ‘Alstrop was forty, or thereabouts, and by a good many years better able than I to cast a backward glance over the problem.’[1]

I was reading Old New York just then because of a hint from Guy Davenport (this story, ‘about a man who had known Whitman in the war’), and my attention had snagged on that phrase ‘backward glance’.[2]

In 1962, Allen Tate published an article responding to a new book of poems, The Long Street, by his friend of long standing, Donald Davidson. Its title was ‘The Gaze Past, The Glance Present: Forty Years After The Fugitive’. This last was the influential journal, published in the early twenties, which centred on poets and scholars at Vanderbilt University in Tennessee. Several of those writers associated with it (Davidson, Tate, Robert Penn Warren) were later part of the group called the Agrarians. 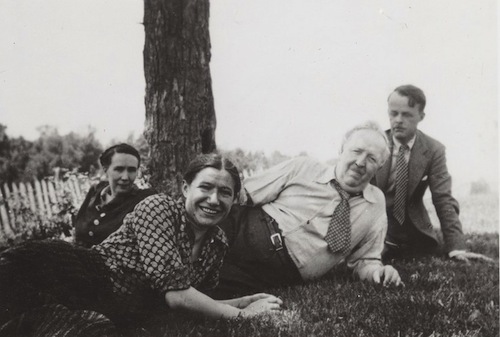 Tate’s title indicated what he regarded as the disproportionate extent of Davidson’s steady backward gazing, his ‘opposition of an heroic myth to the secularization of man in our age’ – though Tate himself tended to see the fall of the South very much in mythic terms.[3]

Nearly twenty years earlier, another piece by Tate, ‘The New Provincialism’, had asserted that, ‘With the war of 1914-1918, the South re-entered the world—but gave a backward glance as it stepped over the border: that backward glance gave us the Southern renascence, a literature conscious of the past in the present.’[4]

That phrase in turn perhaps looked back a decade to Edith Wharton’s 1934 autobiography, A Backward Glance, which itself looked back to Walt Whitman. ‘A Backward Glance O’er Travel’d Roads’ appeared in 1888 as a preface to November Boughs and was incorporated into the collected volume, Leaves of Grass, in the following year. 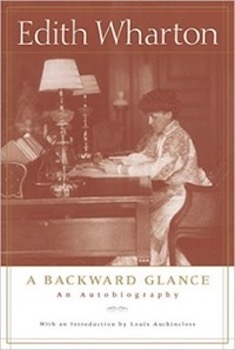 Remembering an occasion on which someone had spoken of Whitman in the company of Henry James and herself, Wharton recounts how it was ‘a joy to discover that James thought him, as I did, the greatest of American poets. “Leaves of Grass” was put into his hands, and all that evening we sat rapt while he wandered from “The Song of Myself” to “When lilacs last in the door-yard bloomed” (when he read “lovely and soothing Death” his voice filled the hushed room like an organ adagio), and thence let himself be lured on to the mysterious music of “Out of the Cradle”, reading, or rather crooning it in a mood of subdued ecstasy till the fivefold invocation to Death rolled out like the knocks in the opening bars of the Fifth Symphony.’[5] 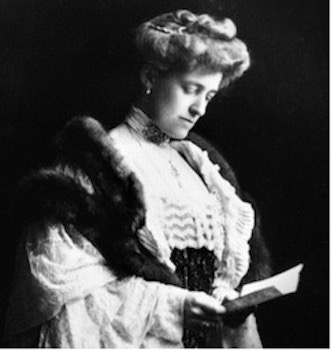 (Edith Wharton via the BBC)

Whitman would die four years after his 1888 essay. ‘So here I sit gossiping in the early candlelight of old age—I and my book—casting backward glances over our travel’d roads.’ The roads are those to and through and from his great book, the difficulties of publication, the financial failure of his work, the critical attacks that have been made upon it. Yet the glance is just that: as so often, Whitman’s gaze is, in fact, to the future. ‘I look upon Leaves of Grass, now finish’d to the end of its opportunities and powers, as my definitive carte visite to the coming generations of the New World, if I may assume to say so.’[6] 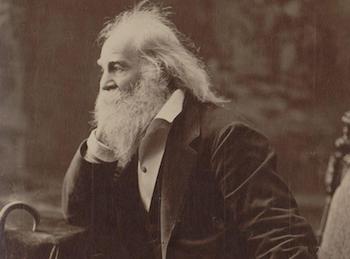 As the White Queen remarks in Through the Looking-Glass, ‘“It’s a poor sort of memory that only works backwards”.’[8] 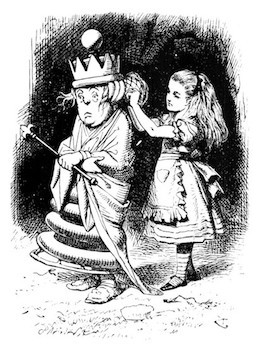 (Alice and the White Queen by John Tenniel)

People have occasionally remarked in my hearing that there’s ‘no use in looking back’, that they ‘live in the moment, always in the present tense’. Well, that’s just dandy, they might see a tail or a trunk but they won’t be seeing the whole elephant any time soon. The backward glance is indispensable, I think, as resource, as collaborator, as partner; though best not, perhaps, as master. It’s all in the proportions. Francis Bacon observed that ‘There is no excellent beauty that hath not some strangeness in its proportion.’[9] There are, though, strangenesses that appear to have little or no acquaintanceship with beauty.

It has been, in any case, a remarkable few years for backward glances and gazes, and for fixed, demented backward—and forward—stares too. ‘Those who cannot remember the past are condemned to repeat it,’ George Santayana wrote, this famous aphorism inscribed on a plaque at Auschwitz.[10] In that context, of course, it’s very clear what past is being alluded to and the way in which it is and should be viewed. Elsewhere, though, pasts have a great many questions to answer and are subject to warring interpretations. Some of these are unambiguously wrong but others will continue to brawl like rats in a sack. We can only wait with keen interest, if not a great deal of optimism, to see what is glimpsed and held from now in some future backward glance.

[1] Edith Wharton, The Spark, in Novellas and Other Writings, edited by Cynthia Griffin Wolff (New York: Library of America, 1990),451.

[2] Guy Davenport, ‘Walt Whitman and Ronald Johnson’, The Hunter Gracchus and Other Papers on Literature and Art (Washington: Counterpoint, 1996), 250.

[5] Wharton, A Backward Glance in Novellas and Other Writings, 923.