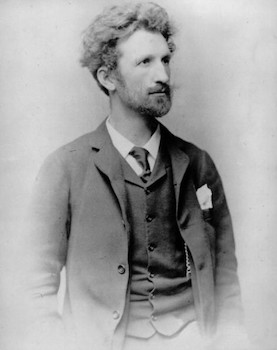 Bloody Sunday. Most often—before the film buffs’ recall of the 1971 John Schlesinger film Sunday Bloody Sunday, starring Glenda Jackson, Peter Finch and Murray Head—the phrase triggers memories of the Bogside area of Derry, 30 January 1972, when thirteen unarmed demonstrators were killed by British troops (a fourteenth died later), an event whose aftereffects are still very much with us.

But there was an earlier ‘Bloody Sunday’, 13 November 1887, when tens of thousands of protesters, in and around Trafalgar Square, were blocked—and columns of demonstrators broken up—by police, and troops. The politician John Burns and the writer and radical MP Robert Cunninghame Graham were among those beaten and imprisoned. It was, Fiona MacCarthy remarks, ‘the scene of the most ruthless display of establishment power that London has ever seen.’ There were more than 400 arrests and more than 200 marchers were treated in hospital, ‘only a fraction of the many people injured.’ A law copyist, Alfred Linnell, was killed, probably beneath the hooves of a police horse. William Morris, who had been present at ‘Bloody Sunday’, quickly produced a pamphlet, its cover by Walter Crane, sales of which went to the Linnell family. The funeral, another occasion for mass demonstration, was held on 18 December, the pall-bearers including Morris, Cunninghame Graham, the crusading journalist W. T. Stead and Annie Besant.[1] 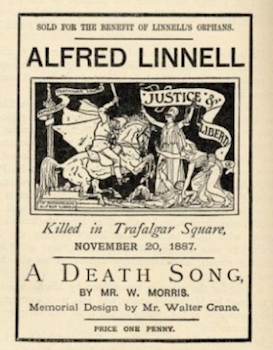 Here’s another socialist, half a century later, Naomi Mitchison, on a research trip to Edinburgh, 13 November 1941:

Going along Princes Street and up the Mount to St Giles, felt a queer kind of pride and anger; the lion flag was flying on some building, I could have kissed it. Walked into Parliament Hall, with its bloody awful stained glass—all the pictures are put away—and thought of James VI’s remark when young “There is ane hole in this Parliament” and suddenly felt the most passionate and disconcerting longing to be a member of the first Scots Parliament under the New Order, or maybe the Supreme Soviet of Scotland, working with the others all over Europe.’[2]

On one more 13 November, this one exactly one hundred years ago, an essay by a certain Ezra Pound: ‘Capital v. Labour is not the only conflict; there is also the endless conflict between the furnished and the half-furnished mind.’[3]

We stayed in Walthamstow in December 2017 mainly to be sure of finally getting to the William Morris Gallery. Housed in a mid-eighteenth century house, in which Morris lived between the ages of fourteen and twenty-two, the Gallery reopened in 2012 after a major redevelopment. We timed the visit to coincide with an exhibition of the work of May Morris, William’s younger daughter, artist and designer of wallpapers, jewellery, embroidery and much else: teacher, lecturer and editor of the 24-volume collected edition of William Morris’s works: http://maymorrisartandlife.co.uk/the-exhibition/

On this occasion of William Morris’s birthday (24 March 1834 – 3 October 1896), I was thinking of Peter Stansky noting that, among other paradoxes, Morris’s strong dislike of the Renaissance had to be set against his providing a fine example of what has become the conventional definition of ‘a Renaissance man’. Opposing the very notion of individual genius was a man of evident individual genius. As Stansky remarked, ‘What Morris was unprepared to recognize was that his was truly the exceptional case.’[1]

The narrator of L. P. Hartley’s The Go-Between remarks at one point, ‘I was in love with the exceptional and ready to sacrifice all normal happenings to it’.[2] Yes, that ‘normal’ – what is it and what has it become? I saw too a photograph, earlier today, in which a ‘March For Our Lives’ demonstrator in Washington held up a placard reading ‘This is not normal’. We said, of course, ‘Back to normal’ as the scheduled strike period ended and the Librarian returned to what was hoped and desired to be precisely that. But normality, like nostalgia, isn’t what it used to be. From the individual and small-scale to the national and supranational, the stable and the commonsensical have taken a vacation of unspecified length.

On that smallest scale—deliveries cancelled; collections missed; a plasterer working in the house—my own ‘normal’ wasn’t shaping up too well and, essentially, I needed to keep out of the way. Work on walls I might have dodged; work on ceilings made things a little trickier. So I walked to the newsagent, then out over the park to the station and caught a train to Bath.

It occurred to me, not for the first time, that, just as cats can immediately spot the one man or woman in the room unsympathetic to cats—and head straight for them—so men on trains with mobile phones and loud voices can pick me out in a crowded carriage—‘Hey, a guy with a book!’—and are thus able to position themselves behind my right ear before getting stuck in to a detailed and repetitive progress report on a telecommunications project, involving several individual contracts. The train ride was thirteen minutes long: when I arrived in Bath, the palms of my hands were slightly damp but I’d suffered no blackouts and the telecommunications man was still in rude health.

‘Mr. Valdes had a wonderful time, I think. It was rather exhausting for us, though, because he speaks scarcely any English, and he stayed from four till seven. We had sherry, which he seemed to regard as just “wine.” He kept saying “More wine” and he finished off the bottle, while Charlotte and I became sicker and sicker. The high point of the affair was when he and Charlotte imitated mosquitoes and buzzed around the room.’ And, ‘Since our patronage he has changed his sign (a palette stuck on the front of his cottage) from “Sign Painter” to “Artistic Painter”. . . ’[3]

But yes, that ‘normal’. Why Be Happy When You Could Be Normal? Jeanette Winterson entitled her memoir—in the course of which she wrote of the feelings of sympathy shared by people, even when they didn’t know one another, inside the giant tent during the church’s Glory Crusades. ‘The tent was like the war had been for all the people of my parents’ age. Not real life, but a time where ordinary rules didn’t apply. You could forget the bills and the bother. You had a common purpose.’[4] This was something that I already associated with my own late mother, not in a religious context but purely a social one. For my mother, it was a time when class barriers fell away and everyone was nice to one another and pulled together. Rarely, if ever, mentioned were those opportunities provided to—and enthusiastically taken up by—looters, murderers, rapists, black marketeers and fraudsters. It was, quite simply, the most exciting time—perhaps, unambiguously, the best time—of her life. And this widely-held view of the past, particularly that period of the past, had, I suspect, a strong bearing on the recent convulsions in this country.

Ideas of the normal change over time, with age, within social groups; and some are more obvious than others. The general shift to increasingly liberal social values makes the hundreds of capital offences current in the early nineteenth century, famously including such crimes as impersonating a Chelsea pensioner and damaging Westminster Bridge, almost comic now. And it was quite normal in the nineteenth century for the family album to have photographs of the infant dead, choreographed so that, with eyes open, they still seemed to be alive.[5] Now, I’m often struck by the extraordinary lengths to which some people go to avoid or conjure away the whole subject of death.

‘It may well be’, Allan Bloom observed, ‘that a society’s greatest madness seems normal to itself.’[6] A text for the times, you may think. Still, as Herbert Read noted, ‘it is perfectly possible, even normal, to live a life of contradictions.’[7]

So it is, so it is. I wonder, though, whether the possibility of not living a life of contradictions, is fast vanishing – if it has not already left the building.