Briefly: keep an eye on the ducks.

On Tuesday 1 November 1892, Olive Garnett reported to her diary: ‘To-day being All Saint’s Day Mamma called on Christina Rossetti with pink & white heath, her favourite flower. Miss Rossetti wishes nothing to be said about her state of health, life or anything else. She has heart disease & absolute quiet is indispensable. Practically she has left the world already.’[2]

Goblin Market, published in 1862, was an artistic and critical success of the kind dangerously liable to make everything that follows seem something of an anti-climax. The poem continues to provoke an astonishing range of interpretations, from Christian allegories of temptation and redemption through discussions of the marriage market and the constraints on talented and artistic women to debates about lesbian sexuality. There’s a wonderful collision between the way in which Rossetti is often seen—the ascetic  Christian poet who turned down suitors for religious reasons—and the lush and sensual language she uses in Goblin Market:

She cried “Laura,” up the garden,
“Did you miss me?
Come and kiss me.
Never mind my bruises,
Hug me, kiss me, suck my juices
Squeezed from goblin fruits for you,
Goblin pulp and goblin dew.
Eat me, drink me, love me;
Laura, make much of me:
For your sake I have braved the glen
And had to do with goblin merchant men.”[4] 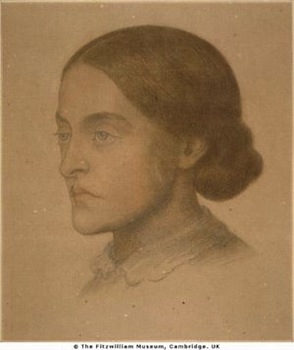 1 November is also the birthday of two poets with strong connections to the First World War, though both lived on into the 1970s. David Jones was born on this date in 1895. He had begun writing In Parenthesis (though it wasn’t published until 1937) when Edmund Blunden’s Undertones of War, another classic work about the war, appeared in 1928:

‘Fine days succeeded, and moonlit nights, temperate nights with their irresistible poetry creating a silver lake in the borders of Thiepval’s lunatical wood, a yellow harvest on the downs towards Mesnil the mortuary.’[5]

Blunden was born exactly one year after Jones, 1 November 1896. He was awarded the Military Cross in the same month twenty years later.

At the noon of the dreadful day
Our trench and death’s is on a sudden stormed
With huge and shattering salvoes, the clay dances
In founts of clods around the concrete sties
Where still the brain devises some last armour
To live out the poor limbs.[6]

Siegfried Sassoon told David Jones, when they met and talked in 1964, that, however hard he tried, he couldn’t get the Great War out of his system; and that this was also true of Blunden. Jones said it was true for him too. He told his friend Harman Grisewood he was glad that Sassoon thought highly of Undertones of War, ‘which I’ve felt to be one of the very best of those various accounts of that infantry war.’[7]

Born within a year of one another, dying in the same year (1974) and both largely shaped by their experiences in the Great War, they yet remained very different writers: Blunden with his devotion to English literature of the eighteenth and nineteenth centuries, to the pastoral tradition, to Englishness in its many forms and guises, whether villages, prose or cricket; Jones emerging as one of the major modernists, in both literature and the visual arts, often drawing on materials less familiar to the general reader: Welsh myth, Arthurian romance, the experiences of Roman legionaries in Britain, details of Catholic ritual.