On 30 October 1885 Ezra Pound was born in Hailey, Idaho. (‘Here he lies, the Idaho kid,/ The only time he ever did.’)[1] On 30 October 1947, Stella Bowen, painter and writer, died at the age of fifty-four, three weeks after the birth of her grandson, leaving her last painting (‘Still Life with Grapes’) unfinished.[2]

Stella met Pound during the First World War, when the studio she shared with her friend Phyllis Reid was lent for a party, to which Pound came. ‘To me’, Stella remembered, ‘he was at first an alarming phenomenon. His movements, though not uncontrolled, were sudden and angular, and his droning American voice, breaking into bomb-shells of emphasis, was rather incomprehensible as he enlightened us on the Way, the Truth, and the Light, in Art.’[3] Thereafter, largely through Pound, she and Phyllis met everyone: Eliot, Yeats, Wyndham Lewis, May Sinclair, Violet Hunt, Arthur Waley, Edward Wadsworth and others, including Ford Madox Ford. 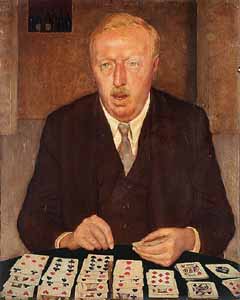 By the autumn of 1917, Stella was exchanging letters with Ford, she in London, he still stationed in Redcar, on the Yorkshire coast. They would live together for almost ten years. The first cottage they shared was Red Ford, in Pulborough, ‘a leaky-roofed, tile-healed, rat-ridden, seventeenth-century, five-shilling a week, moribund labourer’s cottage.’[4] ‘Penny, (not Pound) the goat, the sweet corn, Mrs Ford and the hole in the roof are still, here, going strong’, Ford wrote to Herbert Read in June 1920.[5] That summer, they moved to Bedham, ten miles away, while the indispensable Mr Hunt was still working on Coopers Cottage. Pound visited them there, ‘once, just before he and Dorothy migrated to Paris’, Stella remembered.[6] Or, in Ford’s own, lengthier version: ‘And Mr Pound appeared, aloft on the seat of my immense high dog-cart, like a bewildered Stuart pretender visiting a repellent portion of his realms. For Mr Pound hated the country, though I will put it on record that he can carve a sucking pig as few others can.’[7]

Two months before Pound’s visit to Bedham, the poet John Rodker published at The Ovid Press, in a limited edition of 200 copies, Hugh Selwyn Mauberley by ‘E. P.’ The press’s backers included May Sinclair and Pound himself but was primarily financed by Mary Butts, then married to Rodker.[8] Butts was one of the first friends that Stella made when she moved to London, when they both worked on a Children’s Care Committee in the East End.

Hugh Selwyn Mauberley is a long poem or suite of poems, numbering eighteen in all. The centre of the work (poems IX and X) is occupied by two poems contrasting different types of writer. The first, ‘Mr Nixon’, is often taken to refer to Arnold Bennett. Pound wrote to Ford that Rodker ‘thinks both he and I will be murdered by people making personal application of necessary literary constructions verging too near to photography.’ He went on: ‘My defence being that “Mr Nixon” is the only person who need really see red, and go hang himself in the potters field or throw bombs through my window.’[9]

A ‘potter’s field’ is generally applied to a burial place for paupers and unidentified strangers but Bennett, famously, was from ‘the Potteries’, his most celebrated novels (certainly up to 1920) all focusing on the ‘Five Towns’, centres of the pottery industry. In his prose collection Instigations, published in April 1920, Pound wrote of Wyndham Lewis’s Tarr (1918): ‘What we are blessedly free from is the red-plush Wellsian illusionism, and the click of Mr Bennett’s cash-register finish.’ When this essay was reprinted many years later, Pound added a footnote to the effect that he’d ‘rather modified his view of part of Bennett’s writing’ when he finally got around to reading The Old Wives’ Tale.[10] Still, three years before Virginia Woolf’s famous essay ‘Mr Bennett and Mrs Brown’, Pound has the same realist novelists in his sights; and there is a clear imputation to Bennett of predominantly mercenary motives.

What other ‘people making personal application of necessary literary constructions verging too near to photography’ might Pound’s poem suggest? The second type of writer in that central pair of poems, is termed ‘the stylist’:

Beneath the sagging roof
The stylist has taken shelter,
Unpaid, uncelebrated,
At last from the world’s welter

Nature receives him,
With a placid and uneducated mistress
He exercises his talents
And the soil meets his distress.

The haven from sophistications and contentions
Leaks through its thatch;
He offers succulent cooking;
The door has a creaking latch.[11]

‘Unpaid, uncelebrated’: a pretty stark contrast with the famous and successful ‘Mr Nixon’. If this draws—as it surely does—on Ford and Stella in their first Sussex cottage, just what does this imply about Pound’s view of Ford at this juncture? There’s sympathy—as you’d expect in a friendship that extended over thirty years—even an acknowledgement of the justification for that withdrawal, that ‘taking shelter’. But I think there are indications of something more, a taking leave, a sense of retrospect or valediction, for all the prominent use here of the present tense.

For himself, Pound feels, despite all the usual frustrations of shrinking periodical outlets, paltry funding, uncooperative editors and the rest, a sense of burgeoning strength after a hugely productive few years, culminating in Homage to Sextus Propertius (1919) and now Hugh Selwyn Mauberley, with the Cantos too definitely under way. As for the others, the ones who mattered to Pound: T. S. Eliot had published Prufrock and Other Observations (1917) and Poems (1919); Wyndham Lewis, like Ford, had been to the war but had also just published Tarr while, since March 1918, The Little Review had been serialising Ulysses by James Joyce, whose A Portrait of the Artist had appeared in 1916 and his Exiles in 1918. And Ford? Since 1915 and his entry into the British army, he had published only a handful of articles and stories, and one volume of poems, On Heaven and Poems Written on Active Service (April 1918). Pound’s brief review of that book was not a positive one (‘Time was when he held a brief for good writing’).[12]

Poem X is a subtle and artful performance, with its long first sentence and feminine rhymes; the polysyllabic ‘sophistications and contentions’ enacting just what ‘the stylist’ has retreated from, set against the plain language in which the—leaking—‘haven’ is described; these, together with the choice of verbs and the forms those verbs take, combine to suggest passivity and diminution. In fact, this is part of a long-running story, Pound always urging the active, the intense, the harder edge against what he felt to be Fordian impressionism’s softer, vaguer character and reliance on the visual. Still, there are hints here that, in Pound’s eyes, Ford’s strongest creative period might be over. Of course, as David Moody remarks, Pound ‘could not know that growing in the stylist’s mind was the best English novel of the Great War, a work of wide-angled and deep truth-telling that would cut to the heart of the war and culminate in a brilliantly written act of post-war reconstruction based on his life in that Sussex country cottage.’[13]

But then – a ‘placid and uneducated mistress’. Really? Stella? We may be tempted to see in ‘placid’ further hints of passivity or self-effacement or male constructions of ‘desirable’ qualities, considering at the word’s origins in the verb ‘to please’. And yet. . . the dictionary gives only ‘calm’, ‘not easily upset or excited’. As for education: Stella wrote that Pound ‘took the trouble to occupy himself with our joint education’—Phyllis Reid and Stella herself—and, wondering about his and others’ efforts, she remarked: ‘I can only suppose that they found my complete lack of education something of a novelty! The clean slate.’ Then too, reviewing her relationship with Ford, she recalled that, while he got his cottage, domestic peace and a baby daughter, she herself got out of it ‘a remarkable and liberal education, administered in ideal circumstances’.[14]

In the autumn of 1917, in Imaginary Letters, a series begun by Wyndham Lewis, Pound wrote of an ‘eminently cultured female’ named Elis—and her cousin, ‘who knows “nothing at all” and is ‘ten times better educated.’ She asks him ‘sane’ questions. She is ‘“wholly uneducated”. That is to say I find her reading Voltaire and Henry James with placidity.’[15] In the summer of 1914, Lewis had written that ‘[e]ducation (art education and general education) tends to destroy the creative instinct’ while Pound, in another 1917 piece, wrote that ‘[t]his little American had rotten luck; he was educated – soundly and thoroughly educated’.[16]

No, ‘uneducated’, for both Stella and Pound at this juncture, was not a particularly simple matter. In any case, the friendships continued, apparently untroubled by poems about stylists, mistresses and leaky havens.