I was thinking, as you do, about solace – to comfort in distress, to console or allay. Not really a word you bump up against on a daily basis, though individuals working with the bereaved or the clinically depressed may meet it or send it out into the world rather more frequently. I tend to connect it with the poem by Delmore Schwartz—‘All of us always turning away for solace/ From the lonely room where the self must be honest,/ All of us turning from being alone’—though in truth I always liked the title more than the poem itself. In his introduction to Schwartz’s work, Douglas Dunn quotes John Berryman’s Dream Song #150; and I’d forgotten that there is not one but a sequence of more than a dozen consecutive Dream Songs which are elegies for Schwartz, who died alone in a New York hotel room in 1966. [1]

Solace as consolation, then, which I’ve found in two contrasting situations just lately. This in the midst of national and international news which continues dark and darker. Along with millions of other people, we watched in horrified fascination the spectacle of the Senate judiciary committee hearing, admiring Dr Christine Blasey Ford’s courage while wondering aloud and often how a man who was behaving like that could ever have been considered a suitable candidate for the highest court in the land. O America!

But quickly to the solace—although, briefly detained by the thought of pessimism (Latin, pessimus, worst) and his sibling, optimism, I find a note from a William Gerhardie novel: ‘Our spacious pessimism, what is it? The squeal of a puppy. Life hurts, and then the night is starless, the world a desolating void where the wind groans and mutters and complains in our echo. But we go on, amazed, a little puzzled, inert, day-dreaming and unquestioning.’[2] I recall reading, more recently, a note to one of Patrick White’s letters which mentioned, admiringly, Charles Manning Clark, author of the standard history of Australia (in six volumes). Introduced to White about 1960, Manning Clark later told David Marr, the editor of White’s letters (also his biographer) that he was struck by the hunger on White’s face, ‘a hunger for forgiveness in a man who places himself, through his pride and pessimism, beyond the reach of forgiveness.’[3]

(Guild of Handicraft at the Silk Mill)

William Faulkner succinctly defined optimism by running a track through its supposed opposite: ‘Miss Jenny, being a true optimist—that is, expecting the worst at all times and so being daily agreeably surprised’.[4] More poignantly, looking back to the early years of the twentieth century and the removal of the Guild of Handicraft from the East End of London to a small market town in Gloucestershire, which thus became a centre of Arts and Crafts activity, Fiona MacCarthy writes: ‘The years of the Guild of Handicraft in Chipping Campden were something unique in the life of England. There had been experimental communities before but very few as large and as coherent as this one. It was an episode of unusual conviction, in its emphasis on aesthetic excellence and in its creation of a special kind of life-style, and in many ways it was a swan-song: such extraordinary optimism never came again.’[5]

The simple life—connects, in a way, with one of those positives. ‘I booked us on this’, the Librarian emailed me, briefly and to the point. ‘This’ was part of the Docks Heritage Weekend, a tour of the floating harbour aboard a Bristol ferry. There was ‘an authentic soundscape’, created from interviews with former dock workers, part of an oral history project, run by Amy King of the University of Bristol, and the audio was presented in conjunction with a superb shadow puppet show. The place was packed with both children and adults who, without benefit of box sets, flashing lights, virtual reality goggles or state of the art electronic devices, were thoroughly engaged—and many of them transfixed—by some recorded voices and puppets moving behind a screen, augmented by a pause at the pub for drinks and sea shanties. 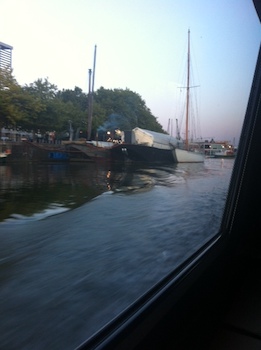 The day before that, I spent three hours in a busy emergency department—a precautionary visit, as it turned out—and, perhaps paradoxically, my time there was also restorative and curiously therapeutic. I had the advantage of the Librarian’s company together with the knowledge that my symptoms had receded very quickly: so I was at liberty to lie on the bed and watch and listen until the blood test results came back. Unsurprisingly, a lot of the patients there were very ill; a couple of those wheeled past were pretty obviously homeless people, who may have collapsed in the street or been referred by a concerned passer-by, while a morbidly obese woman, in evident pain, required the attentions of eight staff at one stage. Yet they all—doctors, nurses, porters, the man filling the paper towel dispenser and emptying the bins—went about their business so professionally, so composedly and efficiently, and with such good humour where appropriate, that it was curiously calming. Solace, yes.

It is in fact in Dream Song #150 that the word occurs, in the stanza that Dunn quotes:

I’d bleed to say his lovely work improved
but it is not so. He painfully removed
himself from the ordinary contacts
and shook with resentment. What final thought
solaced his fall to the hotel carpet, if any,
& the New York Times’s facts?[6]

[1] Delmore Schwartz, ‘All of Us Always Turning Away for Solace’, What Is To Be Given: Selected Poems (Manchester: Carcanet Press, 1976), 28; Douglas Dunn, ‘Introduction’, viii.